The Attitude to Take for Overcoming Natural Disasters 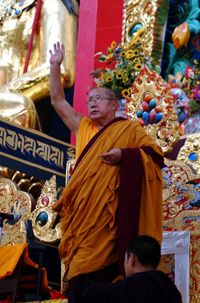 The Attitude to Take for Overcoming Natural Disasters

The present world is modernized and it is very easy for countries to communicate with each other. This has good -- and bad -- results. Everyone tells their own history and tries to explain events their way, according to internal political or religious pressures. At the same time, many religions exist in this world, as well as many qualified teachers. Anyone who is truly following their religion is thinking about how to solve the problems of this world. Meanwhile, most of the previously realized teachers have already shown us how to solve these problems for all of the beings in the universe.

But the times are now degenerating. Some of those following these religions and some who follow certain politics have gotten used to thinking and acting in a negative way. So it will not make a difference whether an individual is a good person or a bad person; we will be caused to suffer from difficulties because of our collective negative thoughts and actions. Of all these negative thoughts and actions, selfishness will create more difficulty than anything else.

That is why all the different kinds of religions are based on the benefit of all sentient beings and not focused on selfishness -- no matter what religion. Religions are for the benefit of peace and compassion for sentient beings, especially in the case of Buddhism. For us, we take vows to be helpful for all beings, without exception. We pray that we will not even use the space of one hair in a selfish way.

We already see that bad karma has the result of causing suffering. So then, of course, if we behave in a positive way, there will be benefit and fruition. If everyone -- no matter Buddhist or not, whether black or white -- prays and wishes for the same things, for happiness and peace on earth, then definitely things can be solved in a positive way.

Floods are the result of an imbalanced water element. There are also imbalances in the earth [such as earthquakes], fire [volcanoes] and air [tornados, typhoons and hurricanes]. If we are all living in harmony in the world, then naturally the elements will be balanced. Once harmonious, no imbalances will arise. [Tr. note: Rinpoche is referring to the example of sentient beings held like the objects in the pot of the elements. Once the inside is in balance, the pot will also be in balance].

When problems arise, like the Tsunami in Asia, or the flood in the United States, I personally feel very sad. It is physically hard to do anything to help.

We Tibetans also have recently faced so many problems. For example, for us, Guru Rinpoche and so many high lamas predicted we would encounter the problems we have met. They told us the method and how to solve the problems. But, because of degenerating times, collectively many of us had difficulty believing these predictions, which are hundreds, and sometimes thousands of years old. Because we collectively had difficulty believing in the truth, this came to be a difficult time for the Tibetans. Then, when the result came about, many people said, "Oh, we really made a big mistake." And a few even said, "Of course this was going to happen because we did not believe this prediction and follow the instructions."

So for us Tibetans, when we suffered, we suffered almost like a physical hell. Even still, we never gave up belief in the Three Jewels [Buddha, Dharma and Sangha].

All of these problems are the gathering of karma. [They are the consequences of our previous actions]. There is not anything to rejoice in or to regret because these are not one or two people's results, but all people's results. [Known as gathering or collective karma; Tib: Chin Thun]. Because of our past lifetimes in which we accumulated negative karma collectively, we must all collectively suffer the results. These results cannot be suffered by just one or two people.

We know that in the future we don't want this kind of suffering. So it doesn't matter what religion or color, we can build the positive collective karma together by loving each other and having compassion towards all sentient beings. This will make things better in the future so the positive result will come from the positive attitude.

May the Guru remain in the world for a long time to come, may the light of His teachings pervade the sky of mind and bring happiness to all. We requested this teaching on the attitude to take in the cases of natural disasters from the compassionate one, Kyabje Drubwang Pema Norbu Rinpoche, who responded to our request with enthusiasm. The teaching was translated by Lama Lobsang Chophel and took place on September 4, 2005. May these efforts serve to awaken the absolute reality of Guru Padmasambhava in the hearts of all beings.

Reproduced by permission of Palyul.org
© Copyright 1995-2006 by Palyul Ling.