Biographies of Other Realised Masters

Nyoshül Khenpo Jamyang Dorje Rinpoche, popularly known as Nyoshul Khen Rinpoche, was born in 1932 in the Derge region of Kham, Tibet. His interest in the Dharma was encouraged by his mother and grandmother who followed the teaching of Nyoshul Lungtok Tenpé Nyima, a disciple of Patrul Rinpoche. At the age of five, he began his Buddhist studies at a Sakya monastery. From the age of twelve, he began his studies with Rigdzin Jampal Dorje, performed the preliminary practices (Ngöndro) and received teachings on Mahamudra (Chakgya Chenpo). At age eighteen, he received his monastic vows from Thubten Gomchok Lekden at the Nyoshul monastery. He also received the Dzogpa Chenpo transmissionm of Longchen Nyingthig such as the Great Oral Lineage of Pith Instructions (Mengak Nyengyue Chenmo).

Hence forth, Longchen Nyingthig became his main practice which maintained an unbroken lineage from his master through Khenpo Ngakchung, Nyoshul Lungtok, Patrul Rinpoche, Jigme Lingpa, Longchenpa all the way to the Primordial Buddha. By age twenty-four, he became a Khenpo and had also mastered the practices of Chod, Kalachakra, Lamdre and the Six Yoga of Naropa while he spent several years studying at the Katong monastery. The one teacher who had the strongest influence in his life was Shedrup Tenpe Nyima, the reincarnation of Nyoshul Lungtok, who introduced Nyoshul Khenpo to the nature of mind and became his root guru.

In 1959, Nyoshul Khen Rinpoche left Tibet for India. He arrived in Calcutta where he lived among the local sadhus and experienced a lot of hardship. He gave empowerment (wang) to the newly arrived Tibetan refugees and tulkus and received teachings himself later on from Dudjom Rinpoche, Dilgo Khyentse Rinpoche and the 16th Gyalwang Karmapa. Many requests were extended to Nyoshul Khen Rinpoche from different monasteries to serve as their resident khenpo and he spent several years at the Namdroling Monastery in the 1970s. He later got seriously afflicted by illness during a teaching tenure in Kalimpong and became an invalid for several years. On the advice of Lopon Sonam Zangpo to take a wife and undertake longevity practice, he married Damchoe Zangmo and went to Switzerland for medical treatment. For eight years he lived in Dordogne, situated between the Loire Valley and Pyrenees mountains in France, and taught occasionally to students who were in retreat there before eventually setting up his home in Bhutan’s capital Thimpu, where he taught extensively.

With his health gradually improving, he started to accept invitations and taught in France, Britain, Switzerland, Germany, India, Nepal, the USA and Taiwan. In 1990, he visited Tibet for the first time since he left with Dilgo Khyentse Rinpoche and a second visit two years later with Penor Rinpoche. Revered as a supreme exponent of Dzogpa Chenpo, he was perceived by students as Longchenpa in the flesh. He wrote many definitive texts such as Marvelous Garland of Rare Gems: Biographies of Masters of Awareness in the Dzogchen Lineage, Natural Great Peace, and numerous poems which offer enlightened instruction and advice to students.

At 12 noon on Friday the 27th August 1999 at Antamnies, Dordogne, France, Nyoshul Khen Rinpoche entered into parinirvana and remained in thugdam meditation till the following Monday. Thugdam is a meditative process by which the inner dissolution of the five elements and consciousness were absorbed back into the Primordial Clear Light (ösal). On hearing the news of Nyoshul Khen Rinpoche’s passing, His Holiness Penor Rinpoche who was on a teaching tour in the UK at the time, cancelled his planned schedule and travelled to France to perform puja for Nyoshul Khen Rinpoche. Arrangement was then made to have the Holy Body (kudung) transported back to Bhutan. After the passing of Nyoshul Khen Rinpoche, Khandro Damcho Zangmo, his spiritual wife, performed thousands of prostration daily which she dedicated towards the swift rebirth of Nyoshul Khen Rinpoche. 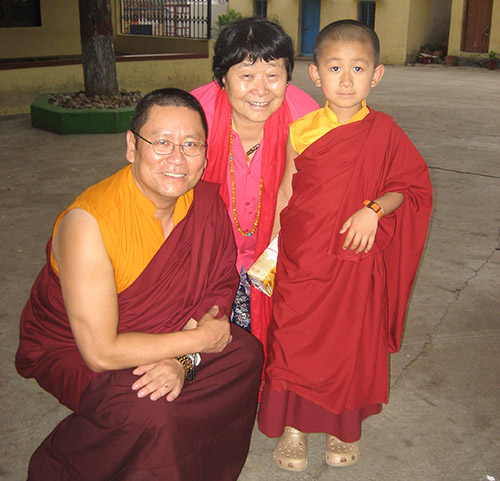 In 2008, during the Nyingma Monlam Chenmo in Bodhgaya, Nyoshul Khen Rinpoche Yangsi accompanied by Khandro Damcho Zangmo, was formally recognised and enthroned at the age of five in the presence of the His Holiness Penor Rinpoche.