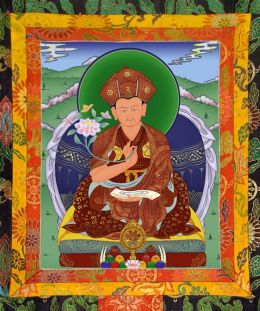 Karma Chagmed Rinpoche was born in the province Nyomtod region of Zalmo Gang in the tenth Tibetan rabjung year (1613). He was given the name Wangdrag Sung (Powerful Speech) at birth. Throughout his childhood, he displayed many wondrous signs of being a special child. From the age of eleven, he received from the great secret yogi, Prawashara, his root guru of many past lifetimes, many extensive empowerment and transmission. He diligently put the instruction he received into practice and attained great accomplishment in both the generation and the dissolution stages for each of the deities he practiced.

When he took his full ordination (gelong) at the age of nineteen, he was given the name Karma Chagmed and became a member of the sangha at the Thupten Nyinling Monastery in the same year. Known for his discipline and noble character, Karma Chagmed applied himself diligently and fulfilled all the accumulation of mantras he set out to accomplish in his practice. From the age of thirty-seven, he entered into a period of intensive retreat of Avalokiteshvara, Gyalwa Gyatso and the Mahamudra for thirteen years. After he left the retreat at the age of fifty, he performed many great accomplishment ceremonies during which many fortunate signs such as sweet fragrance in the air and rainbow colour in the sky manifested around him. He was regarded as the incarnation of Avalokiteshvara, Guru Padmasambhava, Songtsen Gampo, Gyalsei Sednaleg, Luyi Gyaltsen and Milarepa.

Karma Chagmed Rinpoche propagated Buddha Doctrine far and wide to many students by giving empowerment and transmission on Namcho, Sangye Lagchang, Tse-Lung and many other profound revelations. His foremost disciples included Kunzang Sherab, Pema Rigzin, Ratna Bidza and many others. In the eleventh rabjung year of the Earth Horse (1678 AD), when Karma Chagmed Rinpoche was sixty-six, he informed his students that it was time for him to go to Dewachen (the realm of great bliss). On the first day of the sixth month of the same year, Karma Chagmed Rinpoche condensed his mind into the heart of Buddha Amitabha and entered the realm of great bliss.

During the cremation ceremony, the sky was filled with rainbow colours which appeared like pitched tents amongst white clouds which manifested in the form of the eight auspicious symbols. In spite of the fierce heat of the cremation fire, the brain, heart and tongue of Karma Chagmed Rinpoche remained undamaged and clear images of the Wrathful Deities of Chemchod, Gurdrag, Drolod and the syllable AH appeared in the organs. The sarira (bones relics recovered from the cremation ashes) were found to bear the embossed images of Avalokiteshvara, Dechog, Phagmo and the eight auspicious symbols.