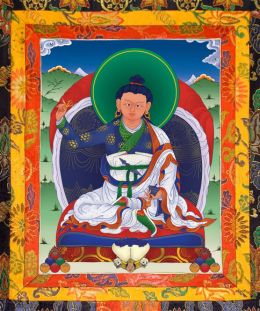 The Great Terton (Treasure Revealer), Vidyadhara Migyur Dorje was born in Nhom Tod Rola in the province of Kham in Eastern Tibet on the seventh day of the ninth month of the Wood Bird Year (1645). He was born with a unique blue mole on his right hand which indicated he was blessed with the heart-essence of Dharmakaya (The Body of the Ultimate Truth).

As a small child, he enjoyed using his hands to perform mudras (Dharma hand gestures) and carried out secret yogic exercises by himself. As soon as he could speak, he told others that he was a lama of the Kathog tradition and was able to give detailed description of his previous life at the Kathog Monastery.

During his childhood, he had many visions of Great Masters such as Guru Loden Chogsed, Karma Chagmed and many Dakinis (Female Wisdom Deities). Through the transmission of the lineage of symbolic indication, he learned how to read and write through gestures he observed. When he was ten years old, he met Karma Chagmed Rinpoche in person and received purification blessing of Nam Jom and Dor Sem, and the transmission of Thug Drub Yang Nying Dupa (Innermost Essence of the Mind Accomplishment). The following year, Migyur Dorje entered into retreat with the Great Mahasiddha, Karma Chagmed Rinpoche. At the retreat, Migyur Dorje received continual visions of Buddha Amitayus, Guru Padmasambhava, Buddha Amitabha, Avalokiteshvara and many others Yidams (Meditational Deities). From each of the Yidams, Migyur Dorje received many specific empowerments and transmissions. These he compiled into thirteen volumes called Nam Chö (Space Treasures) and practiced with single-pointed focus until he attained the full accomplishment of each of these treasures.

Due to the lack of merit of sentient beings to provide the appropriate support of karmic conditions for the propagation of Buddha Dharma, the life of Terton Migyur Dorje was cut short. On the evening of the sixteen day of the third month of the year of the Fire Sheep (1667 A.D) at the age of twenty-three, Terton Migyur Dorje entered into the pure realm of the ultimate truth while sitting upright in a state of meditative equipoise.

At the cremation, rainbows in the shape of pitched tents appeared in the sky. The heart and tongue of Migyur Dorje was undamaged by the fire. These, together with the sarira (bones relics) embossed with vowels and consonants of the Tibetan language were placed inside golden stupas, which served as objects of refuge revered by devotees to this day.