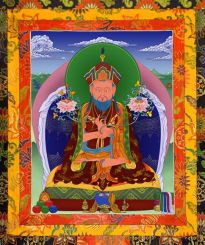 Kunzang Sherab was born in the province of Do-Kham in the region of Bubor on the eleventh rabjung year of the Fire Rat (1636 A.D.). He showed great capacity of compassion as a small child and would not cause harm to even the smallest creature under any circumstances. His connection to Dharma is so strong that he could memorize a great score of prayers at a tender age. With enthusiastic effort, he applied himself diligently in his practice and in the process actualised realisation of the instruction he received and showed signs of accomplishment in his practice.

When a new monastery was built by King Lhachen Jampa Phuntsog and Trichen Sangye Tanpa, they named it Palyul Namgyal Chanchub Choling and invited Kunzang Sherab to serve as the Head of the new Palyul Monastery. Encouraged by his guru, Terton Migyur Dorje to fulfil the prophecy on the advent of Palyul tradition by Guru Padmasambhava, Kunzang Sherab, at the age of thirty, assumed the position as Head of the Palyul Monastery on the eleventh rabjung year of the Wood Snake (1665A.D.). Through skilful means and compassion, he guided many sentient beings towards the path of Dharma and nurtured a great number of disciples who displayed signs of success in their practices. Several had even actualised the attainment of rainbow body.

On the fifth day of the first month of the year of Earth Rabbit (1699 A.D.), Kunzang Sherab dissolved his body into the pure realm of the ultimate truth at the age of sixty-four. Although it was the coldest month of the year at the time of his passing, the weather suddenly became very warm and spring-like with shoots sprouted and buds flowered out of season. When his disciples and monks from the monastery performed offering prayers in his honour, many experienced an extended period of clear light awareness. During the subsequent cremation ceremony, clouds of auspicious signs and rainbow filled the sky. The sarira (bones relics) at the completion of the cremation included the skull embossed with the syllable AH. These sarisas together with the Longsal Terma of Avalokiteshvara were placed inside a stupa erected in honour of the Great Vidhyadhara.