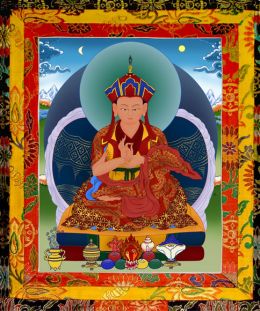 Pedma Lhundrub Gyatso was born in the province of Do Kham in a place known as Seng-gang in the eleven rabjung year of the Iron Rat (1660). His birth was prophesised in Terton Duddul Lingpa Vajrakilaya Terma as the reincarnation of Sogpo Lhapal, one of the twenty-five disciples of Guru Rinpoche.

From the age of eight, Lhundrub Gyatso started to receive all the Nam Chö empowerment, transmission and secret instruction from Vidyahara Migyur Dorje. At sixteen years of age, he went to Palyul Monastery to receive more profound instruction on personal attainment from his uncle, the Vidyadhara Kunzang Sherab. By the time he was twenty-five, he came into direct experience with the true nature of the mind. Under the continued guidance of his uncle Kunzang Sherab who transmitted to him the Secret Oral Transmission lineage, Lhundrub Gyatso advanced his accomplishment with great enthusiastic perseverance. He took on the responsibility of transmitting the sutra and tantra at the Palyul Monastery after Kunzang Sherab dissolved his body into the pure realm of the ultimate truth at the age of sixty-four. At the age of fifty-four, he became the second Throne Holder of the Palyul Lineage. Under his charge, propagation of Buddha Doctrine flourished in all directions.

At the age of sixty-eight, on the tenth day of Saga Dawa in the year of the Fire Sheep (1727), Pema Lhundrub Gyatso entered into a state meditative equipoise, then his body dissolved into the sphere of clear light while loud thunder reverberated and streaks of lightning lit up the sky. During the proceeding of his cremation, rainbows like treasure vases and wish-granting trees appeared on the sky and the images of deities could be seen clearly in the smoke. A great number of precious sarira (bones relics) was found in the ashes.