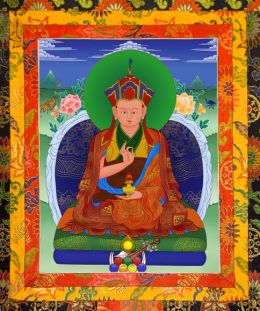 The birth of the first Drubwang Pedma Norbu Rinpoche as an emanation of the great Pandit Vimalamitra and the Vidyadhara Terton Jatson Nyingpo was prophesised in Terton Jatson's Nyingpo's Ma-ning revelation. He was born in Chagril near the town of Ahchog in the eleventh rabjung year of the Earth Sheep (1679).

From his root guru Pema Lhundrub Gyatso, he received all the transmissions and practices belonging to the Palyul lineage. Due to his success in attaining accomplishment in all the teaching he received, he was given the title 'Drubwang' which means the Powerful Lord of Accomplishment. When Drubwang Pedma Norbu performed the Lama Cham of Vajrakilaya from the Sakya tradition at the palace of Tenpa Tsering the Dharma King of Dege, the audience was astonished to notice his feet did not appear to touch the ground. At the age of seventy-nine, the first Drubwang Pedma Norbu Rinpoche dissolved his mind into the pure sphere of truth. His body was reverently preserved inside a wooden stupa, which was assembled within the private chamber of his residence, and there he remained.