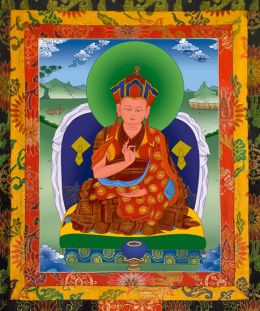 The first Karma Kuchen was born as Karma Tashi in the twelfth rabjung year of the Earth Monkey (1728) in the town of Ahchog in Do-Kham. His birth was foretold in many prophecies. He was recognised as the incarnation of the condensed essence of many Great Vidyadharas of the past. Karma Tashi himself recalled he was a manifestation of Migyur Dorje. Other revelations acknowledged him as the body emanation of Kundrol Namgyal, the speech emanation of Kathog Drimed Shing Kyong and the mind emanation of Duddul Dorje.

He became the heart disciple of Drubwang Pedma Norbu and received all the transmission and practices of Mahamudra and Dzogchen from his root guru. He was enthroned by Drubwang Pema Norbu as the fourth Throne Holder of the Palyul Lineage in the presence of the thirteenth Karmapa Duddul Dorje and the tenth Sharmpa Chodrup Gyatso. With great vision to promote Dharma to greater height, he propagated strict doctrine among his disciples and established many retreat facilities within the grounds of the monastery.

At that time, Tsenltha Rabten, King of Gyarong had been at war with China for thirteen years when Karma Tashi was invited to China. A Bonpo lama who served as the guru of King Rabten decided to use his power of black magic to unleash a massive shower of rocks upon the Chinese forces from the sky. Out of compassion for the safety of the Chinese troop, Karma Tashi offered special protection cords to the soldiers to protect them against the ill fortune of war. As a result, not one single soldier who wore his protection cord was harmed and Tsenltha Rabten was defeated. It was an overwhelming victory for China and the Chinese Emperor Chan Lung, in a gesture of gratitude, appointed Karma Tashi as the State Guru of China.

Karma Tashi, also known as Chopal Zangpo, dissolved his mind into the pure realm of truth at the age of sixty-three. The sarira (bones relics) he left behind was preserved within a bronze stupa placed inside the Chag-dra-khang temple of Palyul monastery.