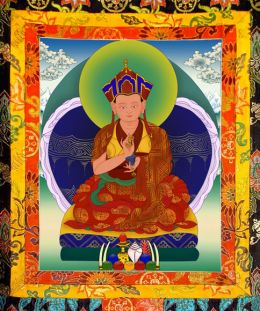 Similar to his root guru Karma Lhawang, Karma Gyurmed preferred to spend his time in solitary retreat. His principle Yidam in his Three Root practice was Vajrakilaya and he had frequent vision of the full assembly of all seventy-five deities of his Yidam. In one pure vision, he received a visit by Guru Rinpoche who instructed him to introduce the Mendrub Accomplishment Ceremony (the tantric ritual of making dharma medicine) into the Palyul Monastery. Karma Gyurmed also started the tradition of performing the Lama Cham of the Eight Manifestation of Guru Rinpoche, on the tenth day of each Losar, in accordance to the pure vision of Guru Chowang (1212-1270).

Karma Gyurmed's accomplishment in the Dzogpa Chenpo enables his disciples to heighten their insight simply by hearing his voice. He sometimes performed miraculous activities for the purpose to remove the mental defilements from sentient beings, such as reading the thought of their mind and in one case left a foot print indentation in a rock by the hot spring of Tilung.

On the twelfth day of the fifth month of his fifty-eighth year, Karma Gyurmed instructed his disciples to prepare a host of offerings when he became aware of the presence of the Buddhas of the three times around him in every direction. The following day, Karma Gyurmed dissolved his mind into the pure realm of truth. His life-like body shrank to the size of mere eighteen inches in height while the sky was filled with extraordinary cloud formations and rainbows. Gyatrul Rinpoche built for his root guru a temple and a two-storey stupa of gold and copper into which the body of Karma Gyurmed, the second Karma Kuchen Rinpoche was placed.