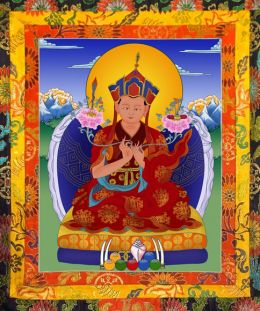 Gyatrul Rinpoche was born amid many extraordinary phenomena into the household of a Chinese Emperor’s minister in Gyalmo Tsawai-rong in the fourteenth rabjung year of Iron Tiger (1830). His birth was prophesised in Terton Sangngag Lingpa’s revelation. Since the young boy exhibited signs of pure awareness and demonstrated accomplishment in Tse Lung (Subtle Energy Qigong) from an early age, Karma Gyurmed had no trouble to recognise him as the incarnation of Kunzang Sherab. Blessed with incredible faculties in reading, writing and perception, the young Gyatrul Rinpoche could remember the many incarnations from his past life as Rongton Shung-Gya, Shakya Gyaltsen and Kunzang Sherab. He could also give an accurate description of the Palyul Monastery from memory of his previous life. At ten years of age, he received the Nam Cho Ngondro practice from Lama Sangye Yeshe. Two years later, he arrived at the Palyul Monastery and was duly enthroned.

The young Gyatrul Rinpoche received from Karma Gyurmed all the transmissions of kama and terma of the Palyul tradition, then spent three years in the practice of Ratna Lingpa’s three kaya mind accomplishment. After taking his full ordination (gelong), he spent two years at the Palpung retreat centre with Jamgon Lodro Thaye from whom he received guidance in Sanskrit, poetry and literature. He went on to receive from Jamgon Lodro Thaye other profound transmissions and empowerments such as Rinchen Ter Dzod, Dam Ngag Rinpoche Dzod and Dukhor Wangchen. Gyatrul Rinpoche also received from Jamyang Khentse Wangpo all the transmissions of Longchen Nyingtig, Gyud Lug Phurba, Yonten Dzod and the two traditions of the view and practice of Bodhicitta - that of the ‘Profound View’ passed down from Manjushri, and that of the ‘Vast Conduct’ passed down from Maitreya.

It was said that Gyatrul Rinpoche was watched over by many dharma protectors during his practice. Through his tireless effort and the support of his Yidam, Gyatrul Rinpoche was able to assimilate the understanding of a great number of Buddhist Doctrines and frequently gave the impression as if he knew them by heart from memory. He continued to manifest signs of authentic accomplishment and pure awareness in both generation and completion stages of Dzogpa Chenpo. Gyatrul Rinpoche devoted his entire life to propagating Buddha Doctrine. He gave ordination vows to thousands of monks; repeatedly gave many cycles of transmissions and empowerments to countless disciples; printed many scriptures and sponsored the new construction of stupas and temples.

On the twenty-second day of his sixty-second year (1891), Gyatrul Rinpoche entered into a serene state of meditative equipoise and passed into the pure realm. His body was placed within a newly completed two-storey stupa next to the Vajrasattva temple.