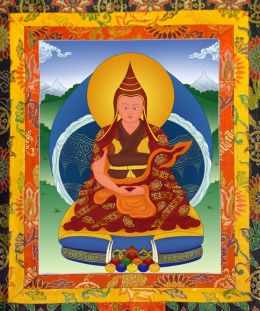 The third Karma Kunchen Rinpoche Do-ngag Chokyi Nyima was born in Ahlo Khateng in the fourteenth rabjung year of the Wood Tiger (1854). His birth was prophesised by a letter left behind by Karma Gyurmed, which clearly indicated the location of the birth. As befitted the birth of a great lama, light of rainbow colours suffused the sky and awe-inspiring resonances echoed through the air.

The fourteenth Karmapa gave Do-ngag Chokyi Nyima the Refuge Vow and soon after he was enthroned as the eighth Throne Holder at the Palyul Monastery. After he received the full ordination (gelong), he was given the formal name Orgyen Do-ngag Chokyi Nyima. Transmission from many sources including those of the Palyul tradition were given to Do-ngag Chokyi Nyima by Gyatrul Rinpoche, Washul Lama Sonam Namgyal, Khang nang Lama Tashi Phuntsok, Dzogchen Dorje Rabten, Jamyang Khentsey Wangpo, Jamgon Kongtrul Rinpoche, Lhatrul Pedma Garwang, Drubwang Drodul Pawo Dorje, and many other eminent masters of the time.

Do-ngag Chokyi Nyima’s mind was full of compassion for all sentient beings. Much as he wished to be in solitary retreat, he opted instead to follow his root guru Gyatrul Rinpoche’s advice and devoted his life to propagating Buddha Doctrine. Regardless of how busy was his schedule, his personal practice started daily without fail at three in the morning. His successful attainment of having the mind inseparable from the four elements enabled him to performed many extraordinary deeds, which were deemed as miraculous by others.

In the fifteenth rabjung year of the Fire Horse (1906), Chokyi Nyima dissolved into the pure realm of clear light. He was fifty-three years old. During the cremation ceremony, cloud formations resembling large tents manifested across an otherwise cloudless sky, accompanied by a mild shower of light rain. A large number of sarira (bones relics) were found on the ground. These were gathered together and placed within a stupa of gold and copper that was constructed to the left of the Avalokiteshvara temple.