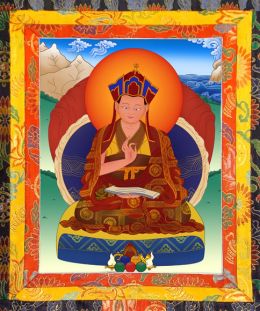 The second Drubwang Pema Norbu was born in the fifteenth rabjung year of the Fire Pig (1887) under the exact circumstances as prophesised by the first Pema Norbu. When he was seven year of age, he was taken to the Palyul Monastery where he received a full range of transmissions and empowerments from Do-ngag Chokyi Nyima, Palpung Lama Tashi Chophel, Khenpo Gyalsten Odser, and other eminent Lamas of the time. He received full ordination (gelong) from his root guru Khenpo Ngawang Palzangpo and was given the formal name Thubten Chokyi Langpo. Under the guidance of his root guru, the Second Pema Norbu actualised the full potential of Dzogchen Togyal and exhibited signs of having attained the view of the clear light, which exists in all phenomenon. He went on to receive Longchen Nyingtig transmission from Drodul Pawao Dorje, the Peaceful and Wrathful Manjursri transmission from Mipham Rinpoche, and the Chog-gyur Lingpa Thugdrub transmission from Jamgon Khomtrul Rinpoche. The devotion of the Second Pema Norbu to Do-ngag Chokyi Nyima was of such strength that even after the third Karma Kunchen Rinpoche had passed beyond this world, his precious guru still returned in a dream and gave the second Pema Norbu the entire transmission of the Kagyed Desheg Dupa.

The second Pema Norbu was a scholar unequalled by his contemporaries. He was extensively schooled in the study of medicine, astrology, geomancy, poetry, Sanskrit, sand mandala construction and the ritual of chanting. He dedicated his life to propagating Buddha Doctrine in a diversity of dharma activities. When he was not in solitary retreat, he tirelessly gave teaching to students, sponsored the new construction of temples and shedras, commissioned new printing blocks for the production of dharma texts, and made numerous generous offerings to support the sanghas of other monasteries.

In the autumn of 1931, the Second Drubwang Pema Norbu went into retreat at Khachu Trag. It was there he fell ill after he ate some food of questionable origin. His health gradually deteriorated. On the third day of the third month of the sixteenth rabjung year of the Water Monkey (1932), his mind entered into a meditative state of dhyana. He was forty-six year old. Khenpo Ngaga made many prayers wishing the second Drubwang Pema Norbu a swift rebirth and after some time awakened his heart disciple from the absorptive state of samadhi. At the cremation ceremony a few days later, the earth shook; rainbows filled the sky; wafts of fragrance were in the air, while ritual music materialised of its own accord echoing the space. The precious sarira (bones relics) of the second Drubwang Pema Norbu was placed inside a one-storey golden stupa that was constructed next to the main temple.