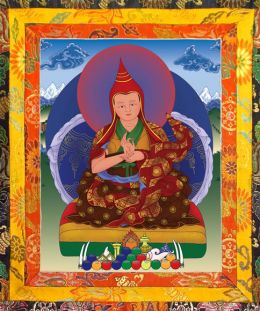 The fourth Karma Kuchen Rinpoche, Thegchog Nyingpo was born in the fifteenth rabjung year of the Earth Monkey (1908). He was recognised in accordance to the prophecy of the fifteenth Karmapa Khakyab Dorje and authenticated by Drodul Lama Azom Drugpa. After being enthroned as the tenth Throne Holder at the Palyul Monastery, he began his study in sutra and tantra and received all the lineage transmissions from the second Drubwang Pema Norbu, the Dzogchen Khenpo Rigdzin Odzer, Jamgon Tai Situ Pema Wangchog Gyalpo, Drodul Lama Azom Drugpa and Kathog Khenpo Legshed Jordan. He became excelled in all the teachings he received and attained an all-encompassing mind that merged with the true nature of transcendental reality. Soon after the completion of a three-year retreat during which his main practice was Ratna Lingpa's Three Kaya Accomplishment, Thegchog Nyingpo commenced his service to all sentient beings by giving teaching, transmission and empowerment to a multitude of followers. During his lifetime, he commissioned the making of many thangkas and statues, having scores of Dharma texts printed, old temples renovated, new constructions erected, and gave generous support to a great many sangha communities elsewhere.

When Thegchog Nyingpo was fifty-one years of age, he decided it was time for him to pass beyond this world and transferred his life essence into the body of rainbow luminescence leaving nothing tangible behind. Twelve years later, in the rabjung year of the Iron Dog (1970), the incarnation of Thegchog Nyingpo, the fifth Karma Kuchan Rinpoche was born in South India. He was recognised and confirmed by H.H. the Third Drubwang Pema Norbu Rinpoche and H.H. Dudjom Rinpoche. The fifth Karma Kuchan Rinpoche was duly enthroned as a tulku and began his study of Buddhist Doctrine at the Namdroling Monastery. On the 14th of August 2000, the fifth Karma Kuchen Rinpoche was formerly enthroned at the main seat of Palyul Monastery in Tibet.