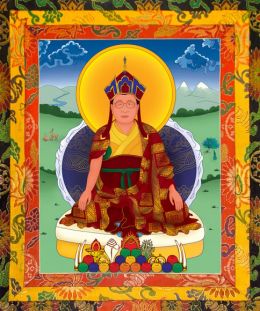 The third Drubwang Pema Norbu Rinpoche was born in the year of the Water Monkey (1932) in the Powo region of Kham, in South-Eastern Tibet. Details of his birth were exactly as described in the prophecy of Thubten Chokyi, the fifth Dzogchen Rinpoche. The incarnation of the second Drubwang Pema Norbu was recognised by Khenpo Ngaga Rinpoche. At the age of four, the small child was enthroned by Thubten Chökyi Dawa and Karma Thekchok Nyingpo at the Palyul Monastery. There he began his study in sutra and tantra from a full range of Nyingma lineages and received all the transmissions and empowerments from Khenpo Ngaga Rinpoche, the second Choktrul Rinpoche, the fourth Karma Kuchen Rinpoche, Khenpo Legshed Jordan, Khenpo Lodrö, Pema Jigmed, and other eminent Masters at the time.

The third Drubwang Pema Norbu Rinpoche applied himself diligently in dharma practice. It took a mere seventeen days for him to complete one hundred thousand accumulations of prostrations in the Ngondro preliminary practices of Nam Chö Dzogchen's 'Liberation in the Palm of the Hand'. Under the guidance of his root guru, he went into a four-year retreat and attained accomplishment in all the stages of the practices he received. By the time they came out of the retreat, Chogtrul Rinpoche proclaimed that the third Drubwang Pema Norbu Rinpoche was the only lama at the time who held the the entire lineage of Terton Migyur Dorje's Nam Chö and Ratna Lingpa's revelations.

During the 1950s, the third Drubwang Pema Norbu Rinpoche made numerous pilgrimages across Tibet to all the major holy sites to which he made generous offerings. He continued to propagate Buddha Doctrine far and wide through the sponsoring and supporting of a diversified range of compassionate activities. In 1959, the third Drubwang Pema Norbu Rinpoche decided to relocate to India for the sake of preserving Buddha Doctrine for the sake of all sentient beings. Accompanied by a small group of monks, he settled in the region of Bylakuppe in Mysore, South India.

In the year of the Water Rabbit (1963), under the personal supervision of the third Drubwang Pema Norbu Rinpoche, the Thekchog Namdrol Shedrub Dargye Ling (Namdroling monastery) commenced its first phase of construction. From the beginning of a small bamboo temple with a handful of monks in 1963, the main seat of the third Drubwang Pema Norbu Rinpoche in India now includes numerous temples, stupas, primary schools, dratsang, shedras, retreat centre, nunnery, guest house, old people's home and hospital, it has evolved to become the largest Tibetan monastery in India with a ordained sangha of over six thousand monks and over one thousand nuns. Apart from propagating Buddha Doctrine in India and in Tibet, to where he has made return visits since 1982, the third Drubwang Pema Norbu Rinpoche has established many dharma centres around the world, including the USA, Canada, Mexico, Taiwan, Hong Kong, Macau, Philippines, Singapore, Malaysia, Nepal, Bhutan, United Kingdom, Greece, Germany, Switzerland, Australia, and Portugal. On the evening of 27th March 2009 (the first day of the second Tibetan month), the third Drubwang Pema Norbu Rinpoche departed from this world and entered the meditative state of thugdam. After spending six and a half days in the meditative state of luminosity, on the morning of Friday 3rd April 2009, he released his body from meditation and entered Parinirvana.