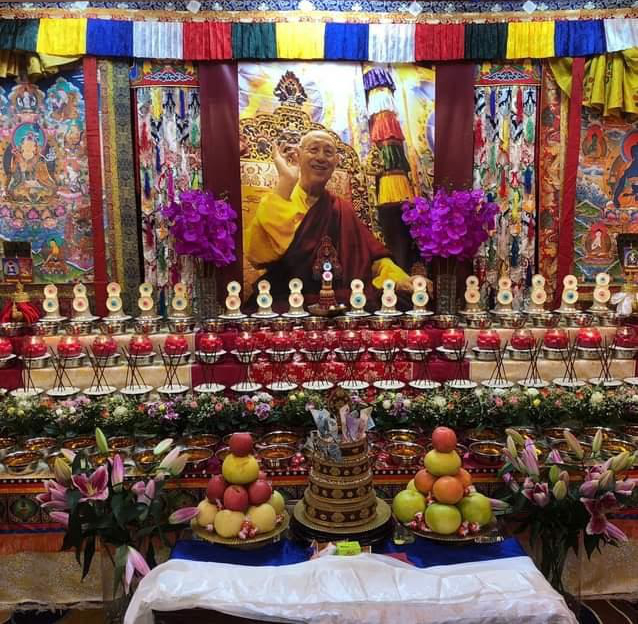 Kyabje Thubten Palzang Rinpoche (Tulku Thubsang Rinpoche) was born in the year of the Fire Rat (1936) in the ancestral heritage of the Second Pema Norbu Rinpoche, in the Dege County of Kham, Eastern Tibet. At the age of three, he was recognised as the incarnation of Konchog Tenpal Gyaltsen by the great Kathog Khenpo Ngawang Pelzang, who was also known as Khenpo Ngaga and Khenpo Ngakchung (1879–1941). Khenpo Ngaga was the disciple of Nyoshul Lungtok Tenpal Nyima, an incarnation of Abbot Shantarakshita who received all the Nyingtik transmission from Patrul Rinpoche and attained the utmost accomplishment of  Dzogpa Chenpo, the Great Perfection.

At the age of six, Tulku Thubsang Rinpoche was invited to stay at the Palyul Monastery. As the younger dharma brother of the Third Drubwang Pema Norbu Rinpoche and Dzongnang Rinpoche, they studied and practiced under the direct guidance of Khenchen Ngaga and received teachings and empowerments together from many realized masters such as the Kagyed Do Wang Chenmo (Great Empowerment of the Eight Herukas) and the Rinchen Ter Dzod (Precious Terma Treasury) from the Second Chogtrul Rinpoche; the Namcho (Space Dharma Terma), Nyingma Gyübum (Collected Tantras of the Nyingmapa), and the Gongdu Drubwang Chenmo (Great Accomplishment Empowerment of the Condensed Enlightened Mind) from the Fourth Karma Kuchen Rinpoche; the Dam Ngagyur Dzod (Treasury of Essential Instruction), the Do Wang Drangtsi Chu Gyun (Anu Yoga - Continual Flow of Nectar), and the Lama Kadu (Condensed Utterance of the Lama), from Khenpo Legshed Jordan; the Fu Do Drelwa (Anu Yoga Commentary) from Khenpo Khyentse Lodro; and all the Longchen Nyingthig empowerments and transmissions from Lungtok Chogtrul Rinpoche.

Tulku Thubsang Rinpoche displayed extraordinary attentiveness in learning as a child. He could retain teaching in its entirety by having heard it or read it only once. His teachers remarked that Tulku Thubsang Rinpoche must had for many life times held the great aspiration to attain absolute accomplishment just as that of the great Pandita Sakya Panchen.

In the late 50s, When the unfolding of political turmoil became inevitable in Tibet, HH the Third Drubwang Pema Norbu Rinpoche together with 300 monks went to India in order to preserve the Palyul Nyingma lineage of Buddhadharma. Palyul Monastery was left in the care of Tulku Thubsang Rinpoche. Many Tibetan monasteries including Palyul Monastery were subsequently destroyed and Tulku Thubsang Rinpoche was incarcerated on two occasions. The first time for one month and the second time for eight months. Upon release from prison, Tulku Thubsang Rinpoche became a vagabond, wandering from one place to another, maintaining his practice wherever he stopped for respite among mountains and forests. He experienced a lot of extreme hardship during the years of famine and the cultural revolution in the 60s. He was put to work as a hard labourer in the fields and came upon countless challenging conditions. His main practice at the time was Tonglen (the giving of happiness to others in exchange of their sufferings). Nonetheless he harboured no resentment towards his oppressors for his compassion was inexhaustible. Instead his faith in the Three Jewels became even stronger.

As the government legislation became more relaxed in the 80s, Tulku Thubsang Rinpoche was given permission in 1982 to rebuild Palyul Monastery. With support from both sponsors and the government, Tulku Thubsang Rinpoche was able to renovated the Stupa of terton Namcho Migyur Dorje, and started the construction of a new Zangdok Palri Palace (Guru Padmasambhava Temple).

In 1984 Tulku Thubsang Rinpoche went to India and stayed at Namdroling Monastery for one year and two months. Afterwards he visited Dilgo Khyentse Rinpoche and Chatral Sangye Dorje Rinpoche in Nepal before returning to Tibet. 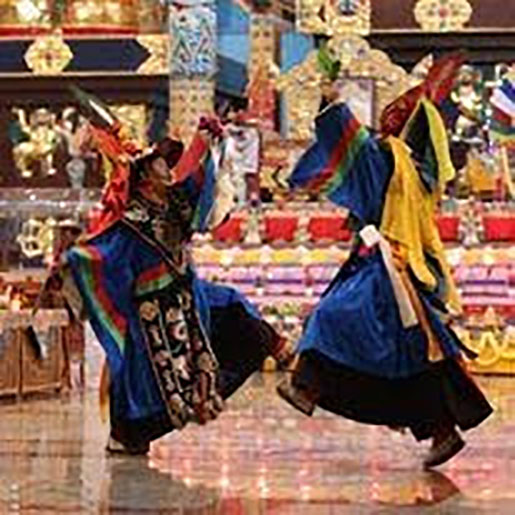 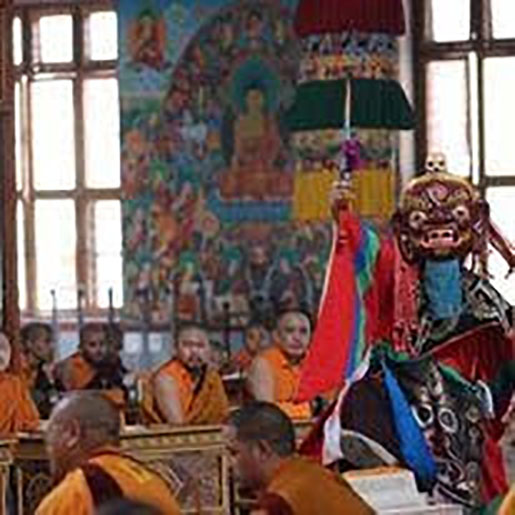 In 1986, under the guidance of Tulku Thubsang Rinpoche who was an experienced Champon (Vajra Dance Master), Tsa-Cham (Root Lama Dance) celebration was performed for the first time since Palyul Namgyal Jangchub Choling Monastery was rebuilt.

In 1987, Tulku Thubsang Rinpoche renovated the building of the Shedra (College of Buddhist Studies). The following year, working together with over thirty monks, the construction of a new Retreat Centre with individual rooms for the retreatants was completed that can accommodate forty monks for a three years three months retreat.

In 1994, the Shedra was changed to the status of  university and renamed as Ngagyur Institute of Higher Buddhist Studies with a nine years study programme. Tulku Thubsang Rinpoche became the first Principal of the Institute. The construction cost of the many new buildings for the Institute together with all the clothing, food and basic needs of the students were sponsored by HH Drubwang Pema Norbu Rinpoche. Two hundreds students were enrolled in the first year.

In 1998, Tulku Thubsang Rinpoche established a school affiliated to the Institute to provide free education to both adults and children in need of support. 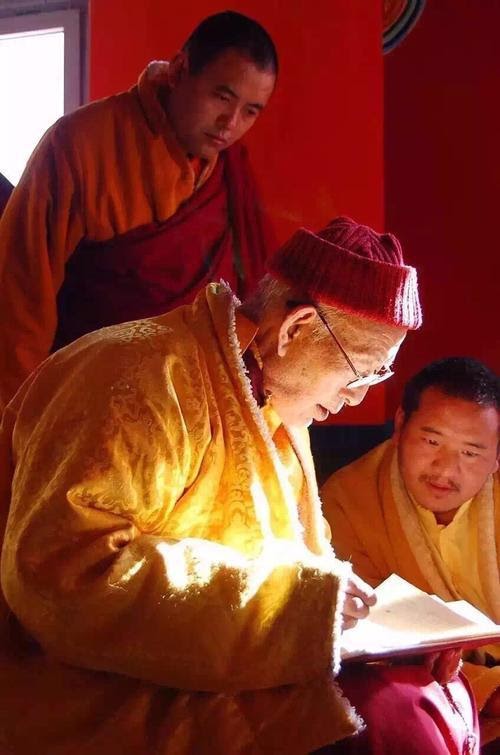 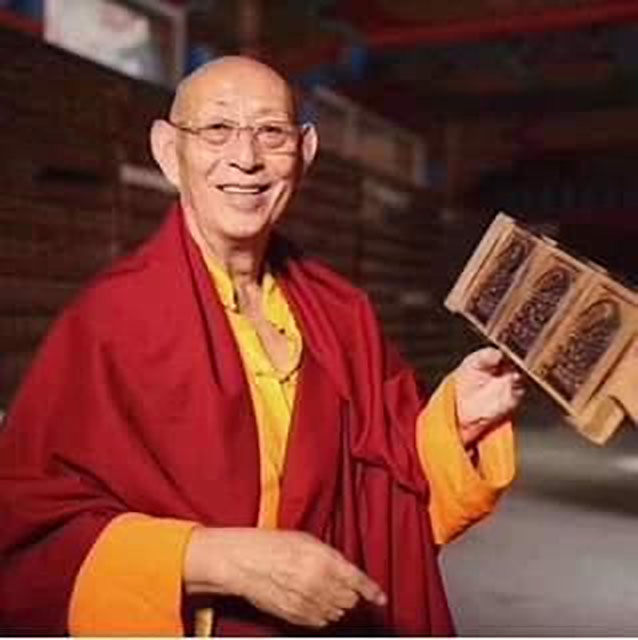 After having offered his lifetime service wholeheartedly to preserve the Palyul Nyingma lineage and having presided over the enthronement of HH Karma Kuchen Rinpoche in 2000 and the enthronement of HH Migyur Dechen Garwang Zilnon Dorji Rinpoche (Penor Rinpoche’s yangsi reincarnation) in 2014, HH Tulku Thubsang Rinpoche passed into mahaparinirvana on the 10th of January, 2021 at his residence in Chengdu, China. He remained for three days in thugdam (samadhi meditative process of inner dissolution of the five elements and consciousness back into the Primordial Light). 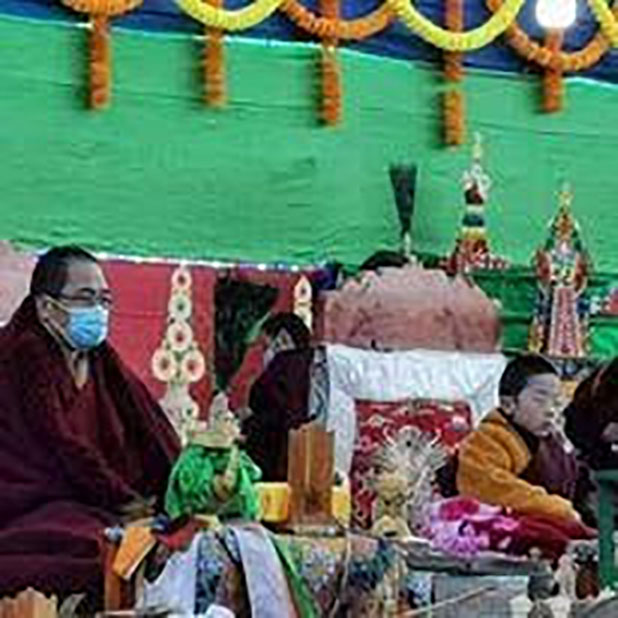 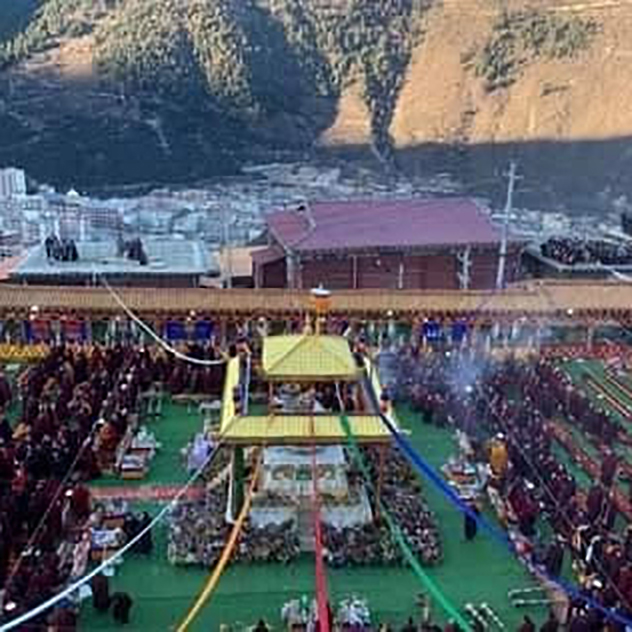 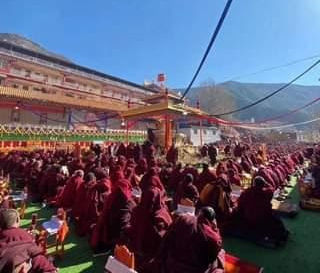 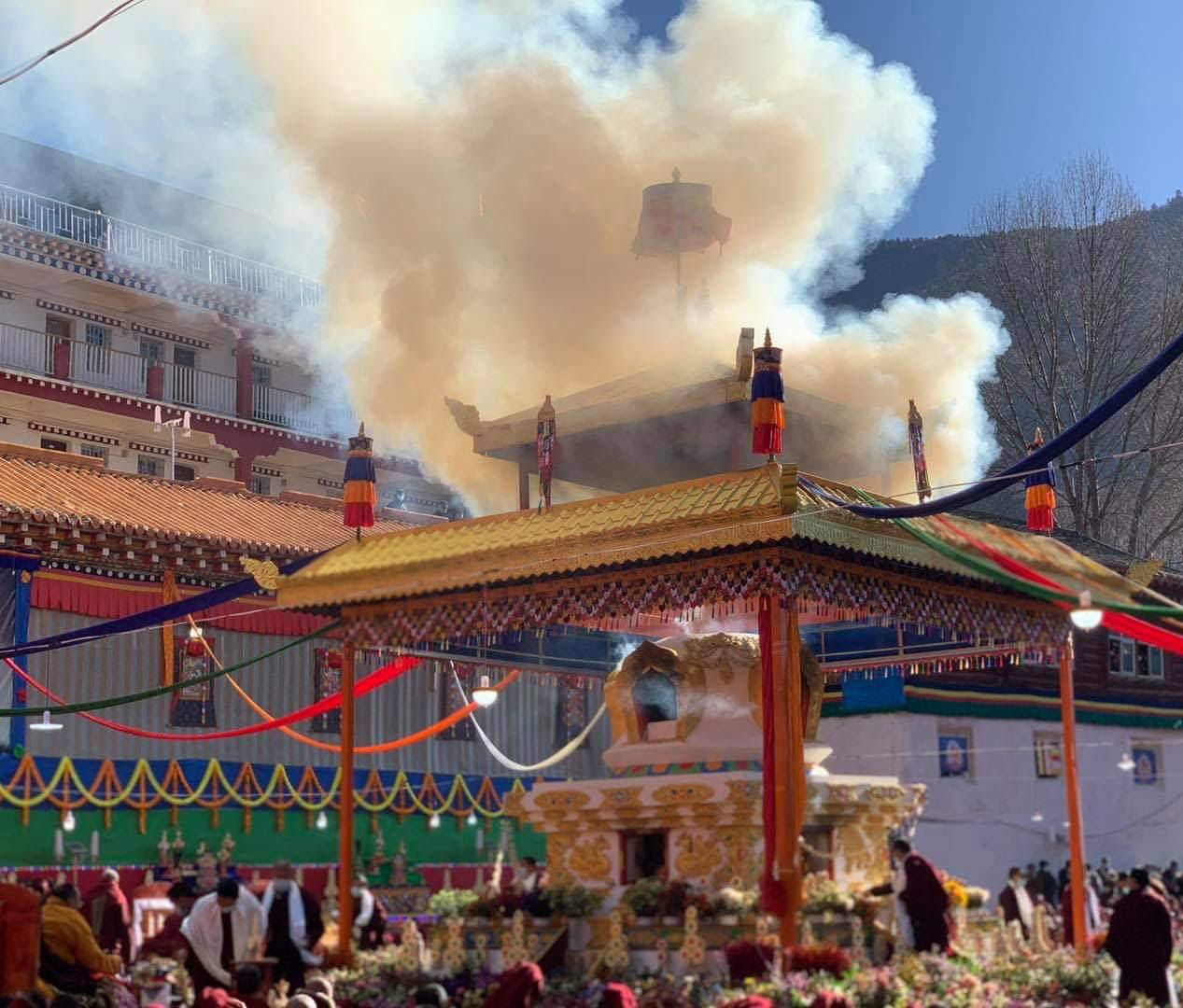 The kudung of His Holiness Thubten Palzang Rinpoche was cremated on the 3rd of February 2021 at Palyul Namgyal Jangchub Choling Monastery. The pujas on the cremation day were presided by HH Karma Kuchen Rinpoche and HH Migyur Dechen Garwang Zilnon Dorji Rinpoche; HH Namkhai Nyingpo Rinpoche of Yachen; HH Garwang Nyima Rinpoche of Dharthang; Tulku Jamyang Rinpoche of Kathog; Khang-Nang Tulku of Palyul. Five different  pujas were performed simultaneously facing the kudung with Vajrasattva in the east; Palchen Duepa in the south; Aksobhya in the west; Purifying the Lower Realms through Peaceful and Wrathful Deities in the north; and Fire Puja of Sublime Siddhi in the middle. 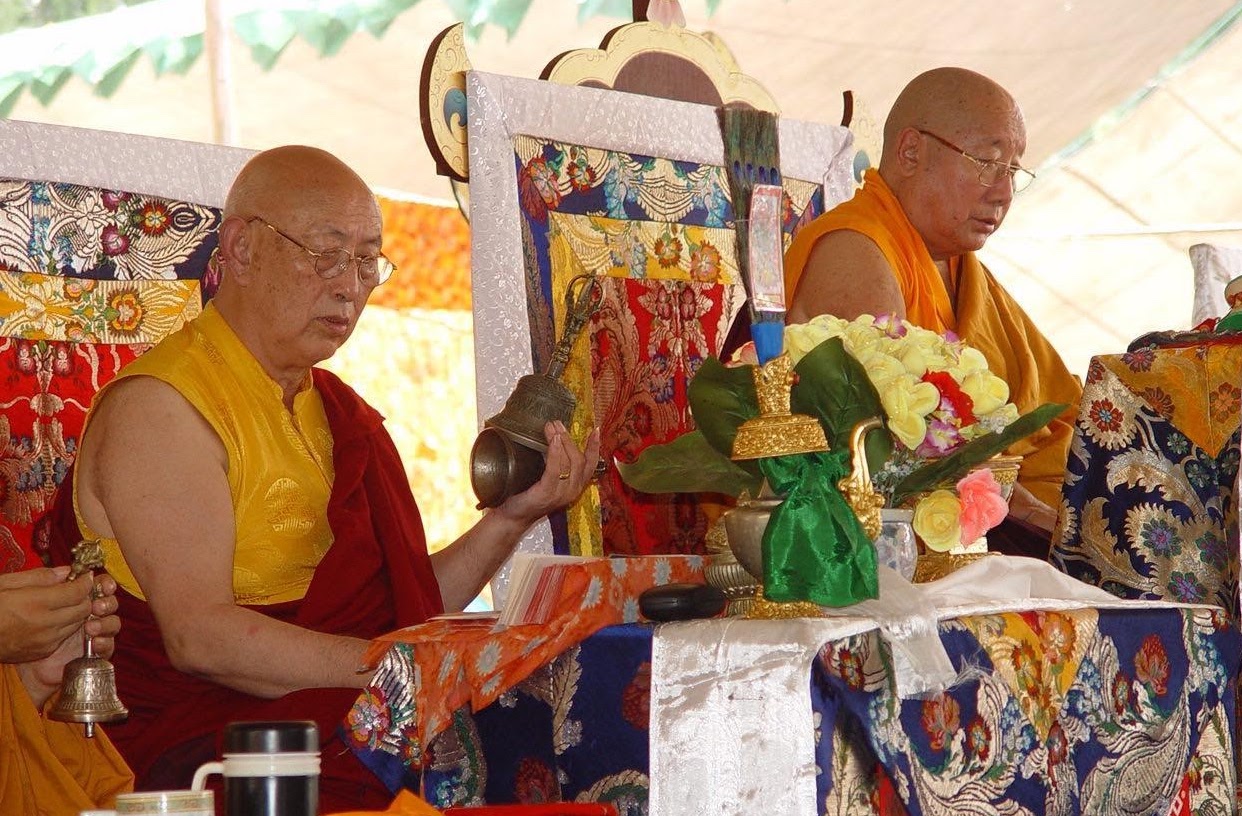 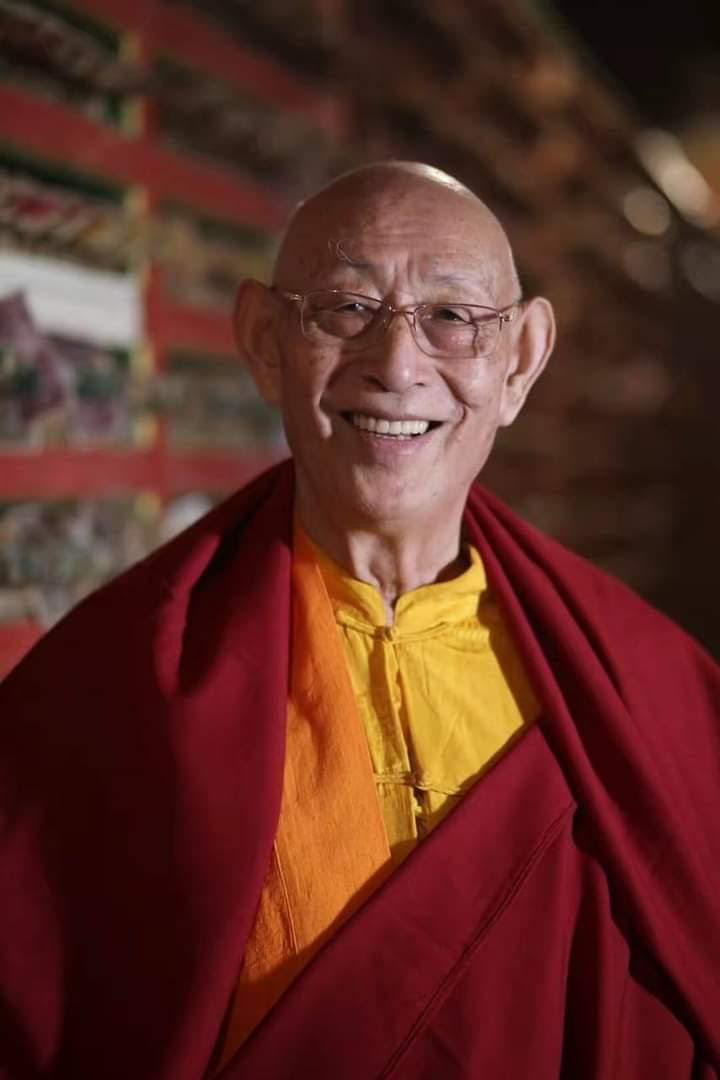 HH Drubwang Pema Norbu Rinpoche had once spoken of HH Thubten Palzang Rinpoche that the accomplishments they both attained were one of the same without any difference. A living lantern of pure view free from the stain of partiality, His Holiness Thubten Palzang Rinpoche’s activities were like a great ocean of enlightened compassion for the benefit of the Buddhadharma and sentient beings that will continue to inspire generations of devotees for years to come.