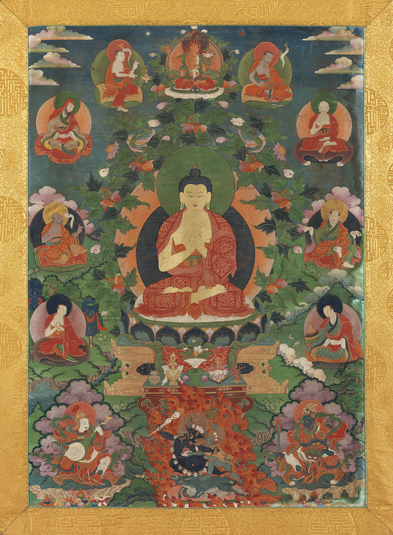 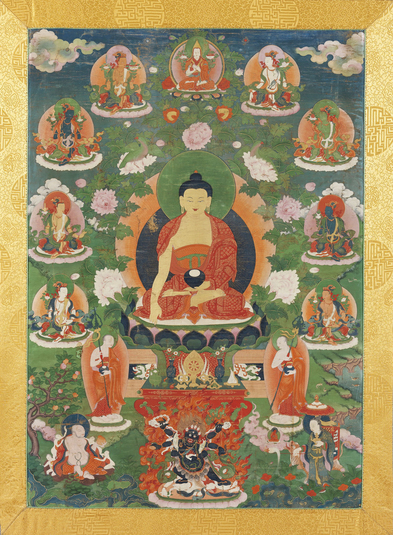 Buddhavacana, Word of the Buddha (ka) is the complete life-time oral transmission of Shakyamuni Buddha (Sangyé Shakya Thubpa) as recited by his personal attendant Ananda (Küngawo) one year after the parinirvana of the Buddha, at the first assembly of the Rajagriha Council - a gathering of five hundred arhats (drachompa) headed by Mahakashyapa (Ösung Chenpo) for the purpose to preserve the teachings intact. Each recital would begin by saying: Thus have I heard (diké dak gi töpa dü chik na) - these are the words as spoken by Lord Buddha. The recitals are divided into Vinaya (dulwa), Sutra (do), and Abhidharma (chö ngönpa), collectively known as Tripiṭaka (denö sum) the three baskets. Together these collections of teachings provide the path of superior cultivation that lead to the attaining of liberation (tharpa), realisation (changchup) and omniscience (namkhyen).

Sutra is the collection of the Buddha’s testaments on how to cultivate immovable faith (yiché pé dépa) and samadhi meditation (tingédzin) in accordance to the absolute truth (döndam denpa) as spoken by the Buddha in response to the questions and requests of the devotees.

Abhidharma presents the complete classification of all the topics in the sutra from the point of prajnaparamita (sherab kyi pharol tu chinpa), the transcendental wisdom of directly realising the non-conceptual oneness of all phenomena that leads one to the original nature of jnana (yeshe), the uncontrived primordial wisdom of non-abiding nirvana (mi nepé nyangdé) which manifests as the three enlightened bodies of the Buddhas - Dharmakaya (chö ku) the Truth Body; Sambhogakaya (longku) the Enjoyment Body; and Nirmanakaya (tulku) the Emanation Body.

Abhidharma offers a comprehensive description of the universe and its infinite number of worlds. Each world has at its centre a Mount Meru (ri rab) and four continents (ling shyi). One thousands of such worlds amount to a thousandfold cosmic world order. A thousand of these constitute a two-thousandfold cosmic world order. Another thousand of these two-thousandfold cosmic world orders become a trichiliocosm (tongsum kyi jikten kham) - a universe composed of a billion saha worlds (mi jé jik ten) presided over by one Buddha who takes birth into the world to perform the twelve deeds (dzepa chunyi) of a supreme nirmanakaya (chokki tulku) as demonstrated by Shakyamuni Buddha - the fourth of the one thousand Buddhas that would appear in this present great kalpa (kalchen) of the Fortunate Aeon (kalpa zangpo'i). A great kalpa is the intervening time between the creation and re-creation of a universe, which passes through the four stages of - formation (chakpai kalpa), duration (nepai kalpa), destruction (chikpai kalpa), and emptiness (tongpai kalpa).

Ninety-one great kalpas before the present aeon, Sumedha, a young Brahmin from Dipavati went to the mountains to become an ascetic under the guidance of a rishi (trangsong), a teacher of the Vedas, to pursue the ancient studies on how to cultivate the upright conduct of a sage, the art of longevity and the mystical supra-mundane cognition (ngönshé) in working with the elements of nature. Aspiring to attain a state beyond death, he renounced all attachment to worldly concern and devoted himself unreservedly to his practice. With the quiet resolve of single pointed focus, he became an adept of the Rigveda (ngéjö kyi rikché) on the Vedic hymns of praise; the Samaveda (chöjin kyi rikché) on the Vedic verses of song; the Yajurveda (nyentsik ki rikché) on the chanting of mantra at rituals; and the Atharvaveda (si sung ki rikché) on all aspects of knowledge for everyday life.

Having perfected his Vedic practice, Sumedha was advised by his teacher that it was time for him to offer his service to the world. Thus encouraged, Sumedha bid farewell to his teacher and departed from the mountains. On his journey through a country nearby, he came upon five hundred Brahmins gathered together for an open session of question and answer on Vedic practices. A reward of five hundred silver coins and a young maiden for marriage would be proffered to anyone who could offer the best elucidation of the day. Sumedha observed that the scope of their verbal exchanges were limited to the mundane topics of avoiding the suffering of future rebirth in the lower realms and gaining happy rebirth as human or as god instead of attaining a state beyond death and samsara (khorwa).

Sumedha enquired if he would be permitted to participate since he too was a descendant of the Brahmin. With their consent, Sumedha seated upon the podium and started to illuminate the queries put forth from the assembly. His discourse was so profound and comprehensive that all the Brahmins agreed Sumedha was more than qualified to teach them. They were happy to award five hundred silver coins to Sumedha but had qualms about offering the young maiden to him for marriage since Sumedha was not a native of their land and the wedlock of natives from two different countries was perceived as inappropriate in their eyes. They decided to offer more money in lieu of the maiden. But Sumedha declined to accept their gesture of award and explained to them that the truly learned relied on the accomplishing of virtue as their source of support. His quest in life was to follow a path of virtue free from worldly attachment so that the precious heritage of the sage and the deity could be propagated and bequeathed to the world. Using material award as a means to promote learning would only obstruct the true path of virtue, destroy its root of authenticity and bestow nothing of true value to the future generations. On hearing this, the Brahmins all felt embarrassed and ashamed.

Sumitta the young maiden who had witnessed the entire proceeding was so taken aback by the nobility of Sumedha that she perceived him as a man worthy of becoming her husband. By the time she had gathered her belongings together with the intention to follow Sumedha, he had already long gone. Sumitta quickly set off in pursuit hoping to catch up with him but the young Brahmin was nowhere to be found. Days later when she reached the outskirts of Dipavati, the capital city of Dipamakara, she had accumulated blisters on her feet and weariness had taken a heavy toll on her. As she rested by the side of the road, her pitiful state was spotted by King Arcimat who was on an excursion outside the city. He approached her to enquire her place of origin and how did she end up in his country. Sumitta explained to the king the chain of events that led her there. King Arcimat was touched by her resolve and invite her to return with him to live in the palace as his adopted daughter. Sumitta said she was agreeable to the proposal on the condition she could offer her service in kind. The King suggested she could collect fresh flowers for the daily decoration of the palace. Now they had reached mutual accord, Sumitta accompanied King Arcimat back to the capital.

Sumedha was also on his way to Dipavati for he heard Dipankara Buddha was due to visit his home city. As he approached the capital, he chanced upon Sumitta on her daily round of collecting fresh flowers for the palace. In her hand were seven blue lotus flowers which looked so exquisite that Sumedha wished to offer them to the Buddha and asked Sumitta would she consider sharing the lotus flowers with him. Sumitta was overjoyed in finally meeting up with Sumedha and readily gave him five stems of lotus. 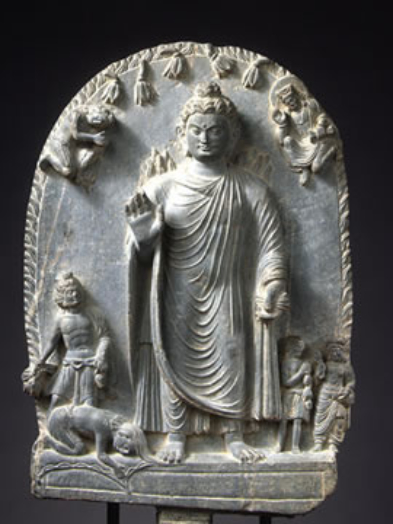 In preparating for the Buddha’s visit, the citizens of Dipavati led by Queen Sudipa, were busy decorating the city and reconstructing the road outside the city so that the Buddha and his retinue could tread on it without discomfort. Sumedha approached them and offered his service to help. He was given a section of muddy path that needed to be paved over by stones. While he had the mystical ability to use supra-mundane cognition to complete the work quickly, he chose to use his own physical labour to honour the visit of the Buddha. But before he could complete his task, the Tathagata and his retinue had already come within several feet of him. To prevent the feet of the Buddha from getting soiled by the incomplete path which was partially muddy, Sumedha prostrated before the World-Honoured One using his body and his cloak to form a human causeway for the Buddha to walk over while he threw the offering of the blue lotus flowers towards the Buddha. To everyone's surprise, all five lotus flowers remained suspended in mid-air as if they were planted there.

Sanctified by the compassionate ambience of the Buddha, Sumedha fortified his mind with firm resolution that he too would attain Buddhahood for the sake of all sentient beings. Dipankara Buddha stood before Sumedha and proclaimed: “This young Brahmin shall after the passing of ninety-one great kalpas attain the fruition of Buddhahood. You shall be known as Shakyamuni Buddha. You shall born with the thirty-two major persona and eighty minor signs of pure activities, with light from your body reaching the span of one arm length. You shall become a Tathagata of a Sahalokadhatu (mijé jikten), a reckless Saha world that will require a great store of patience and forbearance to subdue, for the sentient beings there harbour no fear for the negative consequence of grasping, anger and ignorance. You shall be the timely shower of blessings that would liberate countless sentient beings. You shall born in Kapilavastu, a royal descent of the Gautama lineage. Your father’s name Suddhodana; your mother’s name Maya; your wife’s name Yashodhara; your son’s name Rahula; your principal attendant’s name Ananda”.

Upon receiving the prophecy of his future Buddhahood, Sumedha used his ability of supra-mundane cognition by leaping fifty-six feet into the air, then descended with his long hair spread out to cover the muddy surface of the road for the feet of Buddha to walk on. Having stepped over this human causeway, Buddha turned around and announced: “None of you shall step upon the ground that had been covered by the hair of a future Buddha for this ground had been sanctified for all eternity”.

Buddha Shakyamuni concluded the story by saying to Shariputra: “At that time, I was Sumedha and Yashodhara was Sumitta”.

This teaching entitled ‘Dipankara Buddha’s Prophecy of Shakyamuni Buddha’s Enlightenment’ is presented here by Tenzin Gyalpo Drakpa Gyaltsen Dondrup Dorje as his homage to all the Buddhas of the three times in ten directions.