The Twelve Great Deeds of The Buddha 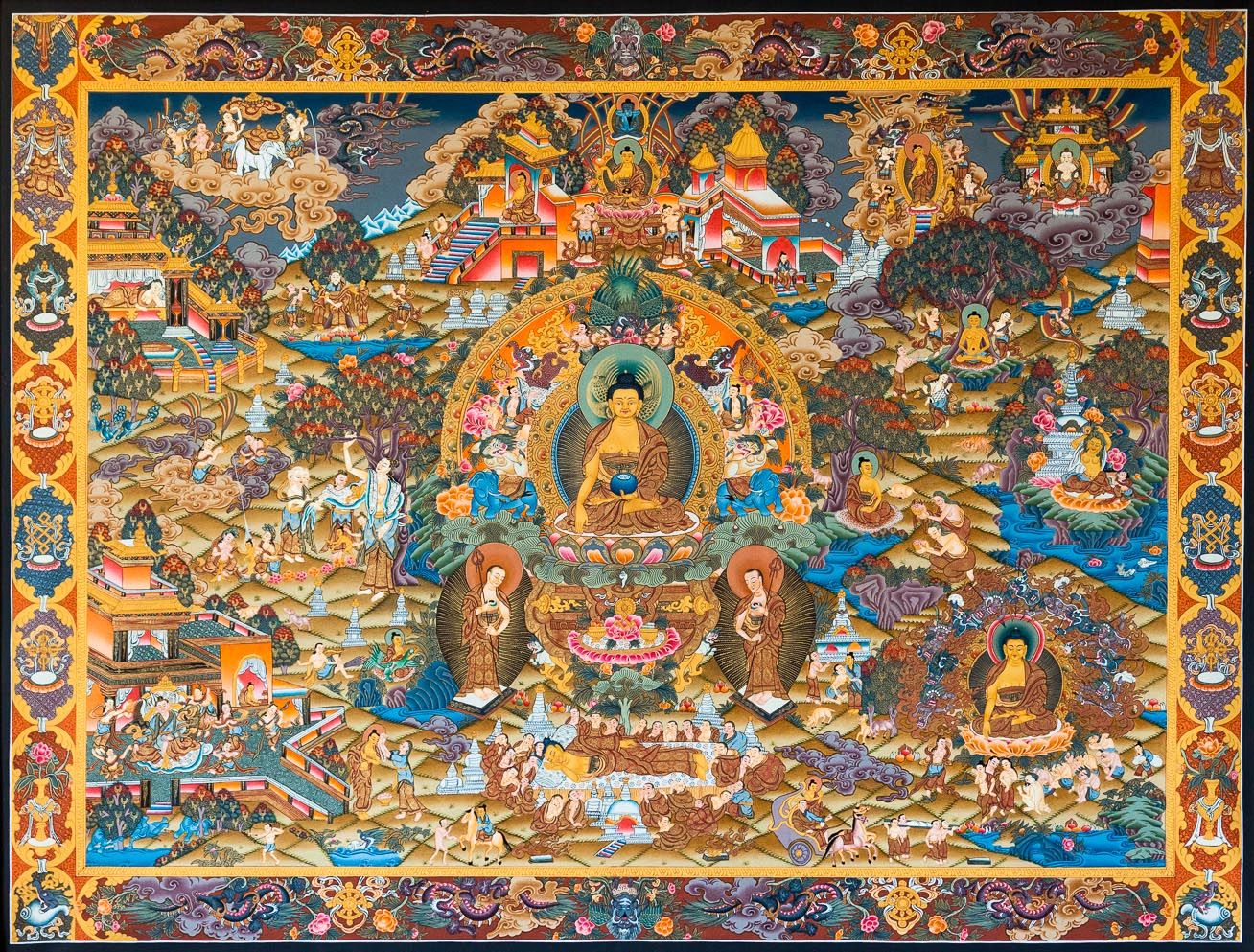 Each Buddha would emanate himself concurrently in the form of a supreme nirmanakaya (chokki tulku) in each of the billion saha worlds (mije jikten) in the southern continent of the Jambudvipa (Dzambuling) to perform the twelve great deeds (dzepa chunyi) of a Tathagata.

Praise to Buddha (Thup Töed), a prayer which pays homage to these twelve great deeds was recited by His Holiness Penor Rinpoche and other High Lamas inside the Mahabodhi Temple each morning during the annual Nyingma Monlam Chenpo in Bodhgaya, India. It is also a prayer used by Pathgate students in their daily practice. Brief description of the twelve great deeds are as follow:

The buddha-to-be gave his last teaching to the countless bodhisattvas in the inner sanctum of Tushita Heaven (ganden) the Joyous pure realm; enthroned his successor Maitreya to be the next Buddha; then descended to Jambudvipa.

In the form of a white elephant with six tusks, the bodhisattva mahasattva entered the womb of Queen Mayadevi (gyutrul ma), the one and only designated mother of all the Buddhas who would appear during the Fortunate Aeon.

At the tenth month of pregnancy, Queen Mayadevi started her journey   to her parents’ home to give birth. When the queen and her entourage arrived at Lumbini grove, Queen Mayadevi decided to take a stroll in the garden. Almost immediately, she became aware the birth of her child was about to happen. She stood beneath a fig tree and steadied herself by holding onto the overhanging branch. The bodhisattva mahasattva emerged effortlessly from the right side of her body to the welcome offered by Indra (wangpo) the Lord of the Thirty-Three Heaven (sumchu tsasum), and Brahma (tsangpa) Lord of the Pure Form Heaven (tsangri), who wrapped the new born in divine silk and placed him upon a large lotus where he stood without support.

Countless naga kings (lü gyalpo), appeared in the sky overhead and down flowed two streams of water, one cool and one warm to gently rinse the body of the buddha-to-be who surveyed the four directions before he took seven steps in each which signified the unfathomable great store of merits and wisdom he had accumulated from infinite aeons of practices in loving-kindness (jampa), compassion (nyingjé), altruistic joy (gawa) and equanimity (tangnyom) - the four immeasurables (tsémé shyi).

On every step he placed his foot, a lotus sprouted from the ground. With his right forefinger pointed to the sky and his left to the ground, he announced in a clear voice: “Between heaven and earth, l am the most supreme for this is my last birth”.

King Suddhodana (Gyalpo Zetsang Ma) named the new born Siddhartha (Dondrup) which means he who is efficaciously accomplished to fulfill the destiny of his choice.

4. Becoming skilful in all arts and disciplines (zoyi néla khepa)

From a young age, Siddhartha displayed the prowess of a lion among men, mastered an extensive range of worldly disciplines unmatched by any Sakya youth and surpassed even his teachers. His athletic skill was unrivalled at the games held in Aṅga and Magadha.

To abide by the worldly convention of the time, Siddhartha age sixteen, at the behest of his father, married Princess Yashodhara (Trak Dzinma) and took charge of the kingdom at age twenty-nine. He lived a life of princely pleasure in the palace of  Kapilavastu, surrounded by a retinue of young beautiful consorts and courtiers sent by his father King Suddhodana, yet skilfully avoided committing even the slightest transgression. 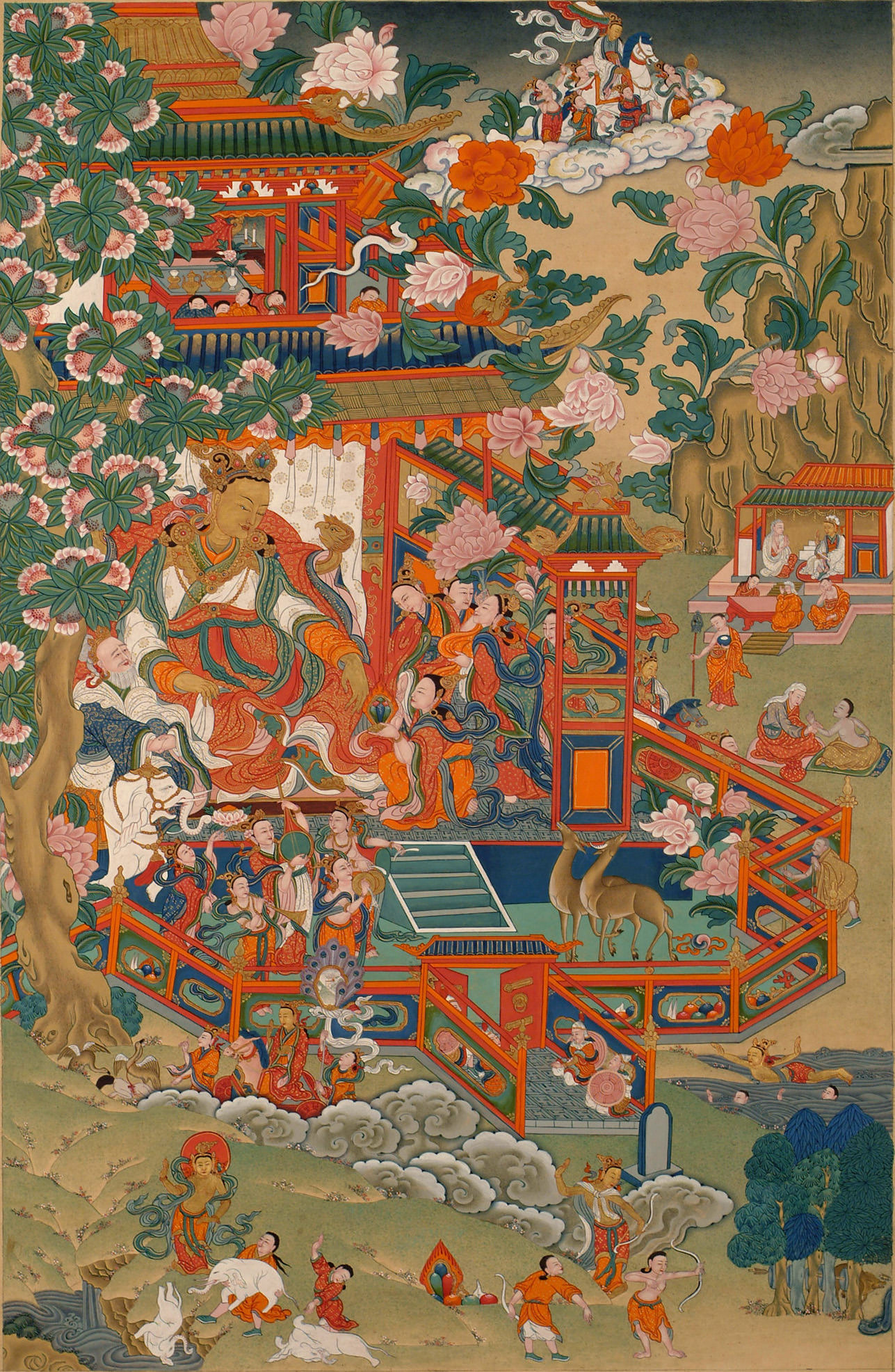 Siddhartha made four separate excursions outside the palace, each time towards one of the four cardinal directions. The first time he saw an old man. The second time a sick man. The third time a corpse and the fourth time an ascetic. Recognising the first three encounters as the inevitable sufferings of ordinary life and the fourth as the path that could uncover the solution to resolve this conundrum, he renounced family life, left his father kingdom in the middle of the night and cut off his own hair before the Visuddha Stupa.

For six years, Siddhartha led a life of physical penance by the banks of the Nairanjana river in the company of five other ascetics who were all members of the royal family sent by his father. He then realised the most supreme transcendental wisdom could not be attained by practice of austerity nor by indulgence in excess. Henceforth he discarded the two extremes and advocated madhyama (uma) the middle way as the path to liberation (tharpa).

Siddhartha went to Bodhgaya, seated upon a pile of kusha grass, assumed the immovable vajra posture and entered into the meditative state of samadhi (tingédzin) in the quest for enlightenment just as all the previous Buddhas had done so at this exact spot, the axis mundi - the cosmic point of connection between heaven and earth by which energy can transit and disseminate between the higher and the lower realms.

Mara Papiyan, Lord of Illusion, the karmic personification of death, rebirth and desire, and leader of the maras, became disconcerted by the imminent awakening of Siddhartha. He tried to disrupt the bodhisattva mahasattva from his pursuit by deploying his three daughters Tanha (sepa: craving), Arati (kong tro: discontentment), Raga (döchak: grasping) in their most alluring seductive form to distract Siddhartha but to no effect.

Mara Papiyan then appeared in the form of the universal monarch Chakravartin (khorlö gyurwé gyalpo) mounted atop his elephant Girimekhals, accompanied by an army of demons, launched wave after wave of assaults on Siddhartha. First came the frontal onslaught of whirlwind but the bodhisattva mahasattva remained unshaken. Next came a heavy rainstorm with intent to drown Siddhartha, but not a single rain drop fell on his body. This was followed by showers of rocks, showers of arrows, which all turned into celestial flowers from heaven.

Mara Papiyan then demanded Siddhartha to yield the vajra seat to him for the vajrasana (dorjeden) should not be seated upon by a mortal. Siddhartha’s right hand reached down and touched the ground to summon the great earth to come forth as his witness. The earth trembled six times, Mae Thorani, the earth-mother appeared and affirmed the bodhisattva mahasattva’s sacred right to the vajrasana. As she wrung her long hair, torrent of water emerged from aeons of merits accumulated by the bodhisattva mahasattva, cascaded down to the ground and created a deluge of virtue which swept away the demon army. Mara was utterly defeated and fled.

At age thirty-five, on the fifteen day of the fourth month, as the night progressed to the third watch, the bodhisattva mahasattva remained in a state of supreme samadhi, witnessed the simultaneous replay of all his previous lives and the constant rebirths of endless living beings in the past ninety-one aeons and before. He was fully awaken to the true nature of reality and the eighty-four thousands skilful means he could employ to liberate sentient beings from the bondage of samsara (khorwa). As the morning stars appeared in the sky, he attained perfect enlightenment. 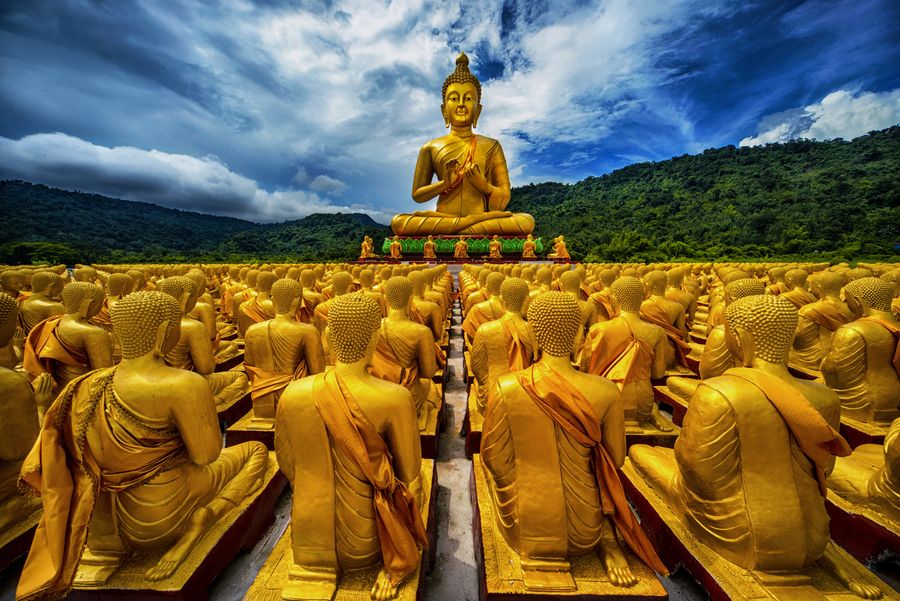 After fully enlightened, Shakyamuni Buddha remained seated under the bodhi tree for the next twenty-one days during which time he gave a comprehensive discourse on the ultimate reality of the universe to countless bodhisattvas who had attained the accomplishment of the first bhumi and above. This teaching known as Avataṃsaka Sutra (do phalpo cha) was given by Shakyamuni Buddha in the emanation of Vairochana (Nampar Nangdzé) and conducted entirely through the meditative state of samadhi.

For the following four weeks, Shakyamuni Buddha remained in silent contemplation until Indra and Brahma beseeched him to fulfill the five hundred original vows he had made over countless aeons to be the guiding light of liberation for sentient beings from samsara, and appealed to the Buddha that it was the time to share his teaching with the living beings of the world. Thus began Buddha’s forty-five years of teaching.

The third turning was given in Vaishali and other locations where Buddha revealed all the various yanas (tekpa) he taught over the years were part of one inter-connected vehicle, and the buddha nature (tezhin shekpai nyingpo) all beings possessed, share the same ground (shyi) of which its essence (ngowo) is the primordial purity of emptiness (tongpa nyi), its nature (rangshyin) the spontaneous present luminosity (lhundrup ösal), and its energy compassion (thukjé), are the only unconditioned absolute oneness of dharmakaya (chö ku), the truth body of the ultimate reality (don dam bden pa) in which no conceptual obscuration or illusion have ever been present.

In his eightieth year, Shakyamuni Buddha and Ananda (Küngawo) his personal attendant went to the Capala Shrine. Buddha revealed the Tathagata has the supreme power to remain throughout the entire duration of an aeon or until the end of it if he so wished. This proposition was repeated three times by the Buddha but failed to elicit a response from Ananda who later confessed before five hundred arhats (drachompa) at the first assembly of the Rajagriha Council that he was unable to make request to ask the Buddha to remain because he was under the spell of Mara Papiyan at the time.

Mara Papiyan then appeared and encouraged the Buddha to surrender his life immediately for nirvana. The World-Honoured One reassured Mara there was no need to get anxious because he would pass away in three months time. The earth trembled upon hearing these words and Ananda was visibly shaken and protested. Buddha replied to Ananda that had he lodged his objection earlier and if he had requested him to stay, he would have remained throughout the aeon or until the end of it.

Three months later, Buddha and an entourage of monks arrived at a grove of sala trees in Kushinagar. Subhadra, a 120-year-old local Brahmin requested the Buddha to grant him permission to join the ordained sangha. He was the last monk ordained by Shakyamuni Buddha. Soon after being ordained, Subhadra settled down at a spot nearby, went into deep meditation, speedily attained arhatship and presently entered parinirvana.

On the 15th day of the fourth month, a couch flanked by two pairs of exceedingly tall sala trees was prepared for the World-Honoured One. Shakyamuni Buddha lied down on his right side in the lion posture with his head pointed to the north, his face to the west, one foot upon the other. The trees burst into bloom out of season and yellow petals showered upon the Tathagata.

Shakyamuni Buddha spoke for the last time to his monks: “All composite matters are subject to decay. Let the truth of suffering galvanise your practice. Let the discipline of Dharma be your guiding master. Strive on always in diligence”.

Buddha then passed into maniparinirvana - the sorrowless sphere of spontaneous accomplishing clear light.

For seven days, homages and offerings were made by men, non-beings, gods and deities from the ten directions. The holy body (kudung) of the Buddha housed in a casket adorned with flowers and incense was placed upon a pyre of scented wood and fragrant oil for the cremation. Several attempts to lit the pyre were unsuccessful. It was then revealed by a disciple who had the supra-mundane cognition (ngönshé) of clairvoyance that this was because Mahakashyapa (Ösung Chenpo) the most senior disciple and his five hundred students were still en route to the ceremony. The moment Mahakashyapa arrived and after he had prostrated before the casket, the pyre instantly burst into flame by itself.

The relics from the cremation were divided into eight parts and were distributed to enshrine eight separate stupas (chöten) representing eight important events in the life of Shakyamuni Buddha.

This concluded a brief description of the twelve great deeds of the Buddha.