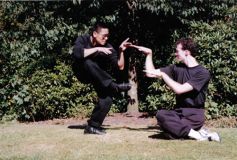 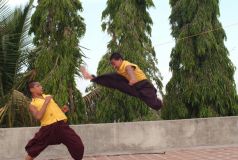 What is Shaolin Gongfu?

A classical form of physical discipline first taught at the Shaolin Monastery in China 1500 years ago by Bodhidharma (Da Mo) - the founder of the Chan (Zen) Buddhism. To the monks of Shaolin Monastery, Da Mo gave instruction on the Buddhist Qigong practice of Yi Jin Jing (Muscle/Tendon Changing Classic) and Xi Sui Jin (Marrow/Brain Washing Classic) to enhance their physical vitality and mental focus in preparing their body and mind for the practice of meditation and other Buddhist studies. These two powerful Energy Yogas were later incorporated into many Shaolin Martial Art Forms such as the Eighteen Lohan Hands and the Five Animal Patterns of Tiger, Crane, Dragon, Snake and Leopard. Many well-known Gongfu Systems of today such as Hung Gar, Choy Lay Fut, Wing Chun, Preying Mantis, Eagle Claw, and Mi Zong Lohan, shared similar lineage of origin that can be traced back to the root source of Shaolin Monastery.