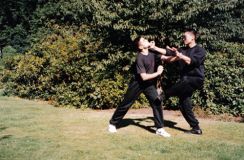 What Is Wing Chun Gongfu?

A form of Chinese self-defence system first taught in China by Ng Mui - a Buddhist Nun from Shaolin Monastery 400 years ago. Renowned as a close range system of self-defence, Wing Chun Gongfu was introduced into Hong Kong in the 1950s by Grandmaster Yip Man whose many students include the late Bruce Lee.

The characteristic of Wing Chun Gongfu lies in its simplicity and its emphasis on utilizing simultaneous deflection and defence to neutralize attacks rather then rely on power and size. Wing Chun Gongfu is also well known for its one-inch punch, which is capable of delivering explosive power at very short distance like the releasing of a spring coil.