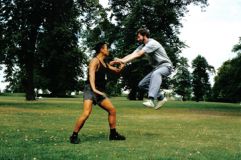 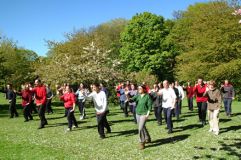 What is Taijiquan / Tai Chi Chuan?

Popularly known as Taiji. It is a trinity of 3 arts - that of Healing, Meditation and Self Defence. Regular practice of Taijiquan promotes the cultivation of soft intrinsic qi flow which is essential to the preservation of one's health. An ideal therapy for poor circulation, high blood pressure, asthma, arthritis and back, neck and joint problems. Its gentle non-jarring movement exercises every muscle, ligament, tendon, joint, lymph node and internal organ of the body.

As a form of moving meditation, Taijiquan encourages one to approach one's practice with a quiet attitude of serene attention as opposed to overtly concentrating one's focus only on part of the composition of the form which tends to create a condition of stress and an illusion of false power. Correctly embraced, Taijiquan stimulates awareness, develops a calm mind which dissolves internal conflicts and tensions to bring forth a state of harmony and emotional balance within oneself.

As a form of self-defence, the non-opposing yielding methods of Taijiquan enable one to control and redirect the attack of an opponent while retaining the option of counter attack if one so chooses. The Taiji Classics refer to this as: using 4 ounces of strength to shift the force of a thousand pounds.