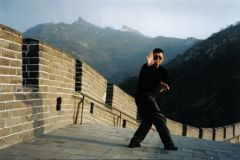 Bagua Zhang composed of 8 Mother Palm Methods which are further expanded into 64 sets of interchangeable techniques. Its circular approach and lightening speed in change of direction resemble the whirlwind properties of a tornado in action. It personifies the essence of dragon body, monkey attitude, tiger squat and the swooping motion of the eagle. Even though Tung Hai-Chuan (1796-1880) was the first Bagua Zhang Master that came into public prominence a mere hundred years ago, latest research in China suggests this Taoist martial art system has been in existence for at least 4000 years.