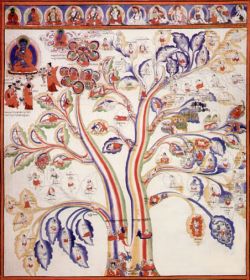 By What Means does Classical Qigong Practice Harmonise Human Energy?

Classical Qigong Practice harmonises human energy by means of first regulating the electromagnetic polarity of the body through a process of balancing the dynamics of yin & yang. The eventual transformation and union of yin & yang gives rise to the formation of wu xing - the five cosmo-physical phases of energy - which are symbolised by the five elements of wood, fire, earth, metal & water. It is principally due to the interaction between the negative and positive polarity of the yin & yang, and the resulting countering and balancing of their associated energies in wu xing, that a mutually transmutable fusion of fundamental force of nature is generated, forever changing and manifesting through the entire human system as hot & cold energies, evil & wholesome winds, yin & yang organs, deficiency & excessiveness, degeneration & growth, etc. Whenever the energy dynamics of yin & yang within the wu xing of the human system is out of balance, evil winds (unwholesome qi) will gain access into the body, afflicting the kidneys which act as the storage of ying qi (nourishing energy) from the viscera and the liver which rules over the well-being of blood circulation. Disorder within the body will then take root and manifest into all manners of psycho-physical illness. Thus the balancing of the human energy system through the attuning of yin & yang and their associated wu xing is the first step in harmonising a dysfunctional state in human energy.