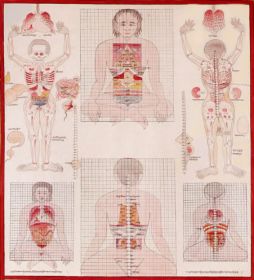 How does the Interaction of Yin & Yang and the Theory of Wu Xing affect the Constitution of Man?

The theory of wu xing divides the year into five seasons of spring, summer, autumn, winter and long summer. Each of the seasons is related with a specific viscera and their seasonal changes are manifested in the associated organ. The interaction of these energies - each by nature being windy, hot, damp, dry or cold - can at once be mutually beneficial or mutually disruptive, thus giving rise to the culmination of either good health or psycho-physical disorders. The dynamics of yin & yang may appear to be opposite, but in actuality, they are interdependently unified. The ebb and flow of changes in yin & yang in relation to wu xing correspond to the changes of well-being in the body and give rise to different associated emotions. For example: excessive anger causes harm to the yin qi matrix of the liver while excessive joy is detrimental to the yang qi matrix of the heart. The preservation of health is thus an impossible goal until the interactive dynamics of yin & yang in relation to wu xing are properly regulated and harmonised. Furthermore, yin at its most abundant will transform into yang, and yang likewise at its most abundant will turn into yin. Yin & yang, with the heaven (yang) above, the earth (yin) underneath, and the myriad phenomena (yin & yang) existing in between, interactively complement each other, manifesting into infinite variables such as blood & qi, male & female, water & fire, soft & hard, dark & light and so forth.

The existence of every form of phenomena in the material realm has its origin in the interaction of yin & yang . When yin is active within, it is defended by yang without; when yang is active without, it is motivated by yin within . The task of Qigong Practice is to harmonise the interaction of yin & yang in order to avoid the occurrences of deficiency or excess. Its other task is to regulate the flow of ying qi (nourishing energy) which is vital to the consolidation of a healthy state of qi xue (chi-blood), for while blood nourishes qi, it is qi which directs the flow of blood. Thus, when the flow of ying qi (nourishing energy) is bountiful, there will be harmony in yin & yang and physical well-being can be assured.