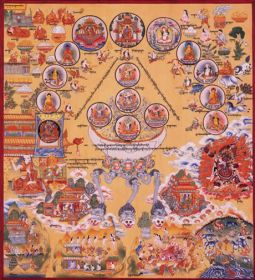 How many types of Human Energy are there?

There are three main types of human energy. The first type: xian tian qi (pre-natal energy), also known as yuan qi (original qi) is derived from ching (primordial essence) which is yin by nature. It is yuan qi which we inherited from the moment we were formed as an embryo. It composes of not merely the vital plasma, DNA, and jing of our parents, but also the mental continuum of our mind-stream within which the potential of all the karmic actions we have ever committed since the time immemorial are stored. The amount of yuan qi for each human life span is pre-determined before birth and cannot be replenished once depleted. The moment yuan qi is exhausted, the body will cease functioning and death will follow.

The second type: hou tian qi (post-natal energy) is yang by nature. We assimilate this energy from food, air and activities which we deem as essential to our health and fitness. The type of energy which we require to manage the functioning of the body is in actuality a fusion of xian tian qi and hou tian qi - a blending of water qi & fire qi which give rise to ying qi (nourishing energy) and wei qi (protective energy). The function of ying qi is to co-ordinate the effort of zang qi (viscera energy), jing qi (meridian energy), and zong qi (air-fusion based energy) as it travels within blood vessels and energy meridians, from which it provides fuel for the body while directing the operation of the psycho-physical system through interaction with the energies of wu xing. Wei qi on the other hand regulates body temperature and perspiration as it manifests along the surface of blood vessels, energy meridians, and every organ and body part to provide an energy shield of protection against any debilitating effect it may be subjected to from external influences.

The third type: ling qi (supramundane essence), also known as ling shen (supramundane spirit) is the subtlest of all human energies. The cultivation of ling qi should only ever commence after the amalgamation of xian tian qi and hou tian qi has been suitably refined and converted into shen (primordial essence). When all the dan tiens - energy centres which store and generate qi in the body - are suitably activated whereby the primordial essence (water qi) from the lower dan tien links up with the temporal energy (fire qi) at the middle dan tien to energise the spirit (shen) at the upper dan tien to produce an energy of pure radiance, a process known as ‘three flowers congregating at the apex’ will eventually occur, leading to the energisation of the mystical pass - a point of being at which the duality of thought ceases to matter, the influences of the material realm dissipate, and the cognition of the ultimate truth begins to emerge.

The attainment of this pure, ultra subtlest ling qi - often referred to as an embryo of the supramundane path - heralds the commencement of the higher practice of True Awakening which includes the developing of skill in thought transference which conveys one’s consciousness beyond the limitation of time, space and matter, even beyond the degeneration of body at death.