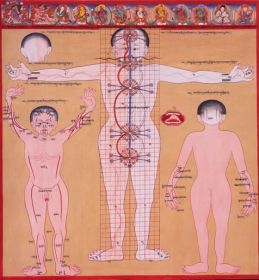 How does Qi travel within the Human Body?

Qi travels within the human body via an energy grid of eight mai (qi vessel), twelve jing (qi meridian), and a complex network of luo (minor qi capillaries). The principal role of the eight mai is to serve as qi reservoirs for the entire body and to maintain a consistent supply of qi flow to all the organs, extremities and body parts through the twelve branches of jing. From these twelve jing - each of which is associated with a specific organ - millions of luo branch out to carry qi flow to the skin, to the marrow, as well as conveying qi interaction between the organs. Located along this energy network of jing, mai, and luo are hundreds of xue (energy points) which serve as qi transformers and relay terminals for qi flow within the body. Each xue when activated, amplifies a specific qi vibration which produces a specific effect on a related body part and organ. The research and understanding into the function and inter-dependent dynamics of jing, mai, luo, & xue form the foundation of the practice of acupuncture, moxibustion and tui na (qi massage).