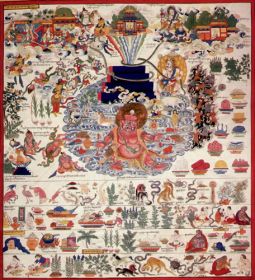 How can Qi be disruptive to Health and Harmony?

The well-being of the physical body relies upon proper circulation of blood & qi, good quality of blood & qi, and harmonious functioning of internal organs . Qi is what gives rise to the forming of life, and when qi circulation is disrupted due to either deficiency, stagnation or mis-guidance, blood circulation will also be affected and poor health will follow. Moreover, one who has amassed a great deal of qi may not necessarily enjoy good health if the purity of the qi has been contaminated by xie qi (noxious energy) which arises from unwholesome transgression in thought, speech & action. Chiefly due to one’s indulgence in such unwholesome transgression, the advantageous potential of positive karma which one may have accumulated over many lifetimes of zealous effort can become dissipated in an instant. This is not dissimilar to a cask of ordinary wine which requires many years of careful storage and skilful handling before maturing into a fine vintage, but needs only a tiny amount of vinegar added to the cask to turn the wine into vinegar.

Tian qi (heavenly qi) which governs the natural cycle of atmospheric changes and ecological dynamics can also be disrupted by xie qi. Tian qi is by nature pure and of primordial brilliance for it internalises the brightness and living virtues of creation. But when the presence of xie qi becomes part of the equation, the natural brightness of tian qi will become temporarily obscured due to the disharmony of yin & yang between the heaven and earth. As a result, patterns of rain-fall and seasonal changes will become affected, thus giving rise to the propagation of ecological disaster. When the natural cycle of seasonal changes and atmospheric conditions have been continuously compromised, and no remedy of any significance is at hand to rectify the causes, all living things between heaven and earth will inevitably wither and become extinct.

Not dissimilar to the beneficial influence of the sun on thriving life, the function of yang qi in the human body is to rise and to radiate outwards in order to support and to protect the body. The ecological dynamics dictate that an excess or deficiency of sun-light can effect catastrophic consequences. In the human energy system, the irregular circulation of yang qi in the body can as easily bring on a state of premature demise. Good health thus requires the constant balancing of yin qi & yang qi. One who suffers from an excess of yang qi will perspire profusely, gasp noisily when distressed, and act in a hyperactive manner - all the symptoms of an overheated energy system. One who conducts an undisciplined life style of excess indulgence will interfere with yang qi circulation leading to gradual depletion of yang qi followed by break-down of health and death. One who suffers from feebleness of yang qi in the body will have swelling in the limbs which in turn depletes the yang qi even further. One who is suffering from fatigue due to overwork will induce an excess of yang qi in the body causing an exhaustion of ching (primordial essence) leading to the stagnation of qi flow and blood circulation, causing dizziness, stroke, and general deterioration in the normal function of the sensory and autonomous nervous systems.

The role of yin & yang in the preservation of health is clearly defined. Yin is to store ching (primordial essence) which gives rise to qi in the body while restraining yang qi, which should be kept dense and rooted, from over-flourishing. Yang is to shield the body from leakage of yin while protecting the exterior of the body. If yang qi is overflowing without being dense and rooted, yin qi, which should be kept gentle and unruffled, will decrease in strength, and the shen (spirit) will end up in disarray. If yin & yang are separated, ching (primordial essence) & qi (energy) will come to extinction. When the union of yin & yang is balanced and in harmony with the external environment, the mind and senses will enjoy clarity, and the three treasures of the body - ching (primordial essence), shen (spirit), qi (energy) - will remain immune from the debilitating influence of xie qi (noxious energy) . Thus, whoever acts in opposition to the Universal Principles of the Single Truth in Nature will open themselves to the harmful effect of xie qi.