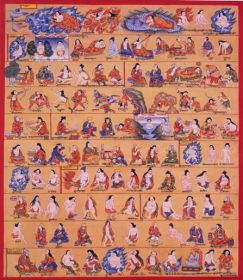 What are the Main Causes of Psycho-Physical Disorders?

All human diseases are caused by disharmony of qi dynamics of which there are four main causes. The first one is the result of temporary imbalance of yin qi & yang qi due to improper diet, seasonal changes, and personal behaviour. This type of minor ailment can often rectify itself without the need for medical treatment as soon as the source of the problem is removed and the balancing of yin qi & yang qi is restored.

The second one is caused by a severe imbalance of yin & yang due to meagre diet, perturbing environmental factors, disturbing psychological disposition, destructive behaviour and pathological disorder. This type of ailment, if promptly treated, can still be rectified by a program of medicine and behavioural regimen. If left untreated, the patient’s condition will get worse leading to the feasible outcome of premature demise.

The third one is known as zou huo ru mo (stepping into the fire and entering the demon). This is a condition which comes into being because of the presence of unwholesome entities in the body. Zou huo ru mo can be brought on by four causes: a complete or partial divorce of yin & yang in the body energy system which gives rise to a confused state of mental faculties; courting of demonic spirits through occult practices which take possession of the practitioner’s senses; improper Dharma practices due to either having been misled by an unqualified teacher or due to ignoring the guidance from a qualified guru; and lastly, improper Qigong practices which subject the body to the encroachment of xie qi (noxious energy). Zou huo ru mo is the main cause of psychiatric illness and insanity. It defies the conventional approach of regular medicine and can only be dealt with through what amounts to an ‘exorcism’ by an accomplished spiritual teacher of the supramundane path or through the invocation extended by a Qigong master who is an adept of the higher vehicle of Cosmic Qigong practice.

The fourth one is known as karmic disease. It is caused by the ripening of negative karmic action one has accumulated in past lives and has since matured into being in the present time. Examples of negative karmic action include: killing or harming of living beings, taking what is not given, misuse of senses, lying, slandering, divisive speech, frivolous talk, craving, ill-will and ignorance of reality. Karmic disease can also be caused by one’s negative action at an earlier period in this life, particularly if it involves the partaking of the five hellish deeds which have been known to activate immediate results upon the transgressor. The five hellish deeds are: patricide, matricide, action of ill-will towards a practitioner of the supramundane path, action of ill-will towards a nirmanakaya being (the earthly body of the enlightened ones) and an attempt to bring about a division within a spiritual community. The causes of karmic disease are entirely spiritual and cannot be cured by conventional medicine. Its progress can only be restrained temporarily by the intervention of grace extended by an accomplished Dharma teacher who has the necessary store of merit and subtle energy field to do so. Ultimately the actual purification of karmic disease has to be carried out by the original transgressor through partaking in a course of remedy composed of Dharma practices under the guidance of an accomplished guru. For it is by oneself one is defiled, and only by oneself is one purified.