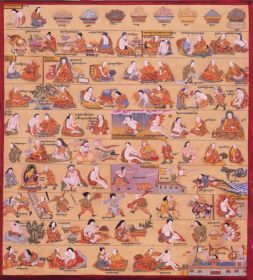 What is the Relationship between Food and the Well-Being of Qi?

Food provides the essential fuel with which hou tian qi (post-natal energy) is cultivated. Hou tian qi, which derives its energy from the digestion of food, has to be blended in a fusion with shian tian qi (pre-natal energy) before ying qi (nourishing energy) and wei qi (protective energy), which together manage the functioning of the body, can be produced. The type of food best suited for humans should have the pre-dominant property of yin because the body is by nature energetically yang. Food with strong flavour is deemed as pure yin whereas plainer flavour is yang within yin. Food with strong aroma is deemed as pure yang whereas faint aroma is yin within yang. Food which is piquant and sweet with a dispersing effect is yang, whereas those of sour and bitter flavour with purging property is yin. When one consumes food which causes an over-flowing of yang, it will weaken yin and gives rise to hypertension, dizziness, insomnia, pain, quick temper and irritability. At its extreme state, yang heat will turn into cold which causes chill and swelling. Both too much or too little food will give rise to illness. For example: too much sour food produces excessive liver qi which could injure the spleen; too much salty food could weaken the femur, emaciate the muscles and cause depression; too much sweet could also cause depression while unbalancing kidney qi; too much pungent food could slacken the tendons, the pulse and disperse both ching & shen; too much indulgence in fish or animal flesh, which due to their fiery yang property, will generate an excess of internal heat which could deplete ching and give rise to over-heated symptoms such as diarrhoea and hyper-active behaviour; while an impoverished diet could affect the heart and spleen, causing rapid respiration, feverish panting, irregular menstrual cycle, dehydration of body fluid, and weight loss.