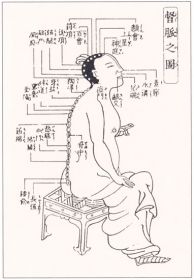 What is the Relationship between Nature and Qi?

The yin & yang dynamics of the human body is in actuality an exact replica of the nature of heaven and earth. The pure yang qi in nature rises up to heaven while the gross yin qi becomes part of the earth. As the di qi (earth qi) vaporises, it rises to form clouds to become part of tian qi (heavenly qi) which, when condensed, falls back to earth as rain. Likewise, the pure yang qi of the human body takes leave from the upper orifices while the gross yin qi such as faeces exits through the lower orifices. The pure yang qi circulates amongst the intestines and the limbs, from which it radiates outward; whereas gross yin qi flows inwards and circulates amongst the yin organs. The release of yang qi during perspiration is similar to the function of rain fall which is nature’s way of regulating the temperature of the earth. The yang qi of the body is no different to that of a strong wind which is constantly moving, while qi associated with uncouth temper is like a display of heavenly thunder. Whenever qi circulation moves in counter direction, it will dissipate swiftly from the body as if being dehydrated by the sun. The human organs are closely linked with the yin & yang aspects of nature with the liver, heart, spleen, lungs, kidneys and pericardium being perceived as yin organs, while the gallbladder, small intestine, stomach, large intestine, bladder and sanjiao (triple burner) are looked upon as yang organs. The function of the sanjiao is to transform air and food to post-natal qi which produce heat like a burner. It is also part of the transit system which conveys nutritive material to different parts of the body as well eliminating the waste. Since qi with overtly yang property will speed up the degenerative process of organs while qi with overtly yin property will lead to their malfunction, the first objective of Qigong practice is to direct the pre-natal qi (water qi) from the lower dan tien to form a fusion with the post-natal qi (fire qi) at the middle dan tien so that the fire qi can be cooled down sufficiently to maintain a consistency of harmonious balance of yin qi & yang qi in the body. An imbalance of yin qi & yang qi in the body is likened to operating an electrical appliance with the wrong setting of current. It will damage the internal organs, leading to a break down of health just as surely as night follows day. These types of qi imbalance can be rectified by a process of Qigong attainment known as wu xi chao yuan (five energies heading towards the source). Wu xi chao yuan can only come into being under certain conditions. Namely: when the body is free from restlessness and the presence of ching is constant; when there is a steady supply of qi flow which stabilises the mind from which ching shen (essence of consciousness) is activated, while ling shen (the subtlest of all human energies) remains consolidated within; when physical constitution is unperturbed while the interaction between xin (meditative desire) and yi (mental intent of resolve) are in harmony; and when the qi storage at the five yin organs - heart, lungs, liver, kidneys, spleen - are neither too yin nor too yang. The attainment of wu chi chao yuan will lead to the culmination of liu-he (the unification of the six harmonies of the body, xin, yi, qi, shen, & voidness). The attainment of lui-he is deemed as the reproduction of the actual universe which encompasses all that is of heaven & earth - the heaven being deemed as the macroscopic universe and the earth being deemed as the embodiment of the human body which is the composite of a microscopic universe. The development of liu-he enables the qi dynamics of the internal physiological systems and the external activities of the body to merge together to become a single entity of oneness, which is then further developed through union with yi (mental intent of resolve), and upon which the ultimate unification between heaven, earth & man is forged, whereby all matters dissolve into voidness, and voidness is what gives rise to the formation of matters.