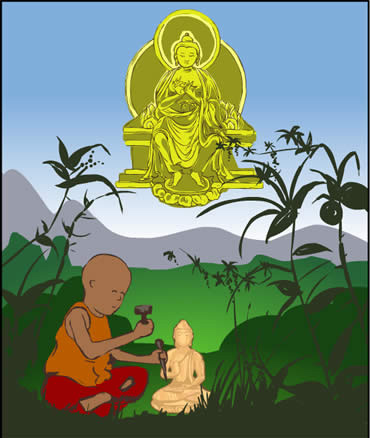 How to be a Good Student

Once upon a time, a young orphan went to the Shaolin Temple and asked to see the Abbot.

When the young boy came before the Abbot, he knelt down and said: “Honourable Master, would you please accept me as your student and teach me Kung Fu? I will follow your instruction and serve you anyway I can, and I promise I won’t let you down.”

The Abbot decided to put the young boy through a test to see whether he was suitable or not as a student, so he said to the young boy: “Of course I will teach you Kung Fu, but since I am about to be away for one year to take care of some monastic business in some far away provinces, could you do something for me in my absence?” The young boy was so pleased he had the chance to serve the Abbot that he readily agreed to the request.

The Abbot took the young boy to the nearby forest and pointed to a big tree: “Could you cut down that tree and use it to carve a Buddha statue for me?” The boy quickly replied: “This I will gladly do, Honourable Master. I promise the statue will be ready upon your return.”

Next day, as soon as the Abbot left the monastery, the young boy went to the forest and chopped down the tree with an axe and proceeded to make a statue of Buddha with it. Determined to please the Abbot, he worked with his best effort to make a fine carving of it.

By the time the Abbot returned to the monastery a year later, the young boy had completed the carving of a five feet tall Buddha statue and was eager to present his pride and joy to the Abbot. Having examined the Buddha statue closely the Abbot decided to give the young boy a further test. “The workmanship of this statue is very good but it isn’t what I was expecting. I need a statue smaller than this. Since I am due to be away for another year, could you use the time to make this Buddha statue smaller for me?”

On hearing this, the young boy was very disappointed but none the less agreed reluctantly to make the statue smaller. Besieged by the lack of appreciation and unhappiness, the young boy found he had to force himself to work. Six months on, he was shocked to realise he had carved an ungainly looking Buddha with a crooked, unhappy face.

The boy was so depressed with what he had done that he could not bring himself to work any further and ceased all work on the statue. Days passed into weeks and weeks into months, the Abbot was due to return shortly, and the boy felt the Abbot would surely reject him as a student for his lack of effort. The more he thought about it, the unhappier he became.

Awakening with a start one morning, he came upon the sudden realisation that if he truly wished to become a student of the Abbot, he must do his best to bring true his promise to the Abbot. Otherwise, why should the Abbot accept him as a student? If completing the carving of the Buddha is what it takes to please the Abbot, then he should put in his best effort and learn to enjoy what he had to do instead of wallowing in resentment.

The change of his perspective proved to be the turning point he needed. He became happier and with newfound patience and determination, he went back to work on the statue. In spite of the shortness of time, the boy managed to reduce the size of the Buddha to two feet tall with a smiling face, by the time the Abbot returned.

The Abbot was pleased with what he saw but decided to give one final test to the young boy. “You did a splendid job but the statue is still a bit too big for what I need,” said the Abbot. “It just so happens that I am due to journey to another monastery in a few days time to give teaching for one year, could you possibly make the statue even smaller while I am away?”

This time, the young boy showed no sign of disappointment for he had learned the importance of patience through having conquered himself. So he answered joyfully: “Honourable Master, I will do exactly as you said.”

For the next twelve months, the young boy spent every available moment he had to refine the carving of the Buddha. The face of the Buddha became increasingly lifelike as it reflected more and more the joy and loving care the boy brought to his work.

By the time the Buddha was refined to a two inches tall statue, the Abbot had once again made his way back to the monastery. Upon seeing what the young boy had done with the statue, the Abbot knew for sure that this young boy had passed the test and would made a good student. The young boy went on to fulfil the high hope of his master and became one of the best students in the Shaolin Temple.