What is the Purpose of the Three Preliminary Paths of Liberation? 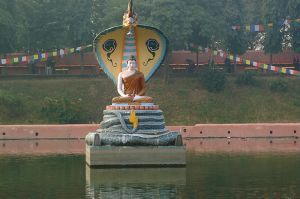 Their purpose is to provide all beings with different expedient means by which True Wisdom can be cultivated in accordance to the karmic potentiality and intellectual capacity of each being.

The first path is for those who are referred to as the Hearers whose sole purpose is to seek personal deliverance. Their goal is to attain the state of Arhatship - the Realm of Sainthood. The Arhats, the Worthy Ones, also referred to as Lohan in China, are deemed as sages of exemplary character, free from worldly desire and illusion. Their strict observance of the Pratimoksha - the Ethics of Abstention - which refrains them from engaging in unwholesome activities and enables them to develop in due course of time the perfect cognisance of the Four Noble Truths and delivers them to the holy state of Nirvana known for qualities which are the exact opposites of human conditions. Qualities such as: authentic self as contrasted to false self; infinite as contrasted to transient; wholesomeness as contrasted to unwholesomeness; rapture as contrasted to unsatisfactoriness. Moreover, there are two types of Nirvana: the first type is that of the Arhat who is free from further rebirth in worldly existence, but still possesses a physical body; the second type is that which the Arhat achieves at death when the psycho-physical aggregates dissolved for the last time. While the realisation of Arhatship leads to Nirvana, the objective of the Arhats is entirely focused upon the liberation of the self, thus the meritorious virtues collected by a Hearer are reserved principally for self-benefit.

The second path is for the Solitary Realiser whose wish is to gain personal liberation and higher enlightenment. Their goal is to become Pratyeka-buddha - the Solitary Awakened One. These are sages who by means of their own effort attain sublime comprehension of the twelve inter-linking factors of conditioned arising and thus attain enlightenment for themselves, but only for themselves. They are said to have cognised that the world-system in which we exist is merely one single continuum of collective consciousness formed of the infinite folds of energy particles which, as a result of the up-surge of energy matters emanating from the infinite cyclic rebirths of sentient beings, activate the manifestation of infinite phenomena we come to experience in our world-system. In term of Holiness, Pratyeka-buddha is positioned between the Arhats and the fully enlightened Buddha. The Pratyeka-buddhas make no effort to enlighten others, for they are said to have attained the understanding of conditioned arising but not the omniscience of the true nature of Dharma.

The Solitary Realisers accumulate more meritorious virtues over a longer period than the Hearers, but as Pratyeka-buddhas, they do not possess the meritorious qualities which characterise a fully enlightened Buddha. Qualities such as the unobstructed omniscience of all mundane and supramundane phenomena, or that of the ten powers which are the knowledge of: what is feasible and what is not; the karmic actions of causality in the lives of all beings past, present and future; the superior and inferior faculties of all beings; the different inclinations and tendencies in all beings; the manifold constituents of the universe; the causes leading to various realms of existence; the origination of purity and impurity; meditative realisation of emptiness, formlessness and passionlessness; the recollection of past lives and foresight of death, transmigration, and rebirth; and the deliverance of mind through the extinction of all defilement.

The third path is that of the Bodhisattva Path. Bodhisattvas are those sages of enlightened minds who often personify the perfect attributes and virtues that are seen in the Buddhas themselves. Their non-conceptual cognition of the world reveals to them that whatever suffering there is in the world, arises from the desire for one's own personal happiness, and whatever true happiness there is in the world, derives from desiring happiness for others. Their unwavering wish to attain Buddhahood is not for the pursuit of their own personal happiness but to gain the indispensable skill to share with others the most expedient means to actualise their release from the cyclic existence of ever-recurring unsatisfactoriness. Bodhisattvas voluntarily take rebirth over incalculable lifetimes in a diversity of physical forms and environments, not out of ignorance of their nature of unsatisfactoriness, but out of compassion and altruistic intent for the welfare of other beings. The undertaking of the Bodhisattva Path is distinguished by four different phases: the ordinary path while one maintains a home life as ordinary beings do; the determined path when one vows to win awakening; the compliant path when one lives in compliance with the Bodhisattva Vow; and the non-returning path when one is set on full awakening with the single-pointed mindfulness of purpose.

Bodhisattvas who embody the practising of the paramitas - the transcendent virtues they perfected in the course of their development - are associated with four main types of enlightened actions which they use to promote what is beneficial for other beings. These enlightened actions include: pacifying suffering and harmonising what is in disarray; accomplishing the true potential of beings both spiritually and materially, performing Acts of Faith to benefit others on a large scale; and the resolve to implement wrathful actions out of compassion to prevent the expansion of the greater evil while promoting the greater good of beings.