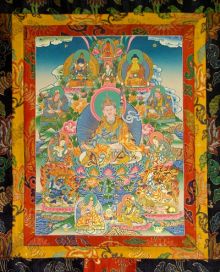 Bodhisattvas are often referred to as Awakening Warriors. They are beings of Awakened Mind who seek to attain Buddhahood through the systematic practice of the Paramitas - Perfect Virtues - so as to promote what is beneficial for the awakening of Sentient Beings into the true state of reality. The goal of the Bodhisattvas is not to enter into Nirvana - a Unified State of Oneness with the Absolute - until all beings are liberated from the karmic fetters of cyclic suffering.

Earthly Bodhisattvas are those individuals who have attained at least one of the ten Bodhisattva Stages of development in addition to having realised the three stages of the Path of Accumulation: that of Aspiration, Intention, and Application of Bodhicitta - the compassionate mind which aspires to attain full enlightenment for the sake of the welfare of all beings. The ten Bodhisattva Stages are part of twenty two successive stages of development in the cultivating of Bodhicitta leading ultimately to the attainment of Buddhahood.

Transcendent Bodhisattvas are those Bodhisattvas who have attained Buddhahood but have postponed their entry into Nirvana. They manifest in a great variety of forms which range from those of divine bodies to those of physical bodies of ordinary beings. The goal of Transcendent Bodhisattvas is to lend assistance to those individuals who have aroused from within their heart of hearts the essential aspiration and determination to free themselves from the unsatisfactoriness of cyclic sufferings.