What are Energy Fields? 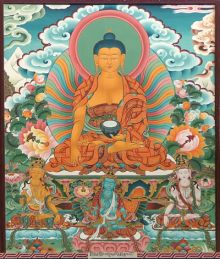 All matters in the universe, both sentient and non-sentient, are in essence different manifested collections of elements configured and assembled together in accordance to their specific pattern of identity-continua. When each of these manifested collections - composed of earth, water, fire, wind, space and consciousness - are further divided to their most subtle constituent level, what is revealed therein are the fields of energy which hold the pattern of identity-continua of that object. All aspects of manifested forms - material, non-material or sentient - share a certain similar nature of sameness, yet remain identifiable by their individual uniqueness. Just as the measurement of alpha, beta, theta and delta - the different configurations of brain wave rhythms - gives a reliable indication of the type of human psycho-physical activity being undertaken, the variance of the electro-magnetic fields of the human body gives an equally reliable indication of that person's psycho-physical well-being. There are also far subtler, almost intangible, etheric fields, such as ling qi, which indicate the accumulated wisdom, holiness and transcendental merits embodied by an object, or person, due to former association with virtuous actions from a former moment in time.

One such etheric field, the Field of Merit, manifests as an intangible glowing of aura of pure refined light around the body of a virtuous being or holy object - itself a living ledger of all the positive karmic imprints generated by such a being or object since time primordial. A Vajrasattva, a Diamond Being - one who has the capacity to eliminate spiritual impurity, especially neglected commitment to guru devotion and spiritual development - is capable of extending the efficacy of their Merit Field to provide blessing of holy grace and refuge to a devotee who seeks intervention to overcome difficult conditions in the present. The living embodiment of Prajna-paramitas (Perfections of Transcendent Wisdom) - a Diamond Being who holds firm to the efficacy of the interaction between Prajna-paramitas and the Single Truth in Nature - can perform an Act of Faith through deep meditative absorption whereby miraculous phenomena, encompassing a process of cocreating with nature, can be activated to bring forth a satisfactory outcome for the devotee.

An even more subtle etheric field - totally inaccessible to the detection of ordinary mindfulness - can be found in the Buddha-Field which is an emanation of the Wisdom of a Fully Enlightened Being. There are various levels of Buddha-Fields. Some can only be seen by a Buddha, some can only be seen by a Bodhisattva, and some can be seen by the beings who fulfil their wish to be reborn as a result of their accumulation of merit.