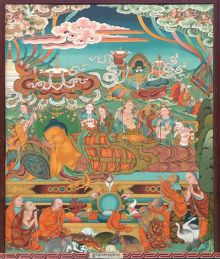 Nirvana is the primary goal of spiritual practice. It is the result of having first attained the realisation that all ego-based phenomena are formless illusion and that their existence is the source of all suffering. It involves having rendered all non-virtuous karmic factors harmless and all compulsive volition completely pacified. Nirvana is a state when one discovers the identity of one's true self with the absolute as opposed to the continuous dwelling in the affectation of the artificial-self. It is also described as the bliss in freeing one's primordial pure nature from the transient impure aggregates. Nirvana represents the attainment of oneness with the absolute, when all roots of afflictive factors come to extinction.