What is Dependent Origination? 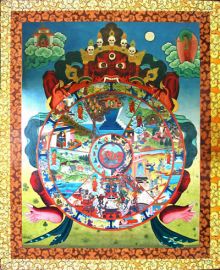 Dependent origination is the transcendental dynamic of karma and delusion which binds us to samsara. The root presence of ignorance leads to the arising of karma, which activates consciousness of karmic imprints, from which the transitory collection of psycho-physical aggregates is engendered. Once formed, it gives rise to the six senses. When consciousness of karmic imprints and the six senses come into contact with objects, it produces conceptual awareness which distinguishes such objects as visually pleasing, non-pleasing or neutral. This, in turn, gives rise to the awareness of feeling which distinguishes such objects as either pleasurable, painful or neutral. It is from the arising of feeling that the craving of not wanting to be separated from what is pleasurable, and the craving to be free of what is painful are generated. From craving, we develop grasping which can be attachment to tangible form of sense-desire, or grasping onto erroneous view. It could also be grasping onto unwholesome conducts, or grasping onto the self as an inherently independent entity. From grasping, the existence of fully potentialised karma come into being. It is the rebirth of fully potentialised karma which leads to the arising of recurring cyclic samsaric existence of birth, sickness, ageing and death.