What happens when one acts in opposition to the Dharma? 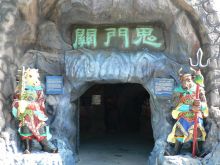 All manner of forms reveal the formless true pattern. There is nothing in the world without the true pattern, and no such thing as the true pattern without forms. Only by becoming fully aware of the true pattern of all forms, including those which we are inclined to repress, will the mind become awakened and true insight become manifest. When one acts in opposition to the Dharma, one instantly loses sight of the true pattern. Instead of clarity of insight, confusion and restlessness set in. All difficulties in life arise from a lack of mindfulness in relating our cognition to the nature of cause and effect. When the intent and expression of the mind, speech and body do not resonate in a harmonious pattern with the absolute, all our effort will fail to overcome obstacles or pacify difficulties, for whenever we contravene the integrity of the natural pattern of the absolute, the matrix of the universe will configure itself accordingly, in response to the cause of our infringement, to effect a multitude of conflicts in our lives. Lao Zi had this to say in the Tao Te Ching: "Disorder in the world springs from the wiliness and willfulness of people. Only when people abide by the simplicity of the Tao (Dharma) will there be peace, stability and goodness in the world."