Gem of Wisdom for Daily Reflection: “Openness attracts openness. Sincerity and truthfulness are the foundations of authentic relationship; whereas fear, the sign of obscuration, is its biggest foe.”

What is the significance of developing a Tranquil Mind in Dharma practice? 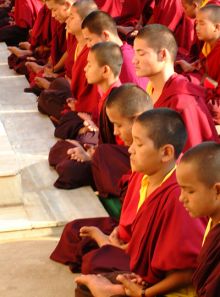 The Confucian Classics 'Da Xue' - The Great Learning - expounds the condition wherein, whenever a person is besieged by emotions such as fear, worry, joy, or grief, his mind would cease to reside in him. Having thus become absent-minded, he will stare but not see; listen but not heed; eat but not savour. This illustrates what is meant by "...the True Transformation of the Self consists in the Rectification of the Mind." Similar insight is reiterated in Classical Buddhist Scriptures: "Unbridled Emotion and a Restless Mind summon all demons and evil spirits into the Self of the traveller...".

Under the contaminated influences of sensuous desire, conceit, ill-will, fear of uncertainty, envy, laziness, restlessness, and ignorance, a state of self-induced spontaneous compulsiveness surges forth to entrap the unsuspecting into generating further causes for future recurrences of unsatisfactory conditions; thus denying the afflicted any prospect of realising liberation through the cultivation of ethical discipline, meditative absorption and wisdom, with which one is transmuted from a state of 'non-being within being' into 'being within non-being' - a virtual unification between that of Voidness and Appearances, that of the Relative Truth and the Ultimate Truth, whereby one is progressed to 'being in the world but not of the world' - a state of realisation which can only be brought about by having journeyed on the Path for Self-Liberation - the goal of which is Self Liberation through the attainment of Arhatship (Sainthood) in the land of Nirvana.

It is upon the foundation of assimilated wisdom from the Path of Self-Liberation which prepares one to commence on the Middle Path for Universal Liberation, which embraces the ethics of abstention from the Path of Arhatship, as well as the ethics of engagement of the Bodhisattva Path which deals with the accumulation of virtuous merit (grace of holiness) and the accomplishing of others by sharing with them the altruistic means to win release from the bondage of recurring suffering in the temporal existence. This is the main reason why it is so essential that no lesson can truly commence until the mind of the student is quiet and tranquil. But ask not whether your mind is quiet or not. The question is whether your mind is reverent or not. With reverence, the mind is instantly quiet. Without a quiet mind, how can one recognise the nature of one's True Self? Without such understanding, how can there be enlightenment?