What is the role of an Authentic Teacher? 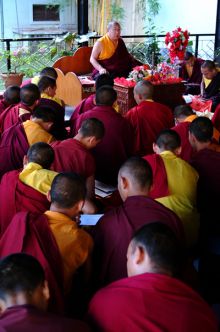 The Classical Confucius Texts expounded the superior teacher as not restricted to one way of teaching; his method is different for different individuals with their characters, abilities and external circumstances taken into account. Sometimes he is like the seasonal rain that nourishes the trees and the grass; sometimes he perfects virtue and shapes character; sometimes he helps to develop the talents of others; sometimes he explains and answers queries; sometimes he teaches secretly, by example of his action, so that others may learn to correct and cultivate themselves; sometimes he prunes the diseased branches to prevent the disease from spreading to the rest of the plant through reprimand and discipline, for what constitutes the wisdom of a superior teacher is to be able to cultivate each student according to their peculiar attribute and idiosyncrasy.

Another role of the superior teacher is to be that of a Mentor of True Awakening in whom others can take refuge in his guidance. The job of a Superior Mentor is like a mirror. He reflects the questions and uncertainties which lurk within the mental consciousness of the students, who cannot express nor comprehend their state of being due to their attachment to anxiety and subjective views.

The Pristine Wisdom of Dharmadhatu - the Sphere of the Nature of Reality - is the direct knowledge of the whole universe, with all its different realms of existence and their infinite modes of manifestation thoroughly pervaded by Reality itself; that it is the Voidness of Time and Space which gives rise to the conceiving of appearance, but it is also into Voidness of Time and Space that the appearance of form disappears, for Voidness is Form and Form is Voidness, both are non-different from the Absolute Reality of All Things.

The Pristine Mirror-like Wisdom is the specific quality of an Enlightened Mind which summons no subjective reaction, no subjective fixation, just perfect pristine objectivity. It reflects all objects of the world it sees as exact replicas, yet is fully aware of their true state of nature underneath, and still unaffected by the negative properties it reflects for nothing it reflects will cling to it. This is quite unlike the working of the gross mind which also acts like a sort of mirror, but all the objects it reflects cling to it and coagulate into a coating of grime which obscures the objectivity of what the person sees.

The Pristine Wisdom of Equality enables the Enlightened Mind to view all things with flawless objectivity. Having perceived the same common reality shared by all things, it extends the same impartial disposition of compassion and equanimity towards all.

The Pristine Wisdom of Discriminative Discernment enables the Enlightened Mind to view all things equally, yet still be able to differentiate their individual features without prejudice. It views all objects not only in their entirety or variance, but also views these properties together with all their peculiarities as well as their interdependent links as a single entity. In the pristine vision of the Enlightened Mind, it observes unity and difference simultaneously, fully aware of the uniqueness of each individual object and their indisputable links to others without dissolving nor embellishing the significance of either.

The Pristine Wisdom of All-Accomplishing is the skilful method used by the Enlightened Mind to cultivate spontaneously and naturally what is beneficial for all living beings. To whoever is in need of help, the Enlightened Mind is never far away to lend their deliverance. All one has to do is establish the recognition of an authentic teacher from whom one can seek guidance in a time-honoured process referred to as taking refuge.

Those who take refuge in a qualified mentor gain true reflection on the nature and dependent origination of their conditions, thus opening the gateway to liberation, and with it a clear sense of direction as well as the safe means to experience for themselves the effect of solutions to their problems, whereby sufferings cease as remedies prescribed by the mentor are honoured and implemented.