Tibetan Buddhism comprises the four lineages of Nyingmapa, Kagyupa, Sakyapa, and Gelukpa, whose unbroken lineage of transmission and enlightened masters can be traced right back to the time of Buddha Shakyamuni 2500 years ago, in the 5th century BC.

Songtsen Gampo, the founder of the Tibetan Empire in the 7th century, is traditionally credited with the introduction of Buddhism to Tibet through the influences of two of his wives - Princess Bhrikuti Devi from Nepal and Princess Wencheng from China. They are both devoted practitioners of Buddhadharma and are regarded as the emanations of Green Tara and White Tara respectively. 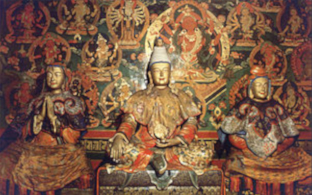 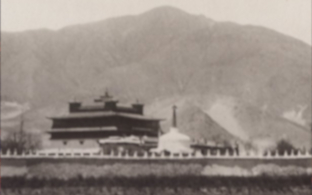 Songtsen Gampo, who initiated the creation of the Tibetan alphabet that evolved into a Classical Tibetan language, would play a pivotal role in making it feasible to have Buddhist scriptures translated from Sanskrit into Classical Tibetan during the reign of King Trisong Detsen, who invited Santaraksita, Padmasambhava, Vimalamitra and many other Indian Buddhist Masters to Tibet. It was at Samye Mighur Lhundrub Tsula Khang (Shrine of Inconceivable Unchanging Spontaneous Meditation) the first Buddhist and Nyingma monastery in Tibet that the first seven Tibetan monks were ordained.

Built as a representation of Mount Meru, Samye Monastery was completed and inaugurated in 779AD. It was constructed in a style that was based on the design of Odantapuri Monastery, the second oldest Indian Buddhist monastic university, that had twelve thousand monks at its height of popularity and was located in present day Bihar, Northern India, in close proximity to Nalanda, the largest and the oldest Buddhist University in India.

Ngangyur Nyingma (school of the ancient translations) is the oldest of the four major lineages of Tibetan Buddhism. The Nyingma lineage begins with Vajrayana revealer Guru Padmasambhava whose presence and activities in the world were predicted by Buddha Shakyamuni.

The teaching of the Nyingma tradition is founded on the first translations of Buddhist scriptures from Sanskrit into Classical Tibetan at the Samye Monastery. Its Vajrayana or Tantra lineage traces its origins to the emanation of Amitabha and of Avalokitesvara. Its Kama or oral lineage is one of the two modes of transmission of the Sutrayana and Vajrayana teachings of the Nyingma school. The other one is the Terma lineage.

Sutrayana encompasses the teachings of both Hinayana and Mahayana and is referred to as the Causal Vehicle because it follows a path of practices that accumulate both merit and wisdom for the purpose of attaining the ultimate state of enlightenment. 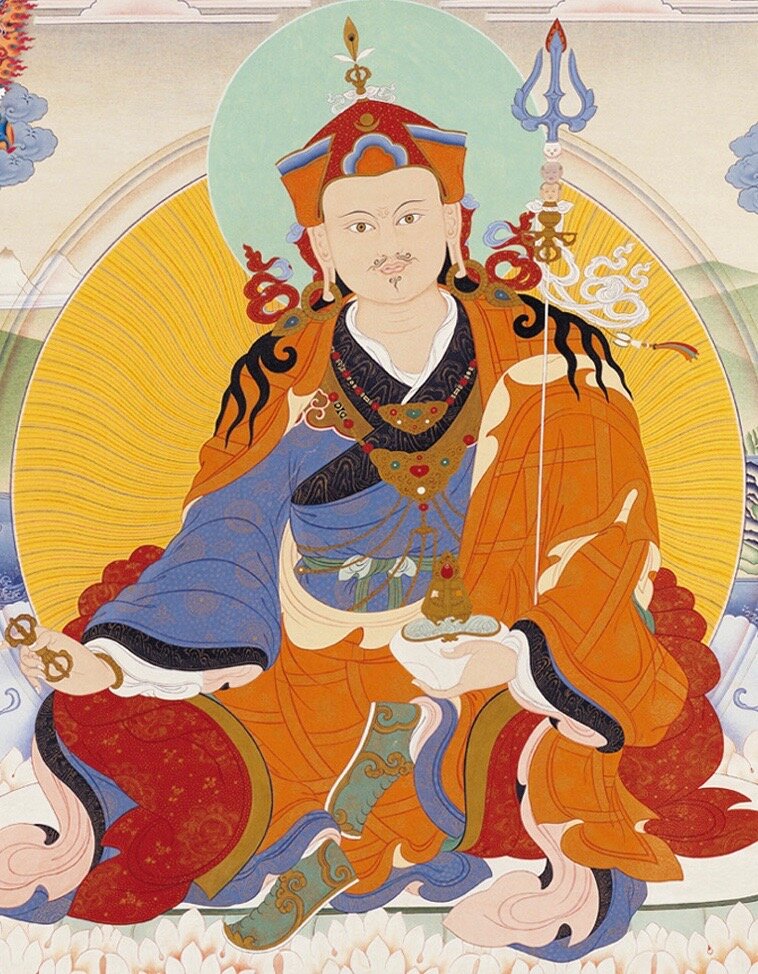 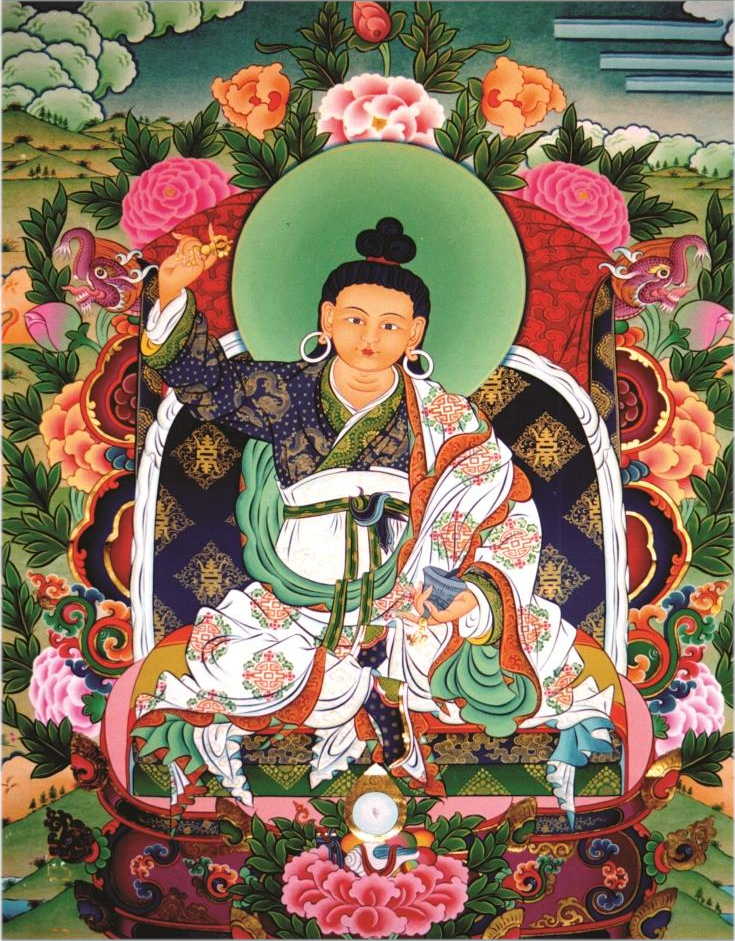 The Terma lineage is the revealed transmission lineage of hidden treasure. Terma such as texts or ritual objects were concealed esoterically by Guru Padmasambhava and Yeshe Tsogyal within rock, crystal, earth, tree, water, space and the mind-stream of the tertons (treasure revealers) for future discovery at auspicious times when all the conditions are ready for the revelation. Namchö Space Treasure transmission, the Pure Vision revelation of the Nyingma Palyul lineage, was one of the Terma as revealed by Mingyur Dorje at age sixteen in the 17th century. 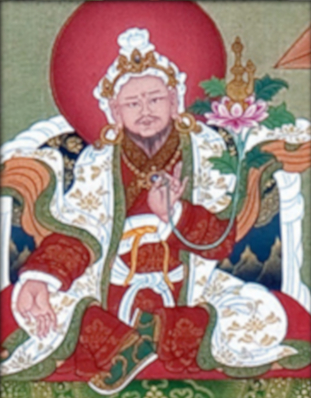 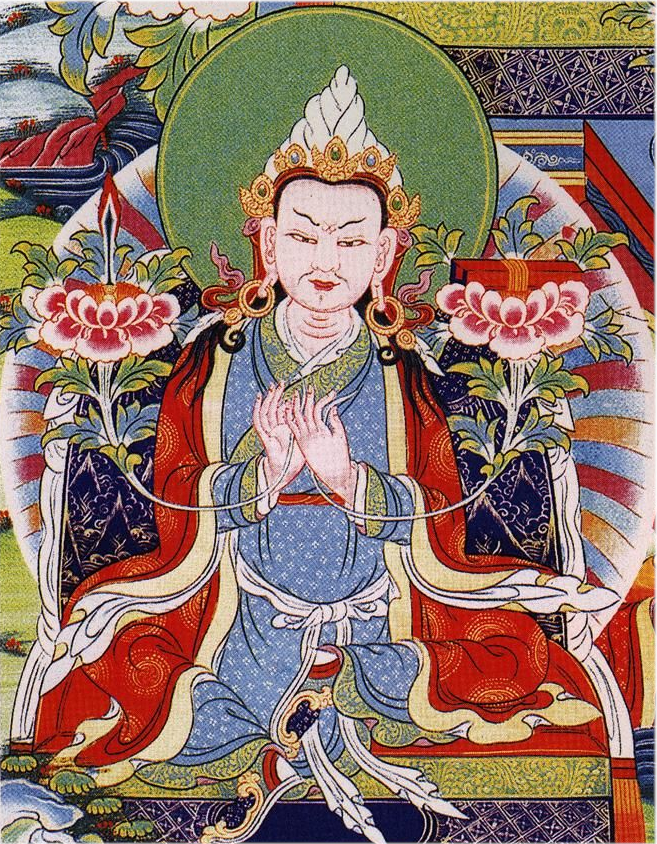 Tri Ralpachen together with his grandfather Trisong Detsen, and Songtsen Gampo were revered as Three Dharma Kings of Tibet. During his reign, Tri Ralpachen built one thousand monasteries and invited many Indian Buddhist masters such as Surendrabodhi, Shilendrabodhi, Danashila to Tibet to work with the Tibetan learned masters such as Ratnarakshita, Dharmadashila, and the lotsawas(translator) Jnanasena to revise and standardise the terminology and grammatical structure used in the earlier translations of Buddhist texts by relying on a Sanskrit-Tibetan lexicon - Mahavyutpstti - that had been developed since the time of Songtsen Gampo. Tri Ralpachen, decreed all Buddhist texts must be translated directly from Sanskrit. 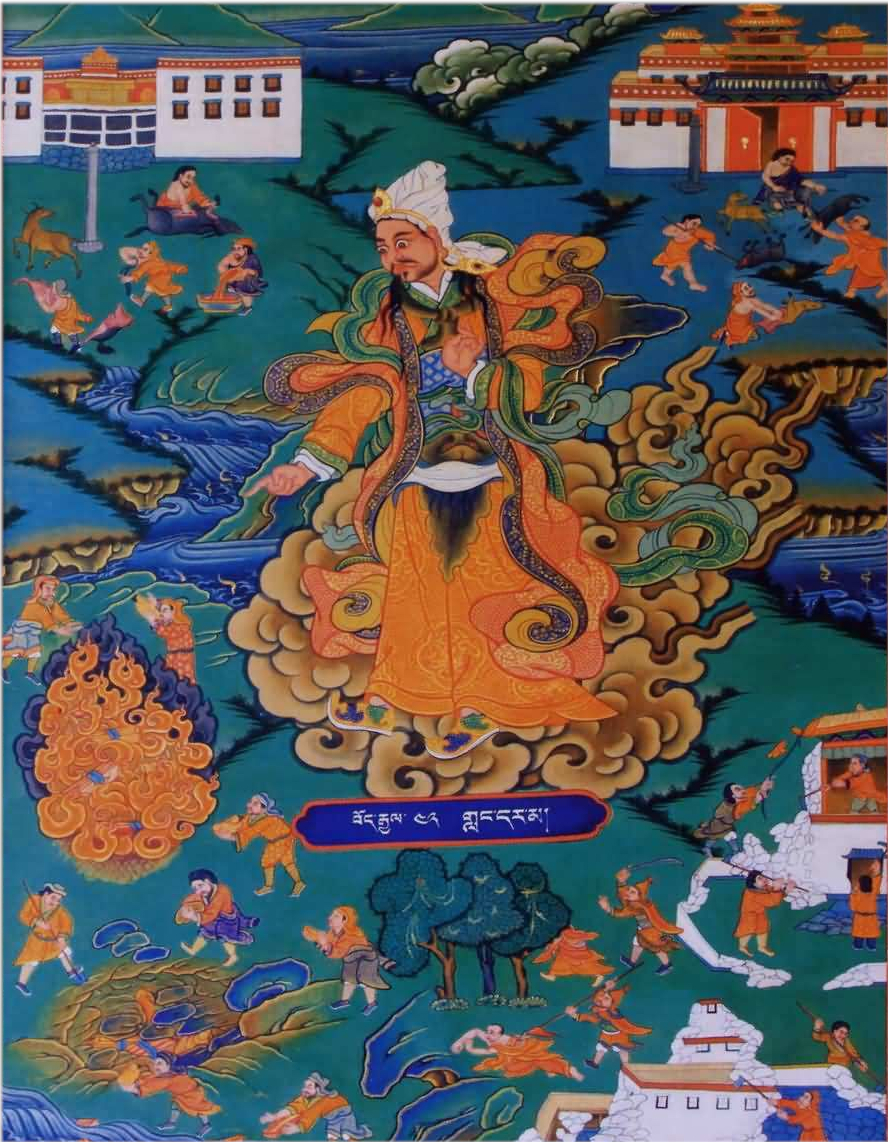 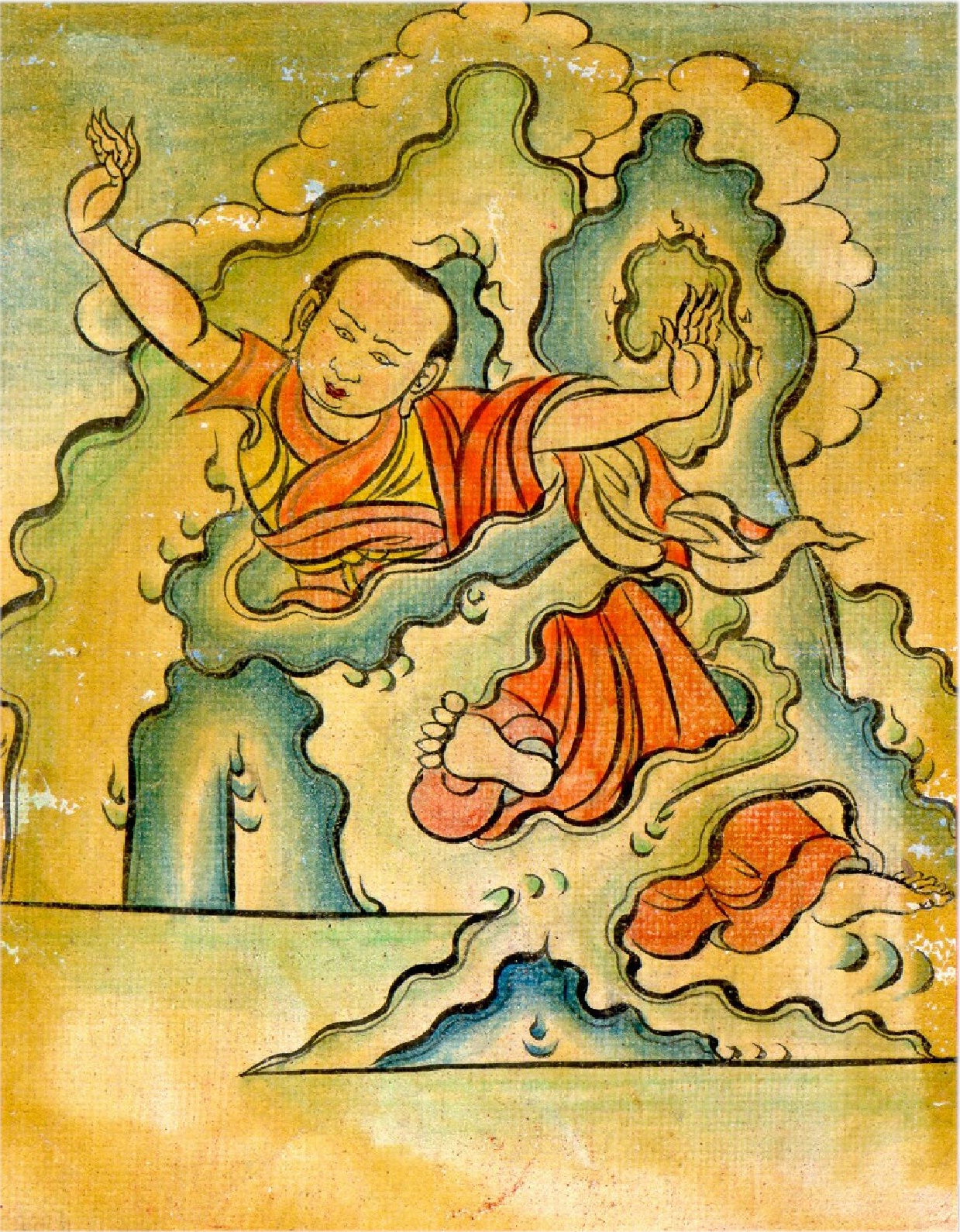 After Tri Ralpachen was assassinated in 838 AD by the supporters of Bon - the native Tibetan religion devoted to the worship of local gods, his brother, Langdarma was placed on the throne. Under the influence of pro-Bon minister Gyaltore Taknye, Langdarma became increasingly hostile towards Buddhism and decreed the exile and killing of Buddhist monks and the destruction of Buddhist monasteries and Buddhist texts. Langdarma’s reign of persecution finally ended when he was assassinated by the Buddhist monk Lhalung Palgyi Dorje who was the emanation of Manjushri and the incarnation of His Holiness Penor Rinpoche at that time.

The revival of Buddhism in Tibet began in the late 10th century with the appearance of Terma text which restructured the practice of Nyingmapa and the founding of Sarma (New Translation) traditions which are based on the Buddhist teaching brought back to Tibet from India. Prominent Sarma schools included Kadampa, Kagyupa, Sakyapa, and Gelukpa.

Kadampa was founded in 1056 AD by Dromtönpa Gyelwé Jungné, the Tibetan disciple of the Indian Buddhist Master Atisha Dimpamkara Shrijnana, who was invited to Tibet in 1042 AD. It was Dromtönpa’s student Chekhawa Yeshe Dorje who first compiled the root text on the Seven Points of Lojong (Mind Training). 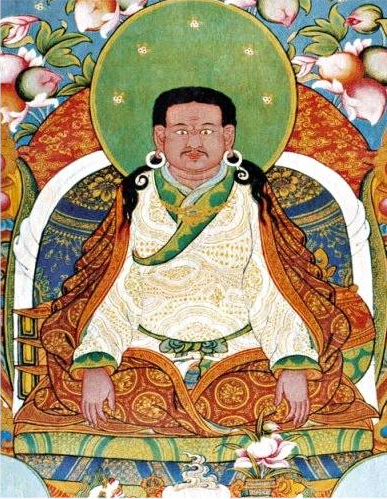 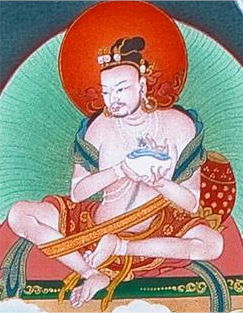 Kagyupa was founded by Marpa Lotsawa (1012–1097 AD), who traveled three times to India and four times to Nepal in search of Buddhist texts. His principal teachers include Naropa, Maitripa and Niguma. The Kagyu tradition gave rise to a number of independent sub-schools and lineages. The teaching of Kagyupa is centred upon the practice of Mahamudra (the Great Seal) and the Six Yogas of Naropa. 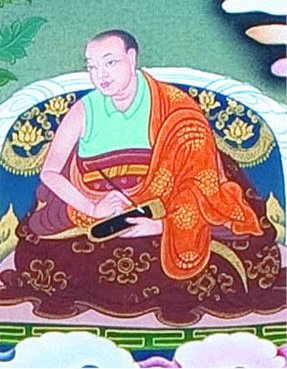 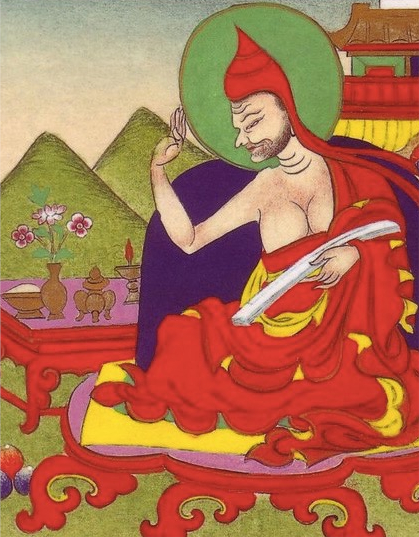 Sakyapa was founded in the late 11th century by Drogmi Lotsāwa Śākya Yeshe, who was a student of Naropa, Ratnakarasanti and other Indian panditas for twelve years. The tradition was consolidated by the Sakya Gongma Nam Nga ( Five Sakya Patriarchs), which included Sachen Kunga Nyingpo, grandson of Drogmi Lotsāwa Śākya Yeshe’s disciple Khonchog Gyalpo, a descendant of Khön Lucian Wangpo, who was a disciple of Guru Padsambhava and one of first seven monks ordained at Samye Monastery. The other four members of Five Sakya Patriarchs were Sonam Tsemo, Jetsun Drakpa Gyaltsen, Sakya Pandita and Chogyal Phagpa. The core teaching of Sakyapa is the instruction on Path and its Fruit that is based on tantric transmission of Hevajra Tantra. Other teachings include the Vajrayogini lineage of Naro Khachoma and the practices of the One Hundred Sadhanas. 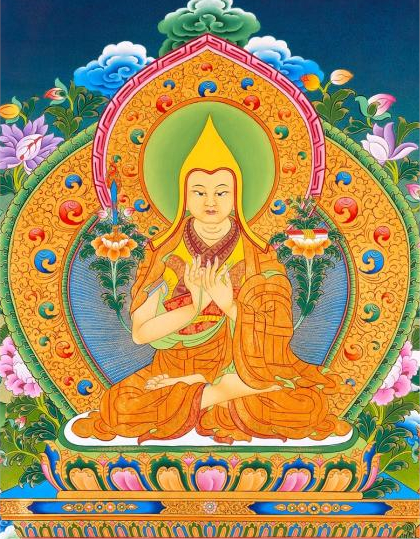 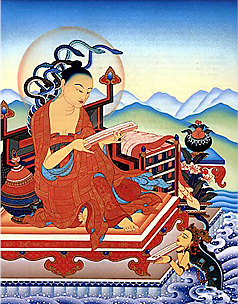 Gelukpa was founded by Tsongkhapa (1357-1419 AD) in the 15th century. Tsongkhapa started his Buddhist study at a young age. He later visited and studied in all the major monasteries in Tibet and developed a strong interest in the Madhyamika teachings of Nagarjuna and advocated the conservation approach of maintaining monastic discipline as a means of attaining the state of nirvana. Lamrim (Stages of the Path), the main practice of Gelukpa, which incorporates the teaching Kadam tradition, is based on the lineage of Atisha from the 11th century.

“These four schools are the bodhisattva heirs of the victorious Buddhas and represent four exquisite transmissions: the view that transcends all fixations of extremes are the adepts of Nyingmapa, who have mastered the esoteric power of the secret mantra and are the life-force of the teachings that preserve the pith instruction of the tantras and the sādhanas; purposeful in meditative practice are the adepts of Kagyupa, who have mastered the nicety of realisation and are the heart of the teachings that promote devotion to the lineage of their practices; diligent in the elucidation of commentary, the practices of the generation stage and the completion stage are the adepts of the Sakyapa, who are the eyes of the teachings that unify the essence of sutrayana and mantrayana; immaculate monastic conduct are the adepts of the Gelukpa, who have mastered the discourse of sutras and are the body of the teachings that encompass the complete path of learning the scriptures. All four schools come from the same source like children who share the same parents but take birth individually. Whichever lineage you follow, cultivate proper decorum in your interaction with others and apply yourself with devotion and pure view to bring forth the qualities of learning and the accomplishment of practice.”

This teaching entitled ‘Origin of Tibetan Buddhism’ is presented here by Tenzin Gyalpo Drakpa Gyaltsen Dondrup Dorje as his homage to all the Buddhas of the three times in ten directions.