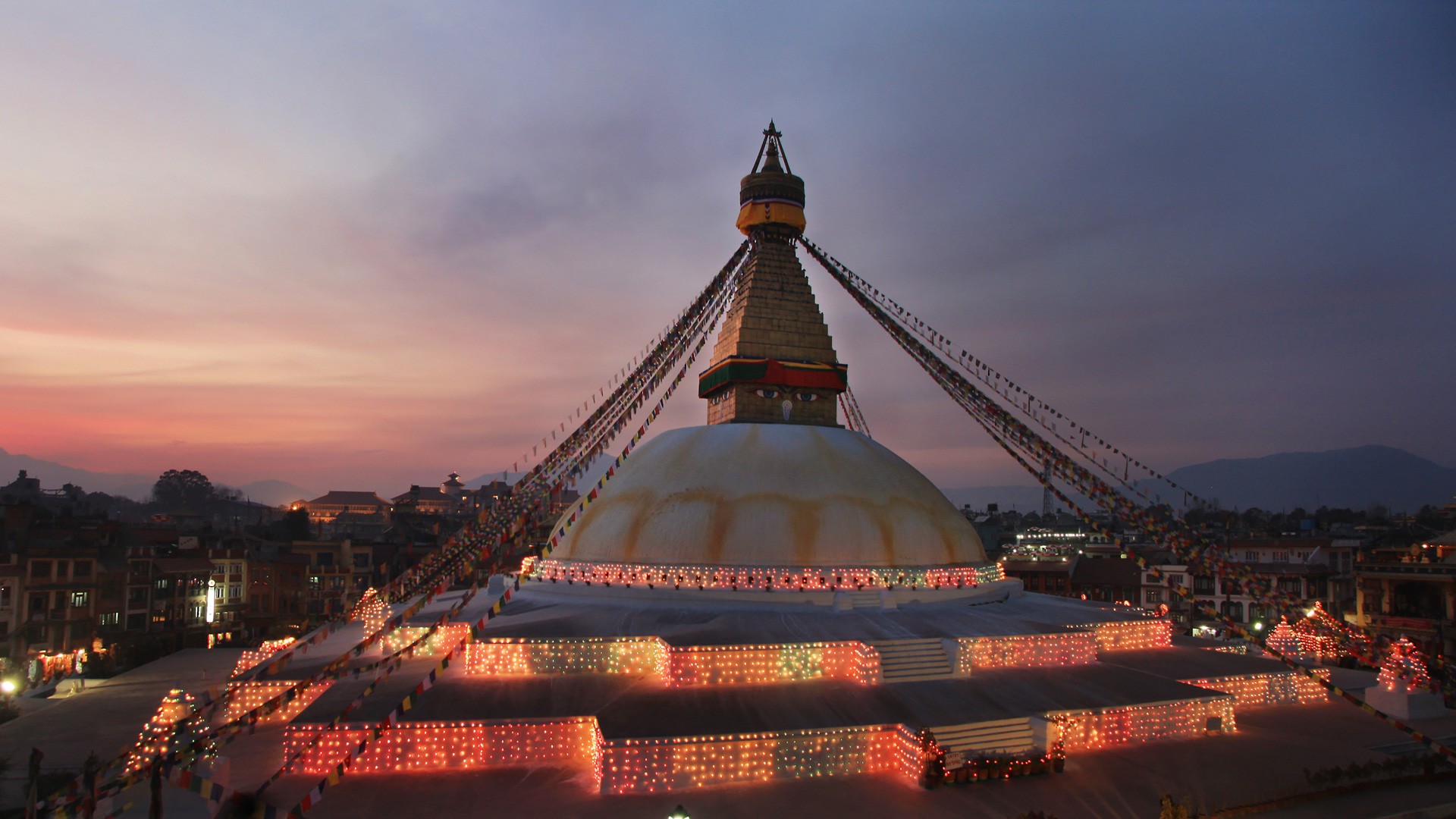 Bodhimanda (changchub kyil) is a term that originally refers to the very spot of vajrasana (dorjeden), the vajra seat under the bodhi tree by the river Nairanjana in Bodhgaya, India, where Shakyamuni Buddha attained enlightenment. It is also used to describe any places which promote the propagation of the sacred Buddhadharma.

Written by Guru Rinpoche’s consort Yeshe Tsogyal in the eighth century AD, Padma Kathang is a collection of hidden treasures (terma) chronicling the life of Padmasambhava, each of which was unvealed by a designated terton at a specific time. One of these terma, known as Sheltrakma, was retrieved by Orgyen Lingpa from the Lotus Crystal Cave (shelphuk), the first meditation cave of Guru Rinpoche in Tibet. In this terma, Shantarakshita (Shyiwa Tsho) related the legend of the Jarung Khashor Stupa to King Trisong Deutsen during the construction of Samye Monastery so as to motivate him to invite Padmasambhava to Tibet to subjugate the indigenous resistance that was hostile to the propagation of Buddhadharma. Another terma from the same collection known as Padma Kathang Sanglingma was revealed 200 years earlier by terton Nyang Ral Nyima Öser; but the one providing the most in-depth account was the Liberation on Hearing: The History of the Great Stupa of Jarung Khashor (chöten chenpocha rung khashor kyi logyü thöpé trolwa zhuk so).  It was given by Guru Rinpoche at the request of King Trisong Deutsen during Lama Yangsang Tukdrup empowerment. This terma was first discovered by terton Lhatsön Ngönmo (Lhawang Gyatso Drolo), who had the text copied and reconcealed at Samye Monastery in accord with the instruction of the prophecy for it to be rediscovered at an auspicious time later. This terma was unearthed by Yolmo Ngakchang Shakya Zangpo during the renovation of the Monastery in 1512 AD. Inspired by the revelation of this terma, Shakya Zangpo initiated the renovation of the Swayambhunath Stupa in Nepal, and successfully identified the location of the Spontaneous Mound charnel ground (Lhundrup Tsek), one of the eight charnel grounds where Guru Padmasambhava attained vision of the eight Kagye mandalas and accomplished the ritual practices (sadhana) of all eight tutelary meditation deities (yidam).

Towering 36 metres atop a hill at the northeastern outskirts of Kathmandu, Swayambhunath Stupa, known locally as the Great Boundha Stupa, and to the Tibetans, Chorten Chenpo, meaning the support of great offering, symbolised the enlightened mind of the Buddha, is most often referred to as Boudhanath, the Lord of Awakening.

Liberation on Hearing: The History of the Great Stupa of Jarung Khashor revealed the Golden Age of Buddhism in Tibet was the result of immeasurable aspirations made before the Great Stupa of Jarung Khashor during the time of the previous Buddha Kashyapa (Ösung). It recounted countless aeons before, the Bodhisattva Mahasattva Avalokitesvara (Chenrezik) made the sacred pledge before Amitabha Buddha (Öpakmé) to liberate all sentient beings from the quagmire of samsara. When he looked at the sufferings of the beings in the untamed land of Tibet from the peak of the Mount Potalaka (ripotala), tears of compassion from his eyes manifested as the two daughters of Indra, the King of Gods in the Heaven of the Thirty-Three. The youngest of the two, Little Purna (Ganchungma) stole some celestial flowers and as a result of her transgression lost her status as a goddess and took birth as a human girl into a family of poultry-farmers in the Kathmandu Valley of Nepal. She was given the name Samvari (Dechogma) by her father Prabhasvara.

As a grown woman, Samvari had physical relationships with four men from the lower caste and four sons were born. The father of the eldest child was a horse-keeper, the second a pig-keeper, the third a dog-keeper, and the fourth a poultry farmer. Samvari was very enterprising in running her family poultry business and amassed a sizeable fortune. After setting up her four sons as respectable householders, she approached the king to seek permission to build a large stupa to house the relics of the Buddha Kashhyapa. Impressed by Samvari's resolve, the king gave his consent to the request. Samvari and her four sons, with the help of a servant, an elephant and a donkey, immediately ferried building materials to the site bestowed by the king and commenced the construction.

As the project took shape and the size of the stupa grew bigger each day, local gentry incited by jealousy requested the king to stop the project arguing the completion of this stupa by a woman from the lower caste would be an embarrassment to the district. The king’s replied he had given permission to get it done and would not take back his words. Thus the stupa was known as Jarung Khashor. Jarung (it can be done); Khashor (words given).

Samvari died before the stupa was completed. Her four sons vowed to finish the project in honour of their mother. The construction of the stupa would take another seven years of building work and after a lengthy process of enshrining the stupa with sacred relics, precious objects and a multitude of offerings, it was finally completed.

On the day of the consecration ceremony, Kasyapa Buddha and an assembly of incalculable number of Buddhas, Bodhisattavas and deities appeared in the sky.  As a shower of divine flowers rained upon the stupa, divine music reverberated, and scent of divine incense permeated the air, the earth trembled three times to commemorate this auspicious moment of a stupa became inseparable from the wisdom mind of the Tathagata. The panoramic presence of all the Buddhas then transformed into a glorious sphere of light and dissolved into the stupa. The pervading light around the stupa remained for three days and nights before it subsided. Thus the stupa was also known as Lhundrup Tsek, the spontaneous all-encompassing stupa of all Buddhas.

Knowing aspiration made in front of this stupa would be blessed and answered, the four brothers agreed that they wished to fulfil the prophecy that in the aeons to come, when Avalokitesvara would become the tutelary guardian in the land of snow to the north to tame the beings there for the teaching of Shakyamuni Buddha, they would also take birth there to establish Buddhadharma in that very land.

The four brothers stood before the stupa and made their individual supplication prayers. The eldest brother wished to become a king who would propagate the spreading of Buddhadharma; the next one wished to become a learned khenpo to promote the precepts of the monastic order; the third one wished to become a tantric yogi who could wield power over negative forces; the youngest one wished to become a minister to coordinate the dharma activities of his three brothers. Thus it was by the power of their aspirations that they took birth respectively as King Trisong Deutsen, Abbot Shantarakshita, Guru Rinpoche and Minister Bami Trizher.

While this auspicious event was unfolding, the eldest brother had a mosquito land on his neck, and in his attempt to brush it away, the insect was accidentally killed. With compassion swelling inside, he prayed that this very mosquito would become his heir in the future. In accord with his wish, the insect took birth as Princess Pemasal when he became the king.

The donkey thought aspiration prayer would also be made for him in honour of his service over the years but none was forthcoming. Infuriated, the donkey made the aspiration that he wished to become a prime minister who would create obstacles to the dharma activities of the four brothers and in accord with his wish was reborn as the evil minister Mashang Trompa Kyé.

The long time servant of the brothers somehow became aware of the donkey’s perverted intention and made the aspiration to become a minister of religion to contain the harmful activities of the donkey, and was reborn as minister Gö Pema Gungtsen.

The elephant felt the same grievance as the donkey that no aspiration was made for him and so made his own aspiration to become a descendant of the eldest brother to extinguish their dharma legacy. He was reborn as Langdarma three generations after King Trisong Deutsen.

A nearby raven whose root of virtue resonated with the intention to benefit others became aware of the elephant’s aspiration and immediately made the aspiration to take birth at the same time as the elephant to put an end to his mischief. He was reborn as the bodhisattva Lhalung Palgyi Dorjé who killed the evil king Langdarma.

The teaching of Guru Rinpoche confirmed through the terma of Padma Kathang, the immeasurable powerful effect of aspiration made before the Stupa of Jarung Khashor which turned Tibet into a land of Bodhimanda. By following the examples of Samvari and her four sons, we can likewise fulfil our aspirations to promote the greatest benefit of all beings.  With firm devotion to the Three Jewels and maintaining pure view of the compassionate Vajra Guru, we too can truly become the sons and daughters of the Buddhas.

This teaching entitled ‘The Aspirations Made Aeons Ago That Turned Tibet Into The Land Of Bodhimanda’ is presented here by Tenzin Gyalpo Drakpa Gyaltsen Dondrup Dorje as his homage to all the Buddhas of the three times in ten directions.