The Verses Of The Eight Noble Auspicious Ones 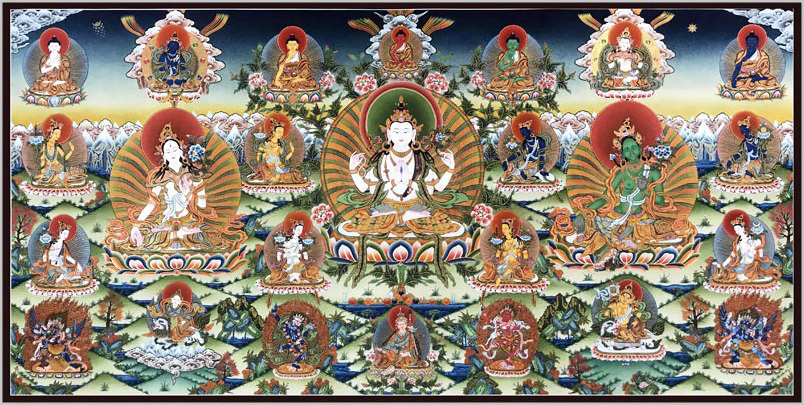 At one time, Shakyamuni Buddha (Sangyé Shakya Thubpa) is staying at Amrapali’s mango grove in Vaisali, a Licchavi youth named Suvikranta (tsel rap), which means ‘excellent skill’, requests teaching from Lord Buddha on how to protect himself from the fear and threat he might encounter in his life. Shakyamuni Buddha reveals the names of eight tathagatas, if he contemplates regularly, will eliminate the aforementioned obstacles in all his undertaking. The names of the eight tathagatas are listed in a prayer known as The Verses of Prayer to the Eight Noble Auspicious Ones (phakpha tashi gyepai tsiksu chepa), which was composed in 1896 by Jamgön Mipham Gyatso Rinpoche.

The discourse received by Suvikranta is preserved in the Noble Mahayana Sutra Of The Eight Auspicious Ones:

Homage to all the buddhas and bodhisattvas!

Thus have I heard:

At one time, the Blessed One was residing in Amrapali’s mango grove in Vaisali. A Licchavi youth named Suvikranta went there to pay respect. After he prostrated with his head to the feet of the Bhagavan, he made the following request:

“There are bhagavan, sugata, tathagata, perfect buddha who have completely realised their original aspirations, that if I hear their names, I will revere them with the crown of my head. By venerating these Blessed Ones with the crown of my head, I will not feel threatened nor be harmed by human or non-human, and should I need to present myself at a palace, I will feel at ease to present myself with no concern nor worry. If I remember their names, I will not have nightmares when I sleep, nor would I have fear entering into battle where weapons are drawn, for no sword will harm me and I will emerge safely. Please reveal the names of these bhagavan, sugata, tathagata, perfect buddha.”

Having heard his request, the Blessed One replied to the Licchavi youth Suvikranta:

“Suvikranta, there exists in the eastern direction a lokadhatu (jikten gyi kham) - a world known as ‘renowned with fame’ (drakden) - where the tathagata named ‘King of Illuminating Lamp’ , Pradiparaja (Drönmé Gyalpo) resides there.

“Suvikranta, there exists in the eastern direction a lokadhatu - a world known as ‘free from discouragement’ (kyowa mepa) - where the tathagata named ‘Determine To Fulfill Intent With Resolute Skill’, Parakramasthirasiddharthasaṃdhi (Tsalten Döndrub Gongpa) resides there.

“Suvikranta, there exists in the eastern direction a lokadhatu - a world known as ‘rapture’ (dé den) - where the tathagata named ‘Glorious One Renowned For Concern With All Beings’, Viśvacintāvistarakīrti (Künla Gongpa Gya Cher Drakpa Chen) resides there.

“Suvikranta, there exists in the eastern direction a lokadhatu - a world known as ‘free from obstacles’ (gek mé pa) - where the tathagata named ‘Glorious Ornament of Loving-Kindness’, Maitrālaṅkāraśrī (Jampé Gyen Gyipel) resides there.

“Suvikranta, there exists in the eastern direction a lokadhatu - a world system known as ‘dispelling obliteration’ (ché pa pang pa) - where the tathagata named ‘Glorious One Renowned For Virtue’, Puṇyakīrtiparamaśrī (Gewar Drakpa Pel Dampa) resides there.

“Suvikranta, there exists in the eastern direction a lokadhatu - a world known as ‘endowed with diversity’ (na tsok den) - where the tathagata named ‘Glorious One Renowned As Magnificent As Mount Meru’, Merukalpāryaparākramakīrtiśrī (Lhünpo Tarpak Pa Tsel Rap Drakpé Pel) resides there.

“Suvikranta, you should remember, contemplate and keep the names of these bhagavans in your mind. Suvikranta, these buddhas are endowed with immeasurable excellent qualities due to their original aspirations, their worlds are free from the influence of degenerations.

“Suvikranta, when you receive and remember the names of these bhagavans you will develop the excellent qualities that correspond to their original aspirations. You should contemplate their names whenever you lay down at night and whenever you are awake. If you contemplate their names before you begin any activity, your activity will for certain flourish. You should adhere to this understanding.

Having thus heard, the Licchavi youth Suvikranta rejoiced, satisfied and was delighted to recite these bhagavans’ names. He casted a shower of eight thousands flowers made of seven precious substances over the Blessed One, then after he circumambulated the World Honoured One, and embraced wholeheartedly this discourse in proclaiming the names of the eight auspicious ones, he departed.

Then Indra, the lord of the gods, who was present in the assembly paid homage to the Blessed One and said:

“I too will follow this practice of proclaiming the names of the eight auspicious ones.”

The Blessed One replied:

“Kausila, whenever you engage the asuras, the demi-gods (lhamin) in battle, you should proclaim this teaching and recite the names of these tathagatas if you want a successful outcome. Why is this so? It is because whoever proclaims these names is to become the perfect manifestation of bliss, fearlessness, reality, invincibility and serenity that transcend the challenge of all strifes and turmoil.”

Indra was so grateful to receive this most excellent discourse, he casted a shower of manadarava flowers over the Blessed One, prostrated with his head at the feet of the Bhagavan, then after circumambulating the Buddha three times, he declared with a joyful, virtuous, non-perturbed mind:

“May I behold the face of the Blessed One again in the future.”

Then together with the gods of the Celestial Heaven of the Thirty-Three, he departed.

The Licchavi youth Suvikranta, Indra lord of the gods, along with all the gods, human, asuras and gandharvas rejoiced and praised what the Blessed One had said.

This concludes the Noble Mahayana Sutra Of The Eight Auspicious Ones.

Benefits of remembering the Eight noble auspicious ones

The Noble Mahayana Sutra Of The Eight Auspicious Ones reveals the benefit of reciting the names of the eight noble auspicious ones before commencing on any activity because to do so will ensure a successful outcome of all undertakings. These tathagatas, having fulfilled their original aspirations, preside over their worlds that are thoroughly pure and free from the influences of the five degenerations (nyikma nga) which are:

Praise of the Buddhas

Mipham Rinpoche described whoever recites the names of these tathagatas is to experience the pristine purity of bliss, fearlessness, attentiveness and serenity of the tathagatas which bring harmony to all strifes and turmoils. Simply hearing their names will generate greater benefit than spending aeons in making offerings to the many buddhas of the three times. Immeasurable amount of benefits can be cultivated by contemplating, reciting and copying the names of these tathagatas.

Praise of the male bodhisattvas

The eight close sons (nyewé sé gyé) as mentioned in The Verses of Prayer to the Eight Noble Auspicious Ones, are in actuality the intrinsic emanation of the buddhas in the form of bodhisattvas appearing in the world for the sake of liberating sentient beings from the suffering of samsara (khorwa). One who recites their names, beholds the representation of their images, or contemplates their intrinsic qualities, will generate inconceivable amounts of benefit that corresponds to the noble quality one wishes to cultivate. These eight bodhisattvas and the supreme qualities of the buddha they embody are:

Praise of the female bodhisattvas

The eight auspicious goddesses (tashi lhamo gyé) appearing as the eight offering goddesses (chöpé lhamo gyé) in the prayer, are in actuality the intrinsic emanation of the buddhas in the form of female bodhisattvas (changchub semma). Being the consorts of the eight great bodhisattvas, they play an essential role in propagating Dharma in the lokadhatu (jikten gyi kham) of Shakyamuni Buddha - a world known as sahaloka (mi jé jik ten) which means ‘the land of forbearance’, for the beings there are strongly addicted to impulses of desire, anger and ignorance and show no regard for the consequences of committing non-virtues, while the bodhisattvas there have to endure the misdeeds committed by the deluded for the sake of attaining the twofold liberation for oneself and for all beings.

One who recites their names, beholds the representation of their images, or contemplates their intrinsic qualities, will generate immeasurable amounts of benefit that corresponds to the result one wishes to attain. These offering goddesses represent symbolically the pristine state of sense objects as pure offerings are:

These goddesses who manifest and demonstrate how pure offerings are presented to the buddhas of the three times are each renowned for their own unique blessing. To remember them is to be blessed with their presence to eliminate any obstacles or turmoils. These eight auspicious goddesses are:

Praise of The Protectors

Maha-Brahama (Tsangpa Chenpo) the creator, Maheswara (Dejung) the destroyer, Narayana (Semebu) the preserver, the three celestial devas (lha sum) known in India as Brahma, Shiva and Vishnu, are in actuality the intrinsic emanation of the three vajra (dorje) of the buddhas, representing the tathagata’s body, speech and mind in the form of celestial gods.

They are also the emanations of the lords of the three arya families of Avalokiteshvara, Manjushri and Vajrapani, appearing as kings of worldly protectors, tasked with the responsibility to preserve the integrity of buddhadharma in the saha world.

Indra - Sahasraksha of One Thousand Eyes - lord of the gods of the Celestial Heavens of the Thirty-Three at the peak of Mount Meru, is another protector of buddhadharma who offers support to those who follow a path of virtues.

Caturmaharajakayika devas, the Four Great Kings (gyalchen de shyi) who have attained the eight bhumi (miyowa) of the aryan bodhisattva path, and reside in the Heaven of the Four Great Kings located at the fourth terrace half way up the Mount Meru, are the worldly protectors (jikten kyongwa) tasked with guarding the four cardinal directions in the services of Indra. These four great guardian kings are:

Due to their aspirations made before the previous Buddha Kashyapa (Sangyé Ösung), the four great kings were reborn in the saha world of Shakyamuni Buddha to uphold the integrity of buddhadharma, and to offer support and protection to those beings of virtue, from the threat of non-enlightened entities and elemental forces. Hearing and remembering the names of these eight protectors will bring forth the blessings of auspicious conditions and munificent bounty of worldly happiness.

The innermost sanctum of these deities - the mandalas (kyilkhor) of the eight tathagatas, the eight male bodhisattvas, the eight female bodhisattvas, and the eight worldly protectors - are all included in the stanzas of Tashi Gyepa - The Verses of Prayer to the Eight Noble Auspicious Ones. To recite these verses daily is to pay homage to the Three Jewels and to invoke the blessings of these deities. To chant these verses with firm faith and single-pointed focus will pacify all misdeeds and obscurations, herald the advent of auspicious conditions that will transform all obstacles into beneficial support in one’s pursuit to attain the ultimate goal of liberation.

This teaching entitled ‘The Verses Of The Eight Noble Auspicious Ones’ is presented here by Tenzin Gyalpo Drakpa Gyaltsen Dondrup Dorje as his homage to all the Buddhas of the three times in ten directions.