Stupa - The Enlightened Mind Of The Buddhas 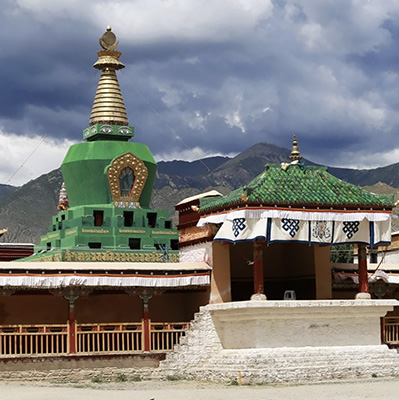 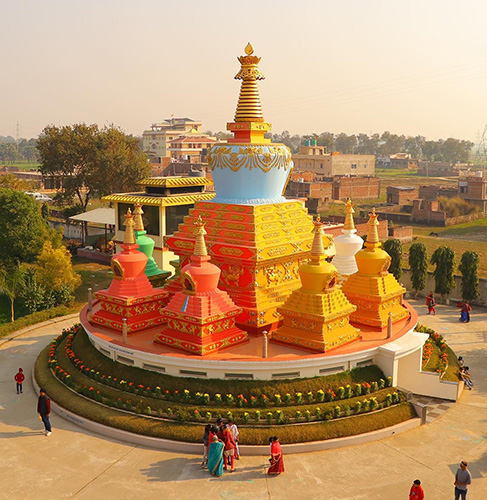 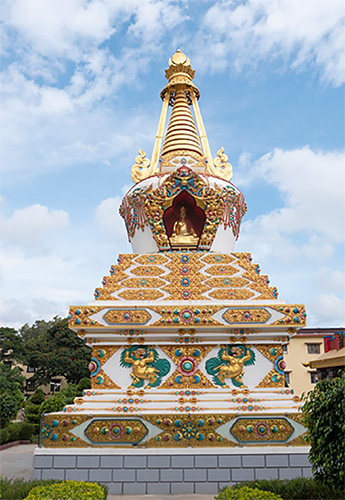 From the perspective of worldly knowledge, stupa - the reliquary monument constructed to enshrine the relics of the Buddha and other noble beings - has its origin associated with the caitya, the traditional burial mounds of ancient India.

But for the supramundane beings whose accomplishment in siddhi (ngödrup) enable them to recognise the true state of reality pertaining to the sensuous-sphere, form-sphere and formless-sphere, they behold the three realms of existence as the emanation of the spontaneous self-arising stupas, and the four continents surrounding Mount Meru at the centre of the universe, crowned aloft by the celeste realms of the devas, as the unsurpassable stupas - the expression of the four immeasurables - with two blessed reliquary stupas for each continent. All these stupas are in actuality inseparable from the enlightened mind of the buddhas.

When Radra, the malignant demon of self-pride, was subjugated by Hayagriva (Tamdrin) the wrathful emanation of Avalokitesvara, stupas manifested spontaneously at eight different locations in the saha world as the source of blessings of the eight wrathful dakinis (mamos) who are tasked with the responsibility to pacify human transgression and environmental abuse through the forces of nature by creating challenging conditions such as mishaps, disease and obstacles to tame the pride of self-obsessed beings who are the causes of the degenerating age (tsöpé dü). This heralds the advent of the stupas of shravakas, bodhisattvas and buddhas such as the eight sugata stupas which chronicle the important event in the life of Shakyamuni Buddha (Sangyé Shakya Thubpa) and are often constructed as a group of eight stupas.

Relics of the Buddha

According to the Mahaparinirvana Sutra, after the parinirvana of Shakyamuni Buddha, the holy relics of the Bhagavan was divided into eight equal portions by the brahmin Drona and distributed to eight groups of devotees which include:

Altogether, there were eight stupas for the relics, a ninth for the urn, and a tenth for the ashes. In addition, one tooth is honoured in the Trayastrimsa heaven, one tooth in the kingdom of Kalingpa, and one tooth by the naga kings.

2500 years later, King Asoka acquired a portion of the holy relics from the descendants of King Ajatasatru whose share of relics had miraculously increased by itself. The relics were used to build 84,000 stupas across the kingdom of King Asoka which included most of the territory of today Indian subcontinent, Afghanistan, Pakistan, Bangladesh and Nepal.

Another portion of holy relics from the Lotus Garland Stupa built by King Ajatasatru was invited to Tibet in the 8th century to consecrate the first stupa in the Land of the Snow at the Samye Monastery.

The Sutra of Sublime Golden Light described the significance of the Shakyamuni Buddha’s relics in the following manner:

“The relics of the Buddha
Were as small and as numerous as mustard seeds.
Were it not for a body of flesh and bones,
How could it be feasible to have relics remain
To benefit the beings of the world?”

In the Miracles Manifesting Sutra, the skilful means of the Buddha is described as follows:

In accordance to the Mahaparinirvana Sutra, Shakyamuni Buddha gave very clear instructions on how stupa should be constructed:

“His ashes are to be buried in a stupa
At the crossing of the four directions,
The unmoving hub of the wheel,
The place of enlightenment. “

The four directions represent four important events in the life of Shakyamuni Buddha:

There are many types of stupas that range from miraculously self-manifested to man-made. Here are some of the main types :

On the outer level, the universe as we know is part of one colossal stupa with Mount Meru as the central axis. On an inner level, the structure of our subtle body, our five aggregates of body and mind, and all our experiences of the world, arise likewise as an individual stupa which reflects and corresponds exactly to the configuration of a lokadhatu (jikten gyi kham).

As Buddhism spreads southward into Sri Lanka, Burma, Thailand; eastward to China, Japan, Korea and finally to Nepal, Tibet and Mongolia, the architectural style of stupa has evolved to assume a variety of structures known collectively as pagoda.  Stupa is thus referred to as tháp in Vietnam, sūdǔpō or tā in China, sotoba or tō in Japan, t'ap in Korea, and chorten in Tibet.

A great deal of benefits can be gleaned from the understanding of the architectural design of a stupa. Chorten, the Tibetan style stupa, for example, has evolved into a very different structure from the ancient Indian style of earth-mound stupa, yet remain correlating to the way how the universe is formed.

Chorten, which means ‘field of offering’ in Tibetan, symbolises the supreme attributes of the Buddha through the exterior design and the collection of precious items that are interred within. Chorten is build and presented by the devotees as the field of offering to the dharmakaya (chö ku) - the absolute body of the Buddha. It also serves as the focus of veneration to which the pure body, pure speech and pure mind are offered by the devotees to honour the omnipresent, all-pervasive tathagatagarbha - the ultimate buddha nature of the mind - that exists in all beings since time without beginning.

Design and the symbolic meaning of a stupa

Stupas may appear in a variety of sizes and shapes but the most common architectural design is usually consists of three parts:

A. The bottom part of the stupa:

B. The middle part of the stupa:

C. The top part of the stupa:

Inserted right through the middle of the stupa is a specially prepared wooden trunk called the tree of life force (sog shing). It serves the same purpose as the central channel of subtle energy that course through the middle of a living being from the crown to the perineum, and symbolises the Buddha family of Vairocana. It also represents the dharmadhatu - the absolute space of all phenomena - through the precious treasury that are interred within.

Stupa construction in accordance to the Buddha’s instruction

According to the Two Stainless Cycles (Drimed Namnyi) the methods by which stupas are built in Tibet are based on teachings given by Shakyamuni Buddha in the human realm and the celestial realm. In spite of the existence of a variety of exterior designs, the consecration for the interior in every stupa remains identical to this day.

The text of Drimed Namnyi stated that at one time, the brahmin Sergei Dawa, a non-buddhist teacher had a premonition through meditation that he would die within seven days. Frightened and powerless to change his own destiny, he went to Shakyamuni Buddha for help. The Blessed One confirmed his dread suspicion of untimely death and informed him that due to his store of negative karma, he will be reborn repeatedly in the lower and lower realms until finally being reborn in the hell realms.

Overwhelmed by shock, Sergei Dawa made request to the Buddha for means to nullify this imminent calamity. The Blessed One gave him the location of a stupa and said that if he would repair, refurbish, and reconsecrate this stupa, the merits he would accumulate will be sufficient to prolong his life and exhaust his store of negative karma, and when his present life finally come to pass, he will reborn in the pure realm of bliss. Sergei Dawa took the advice to his heart and used all his means to refurnish and to reconsecrate the stupa. Blessed by the transmission of the Buddha, and empowered by the diligence of his own unreserved effort, Sergei Dawa was able to restore health to his dying body and live for many more years.

At the request of Bodhisattva Sarvanivaranaviskambhin (Dripa Namsel), further elaboration were given by the Buddha on the choice of location, building materials, design, rituals, the way how mandalas, scriptures, dharanis (long verses of mantra), tsa tsa (miniature stupa), holy relics, precious offerings should be prepared, and how a stupa should be consecrated and sanctified.

According to Jamgön Kongtrul Lodrö Tayé, the most important texts to place inside a stupa are the Kriyayogatantra (Odzer Drimed) - Spotless Radiance Tantra - and the five classes of great dharanis (zung chen dé nga) which serve as the relics of dharmakaya (chökyi kü ringsel). These sacred texts energise and transform a stupa into the absolute body of the buddhas. The five classes of great dharanis are:

A stupa which has been consecrated and energised by the relics of dharmakaya is no longer a man-made burial monument but a sacred entity that can bestow blessings and amplify the potentiality of benefits, restore positive conditions for anyone who sponsor its construction, see it, touch it, circumambulate it, or hear the breeze that blow by it.

There is a legend in Bodhgaya which states that an underground crystal stupa exists beneath the bodhi tree - a stupa so powerful it will support and preserve this site of the vajra seat where all 1000 Buddhas of this aeon will attain enlightenment there.

Another legend in Kathmandu states that stupa has existed in the same site as the Swayambhunath Stupa during the time that spans from Visvabhu Buddha (Sangyé Thamché Kyob), Krakucchanda Buddha (Sangyé Khorwa Jik), Kanakamuni Buddha (Sangyé Sertub) to Kasyapa Buddha (Sangyé Ösung).  To this day, on the 15th day of the sixth lunar month, an apparition of the original stupa has been known to appear in the sky. A true testimony to the existence of stupa on earth, in the sky and underground since time without beginning.

This teaching entitled ‘Stupa - The Enlightened Mind Of The Buddhas’ is presented here by Tenzin Gyalpo Drakpa Gyaltsen Dondrup Dorje as his homage to all the Buddhas of the three times in ten directions.