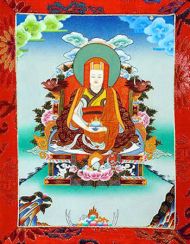 Gampopa (1072-1153C.E.) is the disciple of Milarepa and founder of the Kagyupa school of Tibetan Buddhism. In his most important work, The Jewel Ornament of Liberation, he brought together the teaching of the Kagyupa and Kadampa “as two streams flow into one.” In it, he gave the following advice, that any individuals wishing to attain liberation and omniscient buddhahood should remember the ‘Ten Causes of Loss’:

– Those are the Ten Causes of Loss –