Faith is more than a belief based on evidence not seen. It is a dynamic action which embraces the Universal Law of Due Season: You Reap What You Sow – the basis which gives rise to the law of cause and effect. Faith is not just a concept or a sense of feeling, it is in practice a manifestation of trust which opens up the window of possibility, for all things are possible to one who walks the path of virtue, and acts by the rightness of action.

Authentic travellers on the spiritual path are doers who live by the action of their faith. They act with kindness and compassion towards all sentient beings regardless of their creed or doctrine. When one examines closely the teaching of Lord Buddha and other great spiritual masters, one will notice a common theme: they all encourage their followers to forgive those who trespass against them and to embrace the action of virtue faithfully for the eternal good of all mankind.

In Buddhism, the emphasis is to adhere faithfully to the Buddha’s teaching of the Four Noble Truths and the Eightfold Path which bring salvation to the karmic condition of samsara - the continuous process of rebirth into suffering without control or the choice of freedom.

Through the understanding of the Four Noble Truths - suffering, origin, cessation and path, the path being the faithful implementation of the Eightfold Path - which includes the rightness of action in understanding, thinking, speech, effort, occupation, endeavour, mindfulness, and contemplation - corruptive influences which arise from such attachment as vanity, envy and ignorance are transformed into the living dynamism of the spiritual path. Descriptions of similar forms of teaching, which advocate the importance of attentive mindfulness and the choosing of virtue over non-virtue can be found among the pages of sacred texts.

Spiritual understanding is the result of an enlightened awakening attained under desperate conditions, where one’s faith in the action of goodness is being challenged, and during which one feels the presence of a power which is greater than oneself, leading one against all odds towards the dismantling of personal barriers. Faith is thus a personal commitment to a relationship of reverence and devotion with a higher sublime power, which is responsible for the cultivation and preservation of the action of goodness. But faith cannot protect nor make whole someone who is insincere about faith, for being aware of faith without corresponding action is not the same as hearing and living by the action of faith. 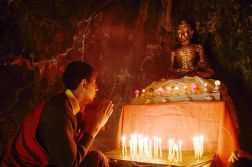 Without faith, it is impossible to cultivate the rightness of action, which leads to a harvest of the greatest good, for divine blessing does not come to those who do not follow faith. Deserters of faith are usually cynical by nature, prone to airing of grievance and mindless activities, short in vision, lax in discipline, and thus unable to free themselves from the bondage of non-virtuous desires, such as pride and envy. Those who walk in deception will fall by the wayside of deception, for no amount of self-deceiving or self-righteous excuses can override what is corruptive. If the seeds one sows are corruptive, the harvest one reaps will likewise be corruptive - this is the law of karma.

Trust comes naturally to those who have faith. They accept all life conditions with reverence and gratitude, knowing that the ripening of karma serves to prepare us for the ultimate journey of recognising the nature of reality. Without the foundation of insight and spiritual integrity accumulated from the practice of faith, one becomes easily enmeshed in the neurotic web of fear, lust and envy - the counter opposites of compassion, kindness and gratitude.

While lust is an avaricious desire for power or possession, which stems from the fear of oneself being in the land of eternal shortage; spite which evolves directly from envy is a malicious act of pre-meditated evil which has no desire for acquisition; its chief objective is to undermine, and to destroy whomever is perceived as a rival. To the spiteful eyes, the preservation of the fundamental goodness of humanity, and the realisation of other’s potential for the greater good, is of no concern. Fuelled by the dark, malicious forces of resentment, ill intention, envy, and a fixation of inadequacy, spite is pure evil to the core.

When one abandons faith - either out of a weakness in character, ignorance of the truth, or prompted by a surge of wayward arrogance - and walks the path of envy, one is committing non-virtue. Under the influence of duality, there is no middle ground for compromise or indifference, one is either doing good or doing harm; one is either part of the solution, or contributing to the problem. One who does not speak up against the work of non-virtue is the same as one who endorses the acts of non-virtue. If one chooses to do harm despite having knowledge of the truth, one becomes an advocate of delusion - the chief adversary of human aspirations and compassion. Delusion may appear real, but it is not the ultimate reality, for delusion cannot exist without one first relinquishing the power of control to the Lord of Delusion. No amount of non-virtue can cling to one who keeps away from non-virtue, for light attracts light, and darkness attracts darkness.

Those who have transgressed and given themselves to the lewdness of non-virtue, are of the non-virtuous, and cannot liberate themselves from the influences of non-virtue. Those who travel on the path of delusion do not know where they are going, because the power of delusion has blinded their eyes, and thus they condemn themselves to an endless, repeating pattern of conflict and despair, wherein they drift in between illusion and dissatisfaction, forever entrapped by the mental bondage of being in the land of eternal shortage.

The greatest damage to faith is caused by the twin evils of fear and guilt. Fear is what dissuades us from evolving forward in life, for fear, which arises from the rootlessness of insecurity and the realm of eternal shortage, is the instigator of all transgressions, and guilt is the mental debris left behind. Those who transgress often resort to guilt by either suppressing their conscience on what is just, and so walk in fear of the light, or they let their dark emotion incite them to commit more of the same foolishness, for evil pursues sinners, and whomever perceives evil as good, evil will not depart from his dwelling.

In contrast, the faithful travellers on the spiritual path surrender what they cannot keep, and transform the perishable fruits of impermanence - those of vanity, arrogance, ignorance and bondage of the flesh - into the eternal bliss of the spiritual path, and subsequently gain what they cannot lose - mindfulness, wisdom, peace, godliness and infinite grace - in the pure realm of abundance. 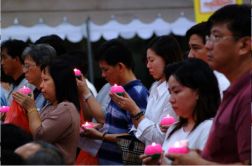 The blessing of wisdom is based upon a strong foundation of faith, and the understanding of the Universal Law of Due Season. The first principle of the Due Season is that you must have the rightness of knowledge, for a lack of faith is often the result of a lack of knowledge, when one does not know how to respond to the challenge of changing conditions. When one’s faith is based upon a misunderstanding of knowledge, whatever one may expect will likewise be misleading and unsatisfactory - in the same way as the captain of a sea-going vessel following a wrong chart will end up nowhere near the port of destination he set out to reach.

It is not good for a sentient being to be without the rightness of knowledge, for knowledge increases strength, but knowledge by itself is barren without the blessing of wisdom, for wisdom gives life and direction to those who have knowledge. Without the presence of wisdom, knowledge will corrupt the mind of the unsuspecting, and promote the growth of mindlessness - the principle cause of all human suffering. Mindlessness is the lawlessness of the mind. To those who are besotted with mindlessness, all things appear superficial and ordinary, with no provision of time-space for contemplation between stimuli and response. Their entire life resembles one huge claustrophobic experience of pretence and conceit, pre-occupied with fear, disappointment, cynicism, emptiness and false dreams, without the slightest inkling of the higher purpose of their existence, their true identity, or how to fulfil their destiny, other than to content themselves with the prospect of mere survival in the land of eternal shortage.

Without faith, wisdom will not come forth, nor will there be a dividend that is worth keeping, because one cannot reap what one has not sown, for faith is the foundation of due season, and the due season always comes. One who yearns for power in the absence of wisdom will inevitably ruin not only their own life, but also other people’s lives, through ignorance, conceit, lack of vision and misapplied knowledge.

Transgressors dare not come to the light, for fear that their transgression should be revealed. Instead of seeking repentance or turning to those who are qualified for guidance, they resort to either seeking counsel from unholy prophets and wandering spirits, or increasing their effort to conceal the truth by attacking the virtuous. Professing to be clever, they became fools of mindlessness.

Lineage blessing cannot be transmitted through clever discourse, but only through an authentic relationship between the lineage master and the disciple. One who walks the path of the virtuous, and acts by the action of compassion, will by the action of faith, form a partnership with all things that are wholesome. He who has been thus blessed fears no evil spirit - as he attends to ministering the rightness of action, demonstrating the wonders of divine power, and healing all who are oppressed by the devil - for the will of the divine is with him.

With faith one is capable of becoming a courageous warrior, for each of us has the same potential to become truly enlightened. So one should think highly of oneself as a spiritual being, and be mindful of how one sows, for one who sows to one’s flesh and mindlessness will reap corruption, but one who sows to the spirit and the rightness of action, will reap eternal bliss, for faith is the foundation of due season, and the due season always comes.