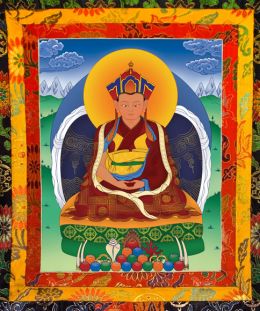 Karma Lhawang was the nephew of Kunzang Sherab. He exhibited signs of recognising the true nature of the mind and demonstrated adept attainment in Dharma practice since childhood. His early years were spent at his uncle's former quarters atop the Dzong-nang mountain where his root guru Karma Tashi transmitted to him all the teachings and essential practices of the Palyul tradition.

As the fifth Throne Holder of the Palyul lineage, Karma Lhawang had little interest in the running of the monastery. Instead he preferred to immerge himself in the pure nature of practices and spend most of his time in solitary retreat. The day-to-day administrative side of the monastery was left to his disciples Ah Sam and Lama Wangchug, while Karma Dondam, a heart disciple of Karma Tashi was tasked with the maintaining of the lineage of empowerment and transmission.

Karma Lhawang exhibited many signs of pure mind accomplishment consistently throughout his life until it was time for him to depart for the pure realm.