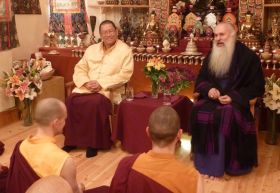 The Archbishop of the Evangelical Baptist Church of Georgia in the Caucasus region of Eurasia, His Excellency Malkhaz Songulashvili visited Ven. Lama Dondrup Dorje in late November on a fact finding mission to learn more about Buddhism. Over the period of two days, Ven. Lama Dondrup Dorje spent time with the Archbishop during which informal discussions were held and insights on different topics were exchanged.

Throughout their time together, Ven. Lama Dondrup Dorje answered questions from the Archbishop that covered a wide range of subjects such as love and compassion, the development of wisdom, the beginnings of the monastic tradition within Buddhism, the role of the lama, and the growth of Buddhism around the world. Both share the common recognition that the foundation of spiritual practice should begin from the cultivation of being a good person first, and true learning can only come about through the direct experience of actual practice instead of indulging in conceptual speculation without action. 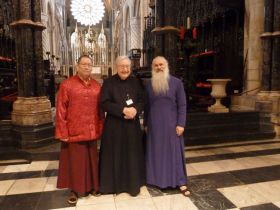 To ensure Archbishop Songulashvili had the opportunity to sample what the Northeast has to offer, trips to various places of interest were arranged which included having dinner in a restaurant housed in the premises of a former Friar Priory which was founded in AD 1239, and a tour of the historic Durham Cathedral, a world heritage site which dates back to AD 1093 and is renowned as the only cathedral in England to retain almost all of its original Norman Romanesque architectural design. 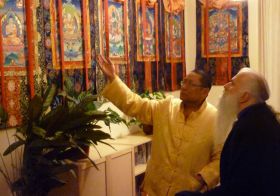 On his last evening in the Northeast, the Archbishop visited the local Pathgate Dharma Centre and on the invitation of Ven. Lama Dondrup Dorje gave a talk to the local students. The Archbishop began with an expression of profound gratitude for the warm hospitality he had received during his visit, describing how he had learnt a great deal and felt deeply enriched through his encounter with Ven. Lama Dondrup Dorje. The Archbishop then went on to share with the students his personal experience about his journey as a Christian minister. He encouraged the students to leave their comfort zone and care for the wider human family, not just those belonging to a certain religion or people. When the Archbishop’s talk came to an end, Lama Dondrup Dorje reiterated to the students that it is we who separate ourselves from others by labelling others, by judging others and by our desire to take control, creating conflict and even war in the process. 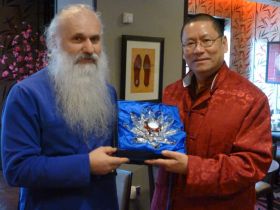 At the banquet given in honour of the Archbishop the following day before his departure, the Archbishop presented a large crystal lotus flower candle holder to Ven. Lama Dondrup Dorje as a gift to commemorate their friendship . He then invited Ven. Lama Dondrup Dorje to visit him in Georgia, and expressed his wish that the time they had spent together would mark the beginning of a long-lasting relationship between them.