An Interview with Lama Pasang 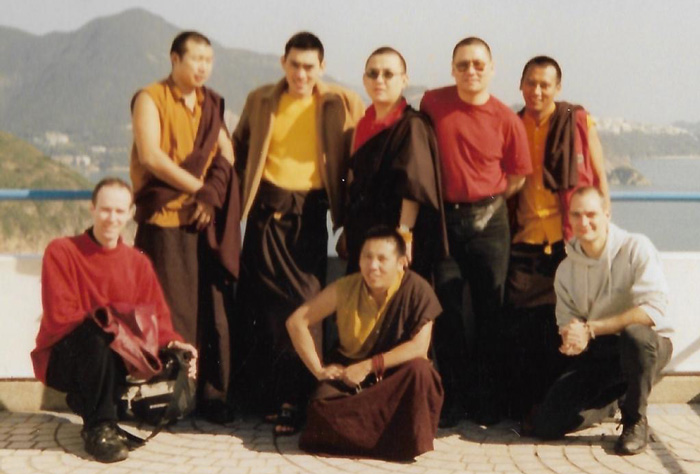 Lama Pasang was born in Dolpo, a village 26,000 feet above sea level, next to Tibet in western Nepal. In 1986 at age 16, he went to Mysore, India to receive ordination to become a monk at Namdroling Monastery. In 1991, he started his study at the Shedra - Ngagyur Nyingma Institute of Higher Buddhist Study. In 1998, while he was in the 8th class, he was sent by the Shedra to Dzogchen Monastery where he taught for one year. In 2000, he became a member of a small group of attendants who accompanied His Holiness Pema Norbu Rinpoche on his travel around the world and served the position as Omsay - Chant Master. He is currently the resident Lama of the Palyul Dharma Centre in Austin, Texas. In September 2019, during his travelling around Europe, Lama Pasang gave an interview before the ordained sangha at Pathgate Institute in Newcastle, England.

Question: Do you have any recollections of the time you spent with Sifu Rinpoche and the time he spent travelling with His Holiness? (Sifu Rinpoche is a term of reverence used by student of Lama Dondrup Dorje Rinpoche when they address him.) 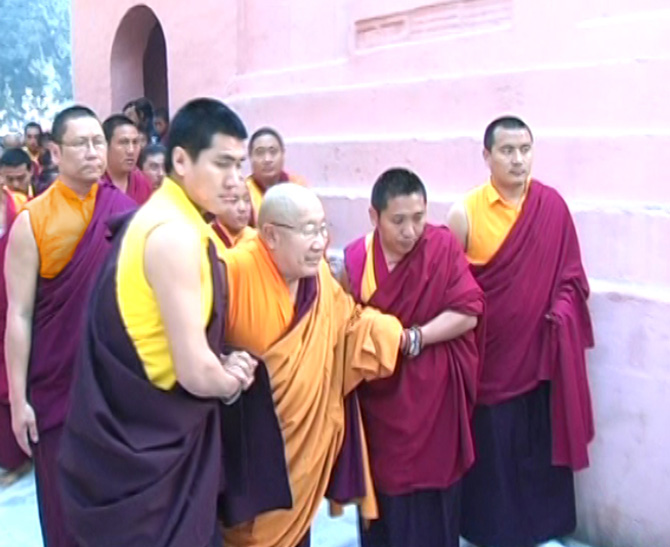 Lama Pasang: I have many memories of Sifu Rinpoche since we first met in 2000. He had very strong devotion to His Holiness and was always around His Holiness during Holiness's travels around the world. He attended the annual summer retreat in upstate New York for many years and was given the task of looking after the main temple and assisted the Choepen (Ritual Master) in the performing of daily ritual and puja. He also took responsibility of sourcing all the offerings that were needed for the retreat, which often involved spending a lot of his time and money in doing so.

During our tour in different countries, he would always stay close to Holiness to ensure Holiness was not unduly disturbed by the masses of devotees that approached Holiness. He was also known for the photographs he took of Holiness. Many of his photographs are highly valued by followers of His Holiness and can be seen at many centres including the Palyul Mother Monastery in Tibet.

Over the years, Sifu Rinpoche sponsored many projects at Namdroling Monasteries such as construction of buildings to provide classrooms and sleeping quarters for the Shedra students, equipment and medicine for the clinics, computers for the Shedra Editorial Committee, translation of Buddhist Texts and many other projects for the junior school and the Nunnery. Not only that, Sifu Rinpoche has always been a very big supporter of other centres at the time of their needs. That means he has a very strong devotion to preserve the lineage of His Holiness. He valued Namdroling Monastery as the best place of higher learning and had received many transmissions from his many Khenpo friends there with the blessing of His Holiness.

Personally, whenever Sifu Rinpoche joined Holiness on our travel, we worked together, ate together, received many teachings and empowerments together. Spending time around Holiness was always very special family moment for all of us. We were and still are one family in a single mandala. That is the reason why we still keep contact all these times.

Question: We’ve heard that His Holiness acknowledged Sifu Rinpoche as a Dorje Lopon. Could you explain a little bit about what that means, and the story of how that happened. 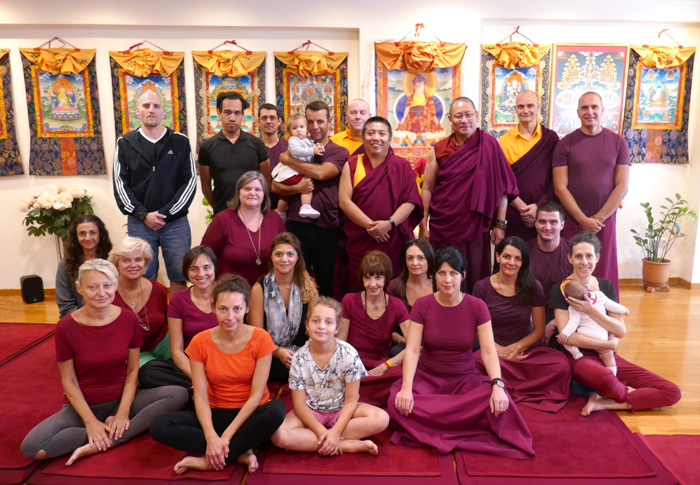 Lama Pasang: Sifu Rinpoche was very close to His Holiness. Whenever he was about to return to the UK, Holiness would offer him guidance and gave him many ritual items from his own collections like statues or stupa. The last time I saw it happen was in Bodhgaya when I was asked by Holiness to bring a set of Bell and Vajra from his room and gave them to Sifu Rinpoche. Then Holiness said to him, “Now, you are Kerang Dorje Lopon Jing.” This means now you are Dorje Lopon - Master of Vajrayana practice.

Question: Could you share some advice about our daily life as monks and nuns?

Lama Pasang: Daily life of monks and nuns should revolve around Buddhist practice. When you have received ordination vows from Holiness, and until you die, our whole lives are part of the practice in maintaining our commitments to the Refuge Vows, Bodhicitta Vows, Pratismoskha Vows, and so forth. The ordained should live, practice and rejoice together in performing dharma activities. Living as monks and nuns is one of the happiest of lives. You don’t really have many worries, less thinking, and less worldly activities. Our main responsibility is to offer benefit to all the sentient beings of the world. What we do, we dedicate to them, we help them, guide them when it is possible to do so, because different people have different belief and conditions. When someone wants to learn Buddha’s teaching, we can share with them the message of the Buddha. If nobody wants to listen to our message, we can always go to a zoo, recite mantras to the ears of the animals.

All these Sadhana that we are chanting here are totally the speech of the enlightened beings. If we understand the meanings, of course we get more benefit. Even if you don’t really understand the meaning, but you have very good, pure intention, also you get benefit. When you purify your negative words from the speech, then more positive words will come out. Your vow is with you at all times. When you go to the rest room or take a shower, you can recite Om Benza Sato mantra. This is like, “I am cleansing my negativites.” 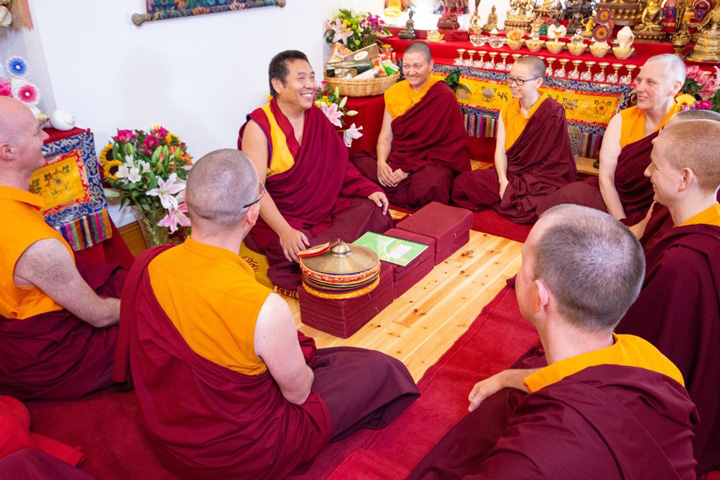 There is no single moment we cannot perform Dharma practice. Before going to bed just sit and reflect what you did that day. If you have done something good then make sure you dedicate and rejoice. If you made someone angry, some mistake, maybe somebody was not happy with you that day, just keep that person in your mind, “I am so sorry about what happened.” If there was misunderstanding between you and others, purify it with Vajrasatto or Root Lama practice and offer forgiveness to any injustice that has happened to you.

Before you go to sleep, visualise the Root Guru seated in a lotus flower in your heart. And the whole night your sleep becomes Dharma practice. Always keep your teacher in your mind.

Question: Could you share with us the meaning of Namdroling?

Lama Pasang: Namdroling means the land of liberation - the liberation from the three poisons of grasping, aversion and ignorance. The full name of our monastery is Thegchog Namdrol Shedrub Dargye Ling. Theg, means head of the nine thegpa (vehicles) that include Theravada, Mahayana and the Vajrayana tradition of Mahayoga, Anuyoga and Atiyoga. Shed means teaching, Drub is drubta which means the practice. Dargye Ling means an institute of learning - the learning of the three baskets of the Buddhas and the Vajrayana vehicles. A place we usually referred to as Shedra.

Question: Could you share with us how we can improve our chanting? 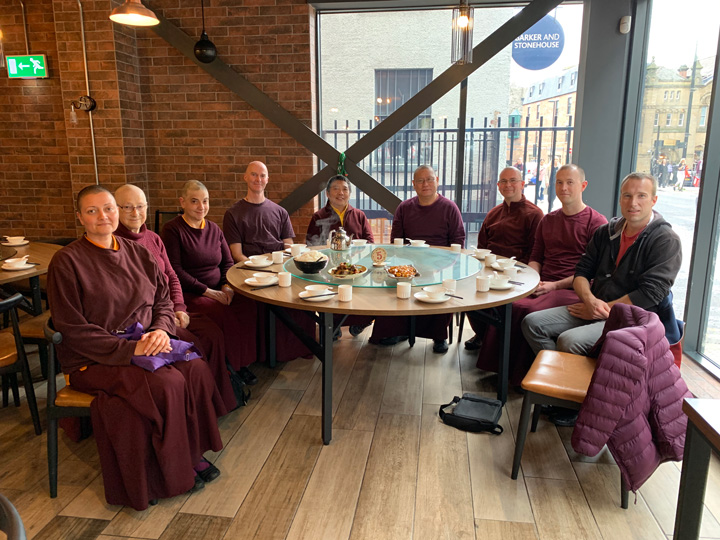 Lama Pasang: To improve we need to do more practice. In the beginning read the text slowly. If you are chanting loud it is easy to memorise. You need to know the meaning of the chanting, the reason of why you are doing this. When your mind focuses on the meaning of the text, your mind is filled with the loving kindness and compassion of the enlightened beings, then there is no time for any negative thought. When loving kindness abounds, we are free from the influence of anger. If you don’t have anger in your mind, the whole day your thoughts become that of compassion and free us further from the influence of ignorance. The presence of ignorance supports the arising of anger and desire which cause our actions to become negative.

The message of Buddha is that this universe is bigger than you and me. It does not revolve around just you and me; how all things may turn out depends on how we focus our mind. Thank you for your patience in listening.