The Pathgate Winter Retreat 2011 took the form of a Retreat on Classical Medical Qigong Foundation Study, and was attended by students from countries of origin that include Hong Kong, China, Tibet, Singapore, Japan, Mexico, Romania, Greece, Cyprus, Israel, Italy, Belgium, Netherlands, Ireland, USA and the UK. 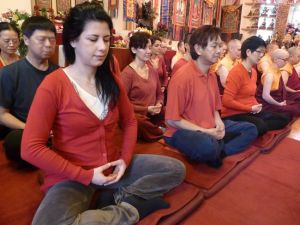 The Retreat began at 8am each day with group practice of Tara puja to help clear obstacles and remove the eight great fears. In addition to Dharma teaching and Classical Qigong, students received daily Audio Teachings that covered the first 12 parts of a 40 part commentary on the Heart Sutra of Great Perfection of Wisdom by Ven. Lama Dondrup Dorje. They also had the opportunity to practice Buddhist meditation, and join in with the resident ordained Sangha for the Mahakala Protector sadhana as well as the morning and evening prayer practices.

At the Retreat, Ven. Lama Dondrup Dorje explained Classical Medical Qigong is a Buddhist practice working with the purification of energy in the body to bring mindfulness and tranquillity to the mind. He reminded students that the whole purpose of Buddhist practice is to attain a state of awakening from the mundane affairs of the world that we falsely perceive as real but is in fact no more than an illusion we create and label with our conceptual mind.

Sickness comes about chiefly because of our fixation with the three poisons of attachment, aversion and obscuration. When we cannot come to terms with the turmoil that comes with the three poisons and instead rely on self-denial by turning our attention to a diversity of distractions, the resulting afflictive emotion will still cause a surge of disharmony in the circulation of energy in the channels and organs of the body which leads to the manifestation of sickness. While Classical Medical Qigong can help to remove the physical symptoms of karmic ripening, we ourselves need to remove the causes of the negative karma we have generated in the past and avoid creating more non-virtuous causes in the present. To do so requires training the mind to enable us to cut obscuration at its root. Authentic Buddhist practice is about how to deal with the suffering and difficulties we encounter in our lives without giving cause for turmoil to arise in the process. 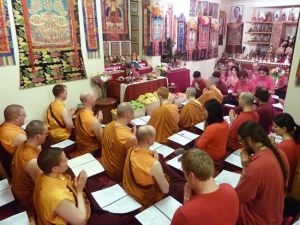 Students at the Retreat also had the opportunity to participate in the practice of Dor Sem Lama Chodpa (Vajrasattva Guru Devotion practice), which were held in consecutive evenings following the passing into Parinirvana of Dungsei Thinley Norbu Rinpoche, as well as the Medicine Buddha Puja on the penultimate evening of the Retreat.

On the last day of the retreat, one Tibetan student from Eastern Tibet was so inspired by the teaching he received that he composed a Tibetan song and chanted before the congregated sangha in praise of Ven. Lama Dondrup Dorje as a great compassionate bodhisattva who works ceaselessly for the benefit of all beings.