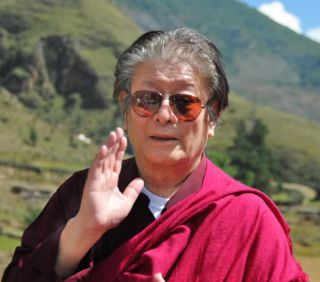 Dungsei Thinley Norbu Rinpoche, a prominent master of the Nyingma lineage entered parinirvana in the United States on the 27th December 2011. He was 80 years old.

The eldest son of HH Dudjom Rinpoche and the father of Dzongsar Khyentse Rinpoche, Dungsei Thinley Norbu Rinpoche was the incarnation of Tulku Trimé Özer, who was one of seven sons of Dudjom Lingpa, and was also considered to be an emanation of Longchenpa. In his youth in Tibet he studied for nine years at Mindroling Monastery. He later spent most of his time propagating Buddha Dharma in the USA.

Before his passing into parinirvana, Dungsei Thinley Norbu Rinpoche left instruction for his devotees to perform Vajrasattva practice for three weeks. There is special blessing to perform Vajrasattva practice after the passing of a Realised Master because the enlightened intent of such a master, whose every act is only to bring benefit to all beings was born into this world as an act of compassion. Devotees who perform Dor Sem Lama Chodpa practice at this time will receive the blessing of making connection with the wisdom mind of Dungsei Rinpoche and in the process purified negativity and generated great store of merit.

Dungsei Thinley Norbu Rinpoche's body will be brought to Bhutan after 21 days. The Kudung will first be taken to the Ranjung Yosercholing Monastery in Ranjung. The final rites are to be performed at Lango in Paro.