In response to a request from the Women’s Group at a local church in Newcastle upon Tyne, England, Ven. Lama Dondrup Dorje gave a talk at the Allen Memorial Methodist Church in September to an evening meeting of the group. 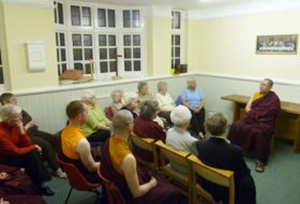 Highlighting the common ground between all religions, of encouraging followers to become a better person and to develop their capacity for love; Ven. Lama Dondrup Dorje gave the example of Mother Teresa and her many years working in India. Speaking of different paths followed in all religions, be it in helping others directly or in adopting the life of a hermit in retreat, they all share the common goal of transforming everyday activity into a living action of love for the benefit of both others and ourselves.

Giving an explanation on the Buddhist perspectives on the Five Vehicles of Spiritual Practices, Ven. Lama Dondrup Dorje used examples from the Bible to show that the teachings of Jesus were no different to the Buddhist teachings which encourage their followers to be a good person, to be helpful to others, to love thy neighbour, and to share our good fortune with others. Ven. Lama Dondrup Dorje went on to explain the benefit of seeing the world without putting labels on it; recognising that all beings are the same, we all want happiness and all want to be free of suffering.

After the Talk, Ven. Lama Dondrup Dorje was given a tour of their church during which more questions were put forward by members of the women’s group wishing to know more about the daily practice of a Buddhist and about how to promote happiness in one’s life. Ven. Lama Dondrup Dorje answered all their questions and finished by describing the great work of his Root Guru, the late Holiness Penor Rinpoche and giving everyone in the group a gift of the DVD ‘The Compassionate World of H.H. Penor Rinpoche’.